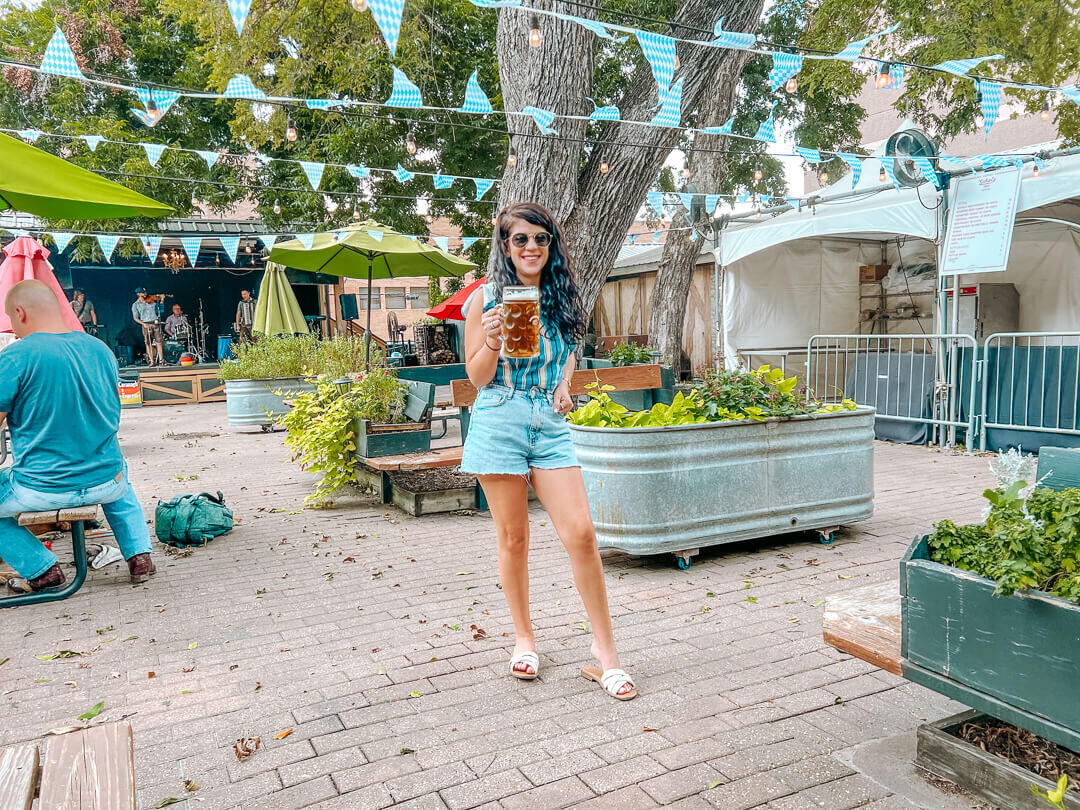 What makes a great beer garden? To me, and the German definition, it’s long picnic tables and trees to provide shade– beer on draft, and pub eats, such as large, soft pretzels. And Austin, Texas is home to many spots featuring just that.

With native Live Oak trees acting as nature’s patio umbrellas, the beer gardens here just hit different. With cooler weather on the way, you’ll definitely want to save this list of the best beer gardens in Austin.

What is a Beer Garden?

First things first… What is a beer garden, officially?

According to German tradition (and Wikipedia), a beer garden (or biergarten in German), most simply, is an outdoor area where beer and food is sold. Originating in the Bavaria region of Germany, they are usually attached to a brewery, beer hall, pub, or restaurant.

Not every pub with a beer offering and a shady outdoor area is a beer garden though. So let’s talk about what else is and isn’t a beer garden.

First of all, this list won’t be places with nice patios that serve beer. No, Austin has its fair share of beer gardens that follow the German tradition. We don’t need to stretch the definition too far. (Here’s a great article if you’re curious to learn more about the German influence in central Texas.)

I’ve picked these 14 beer gardens from personal experience of traveling all over Austin in the search of the best places to drink beer. To help you navigate through these amazing spots, I’ve also created for my readers a handy and interactive Proxi Map:

I’ve loaded each spot on the map with helpful tips and additional photos:

To earn a spot on this list, each one of Austin these beer gardens meets most, if not all of the characteristics as described earlier. That, plus, rest assured all of these places are places that I’ve actually been and that I love.

Alright, let’s get into it!

Here are the 14 best beer gardens in Austin (listed alphabetically)!

Armadillo Den offers its beer garden as a gathering place for locals to enjoy live music, food trucks and drinks on drinks. Since opening a few years ago, Armadillo Den has become one of South Austin’s most popular outdoor spaces to spend an afternoon or evening sipping on cold brews and enjoying great music.

Their list of offerings is impressive, so whatever you opt for, you can be sure to enjoy some great local craft beers in their shady outdoor area.

Tip: Parking here SUCKS. The lot is distressingly tiny and all of their neighbors do tow. The good news is they will give you 10% off your tab if you take a rideshare.

A classic in Austin’s craft beer scene, Austin Beer Garden and Brewery (called The ABGB by locals) has the quintessential outdoor beer garden space. Just instead of pretzels, you can order a pizza pie to share with the crew.

This outdoor brewery features all the best beer garden traits too: shade from large trees, communal picnic table, and a neighborly vibe that radiates through the place. Indoors though is just as hip and spacious. Side note: their live music stage is one of my favorites in Austin!

Banger’s is one of the most popular locations on Rainey Street, and one that has stood the test of time. Featuring long picnic tables in a large outdoor area, you’ll find a menu featuring all of the smoked meats, plus over 200 types of beer!

This Austin beer garden is a really fun place to come for brunch with a group of friends. So call up your besties and get ready to hang out in one of the best places to drink beer outside in downtown Austin.

Words do not exist to describe how much I adore Batch’s large and shady beer garden. This coffee shop/kolache bakery/craft brewery provides both indoor and outdoor spaces for all types of visitors.

You’ll find families with children outside playing on the grassy mounds and larger-than-life mushroom caps. Inside the cozy cafe, you’ll find people working, enjoying ‘fancy’ kolaches and a latte, or a beer depending on the time.

The Brewtorium is one of Austin’s breweries that prides itself on following German tradition when it comes to their beer. You’ll always find a majority-lager tap list here. Which is perfect because their beers, my favorite is their Vienna Lager, pair perfectly with their soft pretzel and its trio of dips.

Once you grab your beer, head down the long, long hallway to the back of the building where you’ll find Brewtorium’s shaded and breezy beer garden. There are plenty of picnic tables for large groups. And on the evenings and weekends, they have a second bar out back, so you won’t have to keep making those long hauls!

Everything about Central Machine Works is MASSIVE. Their outdoor beer garden is expansive, their indoor beer hall is filled with towering tanks, and sitting on their bar is a giant 18,000-pound lathe. Why? This building used to be a 1940’s machine shop that repaired airplanes!

This spot is one that you definitely must see for yourself. Along with the beers, Central Machine showcases local art in the taproom, as well as live music outside, and a food menu with amazing burgers.

Cosmic Coffee in South Austin has a lovely garden and massive dog-friendly outdoor area that was made to hang out with your pup. The beer garden showcases stunning landscaping intertwined with a pond and a chicken coop.

This place is fun to come to work or to find a delicious bite to eat. The on-site food truck features 3-5 rotating food trucks so there will be something to nom on for everyone!

North Austin isn’t home to many of the beer gardens on the list, but Draught House is by far this list’s best kept secret. Tucked away, just a block off of Burnet, you’ll find an experience similar to pubs in England.

With lush trees, rows and rows of picnic tables, plus dozens of house-brewed and guest beers, you’ll find yourself in heaven. There’s also a food truck on site should you come (or become) hungry!

Easy Tiger is a tried-and-true Austin establishment. With 3 locations around town (North, South, and East), Austinites everywhere flock to this beer garden and bakery every day of the week. If you’re looking for the most authentic feeling beer garden, you’ll want to head to the north one!

Along with being a beer garden, Easy Tiger also is an amazing bakery that supplies many local eateries around town with their breads. Order loafs, baguettes, or giant pretzel to enjoy alongside a delicious local craft beer.

Koko’s Bavarian is one of the newer breweries in East Austin, and they made a splash from day one. This German brewery and biergarten is named after one of the partners, Koko— aka Konstantin Prinz von Bayern, who is the Prince of Bavaria. His family started Oktoberfest in Germany in 1810.  So yea, this place is pretty legit.

Alongside their beers, Koko’s offers plenty of authentic German food such as sausages and schnitzels. If you’re feeling adventurous you’ll want to definitely try the rattlesnake sausage!

Live Oak Brewing, best known for their award-winning hefeweizen, is one of Austin’s original breweries. While their taproom inside indoors is beautiful in its own way, the outside really showcases the beauty of a well-planned beer garden. A large Live Oak sits center and sprawls out over picnic tables in every direction.

I love recommending this Austin brewery to visitors as it features beautiful Live Oak trees and is just a short few minute drive from the Austin airport. Whenever I come back home from one of my long travels, Live Oak is my first stop (followed by P. Terrys for some burgers…)

Located in South Austin, Meanwhile Brewing is another massive beer garden and brewery. Outdoors, there are dozens and dozens of shady trees around the property, with plenty of picnic tables for groups, or adirondack chairs for solo imbibers.

Their space also features a soccer field, outdoor stage and private events venue, as well as a fun playground for kids. While they don’t have any food of their own, there are 3-4 food trucks on-site that rotate every few months.

With 10,000 square feet of shaded outdoor space, Saddle Up is more than ‘just’ a beer garden. It’s also a local grocery, bakery, espresso shop, and home to the beloved Micklethwait Craft Meats.

When it comes to drinks, Saddle Up offers several beers on tap as well as a list of cans and bottles. But they also have an impressive selection of natural wines! If you’re into that type of thing of course…

Last but not least, is the oldest place on this list (and one of the oldest in Texas!!). In fact, Scholz Garten is the oldest bar in Texas, so you’ll get to enjoy a little slice of Texas history while you and your dog enjoy beers and German-style food.

This beer garden came to be in 1866, when German immigrant August Scholz opened his public bar and cafe. Needless to say, it quickly became a favorite meeting place for the German population in Austin.

Today, it features many of the same traits from a long list of German beers to a menu full of German eats! The beer garden outside is shaded and dog-friendly, with a stage for live music in the evenings.

Looking for More Austin Beer? Check Out These Posts

Well, if you’ve made it this far, thank you! I truly hope this list and my that Proxi map helps you to find the best Austin beer gardens. And please, get out there and support these local businesses.

If you need more help learning about the amazing Austin beer scene, I have these posts loaded and ready to go for ya!

Disclaimer: This post was created in collaboration with Proxi. All opinions and ideas expressed are 100% my own. Thank you for supporting the brands that support this blog!

Ultimate Guide to the Best Beer Cities for Your Next Beercation