Here are my top picks and you’re not gonna want to miss any of these! From anniversary parties and costume contests, to meeting the real Hans’ of Hans’ Pils, Austin Beer Week 2016 is going to be the best yet. Since we can’t attend all the events (if only they could invent a way to be in two places at once..), I’ve gone through and picked out what I think are the week’s highlights of Austin’s craft beer community.

Head to Circle Brewing to kick off Craft Beer Week with their Halloween Party! Starting at 5pm there will be contests and giveaways, special casks, and Texas Chili Queens Food Truck will keep you fed.

At the new Central Market Growler Station,  20 different drafts on tap will be available on a daily basis.  Brews to be featured during the grand opening include Electric Jellyfish IPA and Fully Adrift  from Austin’s own Pinthouse Pizza.

Perhaps, one of Austin Beer Week’s most anticipated party, (512) Brewing is celebrating their eighth birthday with live music, food trucks, local vendors, and more than a dozen special releases.  The party begins at noon and you can buy a $15 ticket at the door. Your ticket comes with samples and a commemorative glass. Apparently dogs are allowed, and it’ll be a kid-friendly event.

Draught House turns 48 on Saturday as well and they’ll be kicking off their birthday celebrations at 1 with live music from Dead Music Capital Band and a DJ later in the evening. Come play some beer olympics as well and win some awesome prizes.

*disclaimer: this day is gonna be BUSY- but only because it’ll be full of fun events celebrating the diversity of Austin’s craft beer community

Start Sunday off by visiting Austin Homebrew supply for pumpkin pancakes and mimosas! (and special pumpkin ales if you don’t need a break from all of the craft beer) Starting at 10:30, there will be great deals on supplies and the pancakes come with a special marley syrup. The event is free, but the guys are asking to please RSVP on their event page so they can make plenty of pancakes for everyone.

Starting at noon, come party with Cuvée Coffee! Bring your costumes (dogs too!) cause there will be contests starting at 3, and the prizes are pretty rad. After the contests are the live music acts but all day there will be parking lot games, free Black and Blue cans, surprise freebies, and guided tastings of local beers with Cuvée’s beer educator! DD’s: you guys will get free @cleancausewater sparkling energy drinks!

Event is free but the guided beer tastings are $9 at the event.

Dress Up for Dress for Success with Ladies Craft Beer Community

Also starting at noon, Beer Necessities, Girls Pint Out and Pink Boots Society of Central Texas have teamed up to bring you this event being held at Wright Bros. Brew & Brew, brings together the various women’s craft beer groups along with beer professionals to learn about and enjoy craft beer. The event is open to all women that love craft beer as well as being free!

There also will be a raffle of swag donated by participating breweries to benefit DFS. Plus,there is a drive collecting items like clothes, toiletries, makeup items, etc., that will be donated to local ladies in need. To add to the event’s theme, a local LulaRoe mobile boutique will be there donating 25% of sales to DFS Austin.

Later in the afternoon, 2-4pm to be exact, Yard Bar will be throwing down for Hans’ Fest with guest appearances from Real Ale’s head brewer and the dog himself- Hans’!  There will be giveaways, plinko, and photo ops while Real Ale has a tap takeover.

There are 90 very limited tickets that will be for sale at the door. A $20 ticket gets you 50z samples of each beer.

Come to Easy Tiger around 6pm to see a sour beer showcase from Blue Owl’s owner and brewer, Jeff Young. The seminar is free and there will be $10 flights of four 3oz pours of Blue Owl Sours. Flights are available 4:30pm to close.

I’ll be wearing my Halloween costume one last time at Hopfields’ industry party night featuring an Austin Beerworks tap takeover. I’m looking forward to connecting with the people who make Austin one of the best craft beer communities in the country.  There will be limited release kegs and free glassware from local breweries. There’s also talk of glitter bombs- you’ve been warned.

Show your love for Everything EAST – this is the place to come and enjoy all the great beers brewed in East Austin. Beginning at 6pm, Chef Thomas will be pairing some great eats to enjoy with awesome beers from Hops & Grain, Live Oak, Zilker, Friends & Allies, EastCiders and Blue Owl. East Austin Hip or not, you won’t want to miss this mash up of neighborly love!

Come down to WhichCraft Beer Store at 6pm because (512) Brewing will be sampling the 2016 Wild Bear. Also, WhichCraft are going to release some of their older bottles from the cellar for you to purchase!

Meet the two Lady Brewers behind the secret beers that are sill in the tank! The gals will be at School House Pub from 6-8pm

From 6-8pm Zach from New Belgium will be pouring samples of the new Ben & Jerry’s Ice Cream beer as well as some old favorites!

From 6-7pm, Jester King will be at Easy Tiger for a special Austin Beer Week treat. Brewery founder Jeff Stuffings will be presenting a flight of four beers from the brewery: Le Petit Prince, Snorkel, RU55, Fēn Táo and Atrial Rubricate. Tickets are $25

What better way to kick off your weekend than to grab a Circle brew on South Congress? Come to Jo’s Coffee starting at 11am and all Circle brews will be $4 (and you get to keep the glass)!! Event goes until they run out of pint glasses, so get there ASAP.

Red Horn has teamed up with Real Ale for a monumental collaboration. Malty, assertive, and balance, the ALTimate Warrior Altbier will shake your taste buds. They’re unveiling their new brew at Red Horn in Cedar Park beginning at 4pm.

This event Saturday afternoon is the perfect intersection of beer and wine. From 2-6pm, Hops & Grain will be sampling up flights of three versions of their Word Beer Cup Gold Medal Winning Altbier: ALTeration. Alongside samples of the exact wine that was aged in the barrell used to make the Alt variants. So cool!

Contemplating Waterloo is returning! This highly sought after limited release will be available on tap and in bottles to go in our our awesome barrel-line taproom. Event starts at 1pm. Hootchcakes will be performing 7-9 pm. Free games including giant Jenga, Foosball, corn hole and hula hoops. Plus, food truck on site.

Amy Afflerbach from Goose Island will be sampling out the 5 Sour Sisters (Gillian, Halia, Lolita, Juliet, Madame Rose), plus Matilda & Sofie. This is a huge don’t-want-to-miss event. It’ll be going on from 12-2pm.

What better way to get back on your feet after an amazing week than to get some omelettes and Bloody Marys made by the team at Austin Homebrew Supply?! These will not be your ordinary omelettes or Bloody Marys, these are Chef Dan made and inspired. You won’t be disappointed. Come recover from Austin Beer Week from 12-3pm.

Close out Austin Beer Week with a relaxing Sunday and check out art from 10 Austin artists from 12-4pm. There will be a variety of artists showcasing jewelry, various mixed media artwork, all natural homemade soap, beard oil, furniture and more!. Kick Drum Burgers will be onsite 1pm-6pm and and enjoy the 8+ beers on tap! 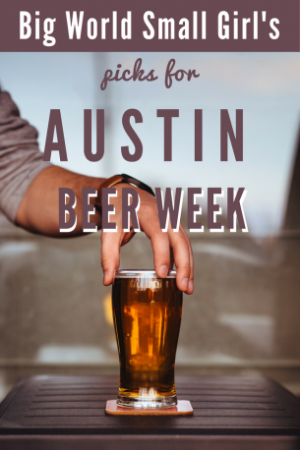 Pin this to save for later!

So that’s it you guys! I am so excited for each of these events and I am probably going to be exhausted by the end. It’ll be good though and I look forward to meeting new people and hopefully some of you all reading this!

There’s a good chance I missed a cool event or an important detail so please feel free to comment below and tell me what you think I shouldn’t miss during Austin Beer Week.

I’ll be doing a follow-up post of interviews and special release beer reviews so make sure to subscribe so you’re always up-to-date with my newest posts.

Meet the Brewery Architects Designing the Next Generation...

7 Things You Should Know About Austin’s Circle...