Home » Austin Travel Guides » Where to Drink in Austin, Tx » 13 Austin Brewpubs to Fill up on Delicious Food and Craft Beer 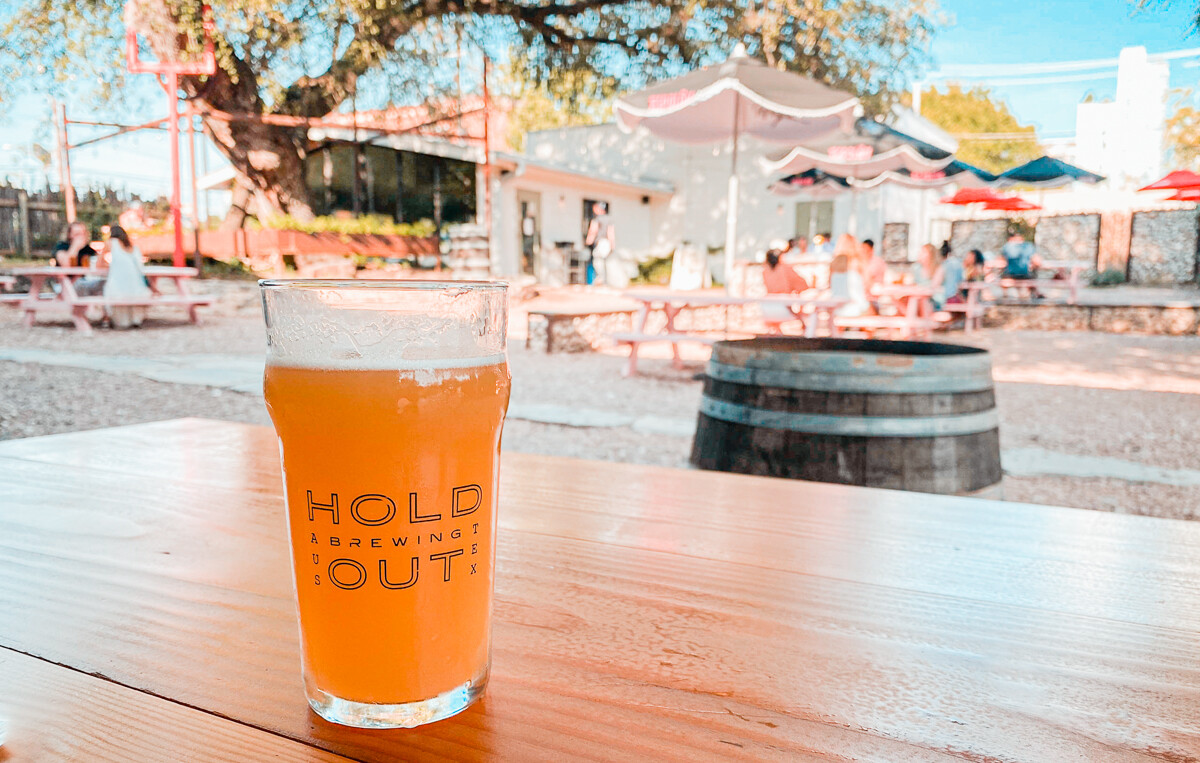 Brewpubs are never given the amount of credit they deserve.

I mean, it’s one thing to successfully open a restaurant with a delicious menu and kitchen staff that are kept busy. And it’s totally different brewing beers and creating a brand that cultivates diehard fans.

So to bring those two business goals together, under one roof, and to do it well is absolutely impressive.

Here in Austin, I consider us to be quite lucky for many reasons. One big reason is we have 12 phenomenal brewpubs, with that number only continuing to grow.

That’s not even mentioning the fact that the best brewpub in the country is right here in Austin, Texas!

For the purpose of this brewpub guide, let’s all get on the same page:

According to The Brewer’s Association, a Brewpub is defined as:

A brewpub is a hybrid between a restaurant and a brewery. It sells at least 25% of its beer on-site in combination with significant food services. At a brewpub, the beer is primarily brewed for sale inside the restaurant or bar. Where it’s legally allowed, brewpubs may sell beer to go or distribute it to some offsite destinations.

Now for my Austin brewpub guide, I’m keeping it easy and including Austin’s top brewpubs that are not only brewing beer but also making delicious food in a restaurant setting.

In Austin, Texas we’re blessed with over a dozen brewpubs pulling double-duty serving up magnificent dishes to pair with their delicious craft beers.

Below, you’re gonna find details on each one and their can’t miss brews and bites, Plus, everything else you should know about each unique brewpub!

Read This: 29 Dog-Friendly Bars and Restaurants in Austin

Read This: My Favorite Austin Breweries for Live Music

This place is always packed… That’s what happens when you brew delicious beer! In fact, The ABGB isn’t just one of Austin’s Best Brewpubs. It’s also been recognized for being a great brewpub on a national level!

The warehouse-style beer garden is a perfect community gathering place to bring your friends and family. Expect to fill up on good brews and eats with music from some of Austin’s favorite artists.

Batch Craft Beer and Kolaches is an Austin, family-owned and operated kolache bakery, taproom, and retail craft beer shop. The cofounders of Batch, brothers Josh and Noah Lit, turned a portion of their facility next door into a brewery where John Sydner can brew his beers.

This is one of my favorite places to work during the day and it’s a spot I recommend to everyone coming into town, even before they started brewing their own beer. They’ve recently added Taco Bronco food truck giving you even more reasons to love this mish-mash of a brewery/kolache bakery.

Just down the road from Jester King is one of Hill Country’s newest brewpubs: Beerburg Brewing.

Founded by Tervor Nearburg, former head brewer of Uncle Billy’s, his brewpub sits on 15-acres of gorgeous Hill Country land. His 10-barrel brewhouse takes the centerstage in the taproom, but the delicious food menu competes for a close second.

Bring your whole crew and the dogs out to this Hill Country brewpub! Out back, they have an off-leash dog park and a fenced in kid’s playground. It’s a little something for everyone at this oasis of a brewery.

Employee-owned brewery serving beers alongside food in a large industrial space with a pet-friendly patio.

Black Star Co-op prides itself on being the first cooperatively-owned and worker self-managed brewpub in the world. (A co-op, short for co-operative, is a business owned and run jointly by its members, who share the profits or benefits.)

Members of Black Star created their brewpub to be a democratic workplace, with livable wages for employees, while devoting themselves to using only the best local ingredients.

Homebrewers Chris and Whitney are brewing delicious lagers and serving up a menu of delightful eats in their North Austin location.

Homebrewers Chris Rauschuber and Whitney Roberts are the owners and brewers behind this North Austin brewpub. In the kitchen, they’re making small plates with fresh ingredients to serve alongside German-style beers.

These two have had plenty of practice brewing, so they’ve been able to open up to the public with a long list of knockouts. They brew plenty of German lagers, but they’re not scared to experiment with barrel-aging, hoppy IPAs, and fruity sours. It’s always a delight visiting this Austin brewpub!

Central Machine Works is East Austin’s newest brewery and their building will take your breath away. The massive 10,000 square foot building is from the 1940’s and was once an airplane part repair shop. The beer is made in full view of the dog-friendly beer hall.

But there is also an attached restaurant serving up classic pub fare. Currently (as of summer 2020), they are not putting out many beers, and they’re not consistently able to offer their brews on tap… So you might want to call and ask before you make the trip out.

Burgers, beers, and hip vibes are all around at downtown Austin’s newest brewery.

Hold Out Brewing did the impossible: they opened during a pandemic. And they’ve been wildly popular since! A couple of years ago the teams behind Wright Bros coffee and Better Half Bar decided to open a brewery. It was a long process but certainly worth the wait.

When it comes to the team behind the brews, they’ve assembled a crew with decades of brewery and service industry experience from local greats such as Real Ale Brewing, Jester King Brewery, Hops & Grain Brewing, and The Austin Beer Garden Brewing Company.

Their downtown Austin taproom is large and features a dreamy patio space centered around a historic (and hugomongues) Live Oak tree. There is also plenty of parking considering the location, which is always a nice plus.

Any visit to Jester King’s farmhouse brewery out in Texas Hill Country means a whole bunch of funky new sours to check out. Many of these beers are one-offs, with a few regulars, so it’s pretty exciting checking out the new releases.

With that in mind, some weekends are bottle release weekends which means long lines, like 2,500 people long. So make sure to check out the official brewery blog or Facebook page first!

This brewery is open weekends and definitely bring the dogs and family. Foodwise, this brewery has a delicious menu of pizza that features fresh ingredients, many sourced right from the farm.

I highly suggest going on the tours offered throughout the afternoon. Don’t worry about specific times, just keep an ear out for one of the workers to shout out a warning notice in a booming voice!

Cozy taproom with a long list of Belgian-inspired craft brews. Plus, espresso and tacos.

Ok, I don’t have favorites, but this Austin brewpub is a knockout from top to bottom. Lazarus Brewing Company is right in the middle of East Austin’s popular Sixth Street district; you’ll spot the brewery by its bright teal exterior.

For coffee lovers in Austin, you’ll love the cozy atmosphere and freshly roasted coffee. A perfect place overall to get some work done. For craft beer lovers though, this brewery will only leave you craving more.

The best part about Lazarus Brewing is they are constantly experimenting and brewing the most-underrepresented styles of beer. Meaning you’ll never get bored of their beer list.

Possibly one of the greatest views in all of Austin and the surrounding areas is the one enjoyed with a cold beer in hand at Oasis Texas Brewing Company sitting 400 feet over Lake Travis.

Their food menu is pretty small but many agree it’s some of the most delicious you’ll get at the Oasis docks.

What once was a side project for Adelbert’s Brewery has now become one of the most exciting new breweries in east Austin. Oddwood Ales is a small brewpub in east Austin near Mueller Park with a focus almost entirely on American style wild ales and saisons

The East Austin taproom was designed by OPA Design Studio with the goal of being your cozy neighborhood pub. There are vintage arcades machines, large wooden chairs around hefty tables, and a custom bar with eye-catching navy and yellow tiles.

Brewery known across the country for their incredible IPAs and, known to me, for having the best pizza in Austin.

Pinthouse Pizza is equally adored for their pizza as they are for their IPAs and barrel-aged beer. For foodies, good luck trying to decide on just one of Pinthouse’s pizzas!

I highly suggest getting pizza rolls regardless, you can thank me later. Right now there are two locations (South Lamar and Burnet) but a third location is opening soon in Round Rock.

What’s your favorite brewpub? Do you go there for the food or brews? Disagree with my ranking? Let me know why in the comments! Cheers!