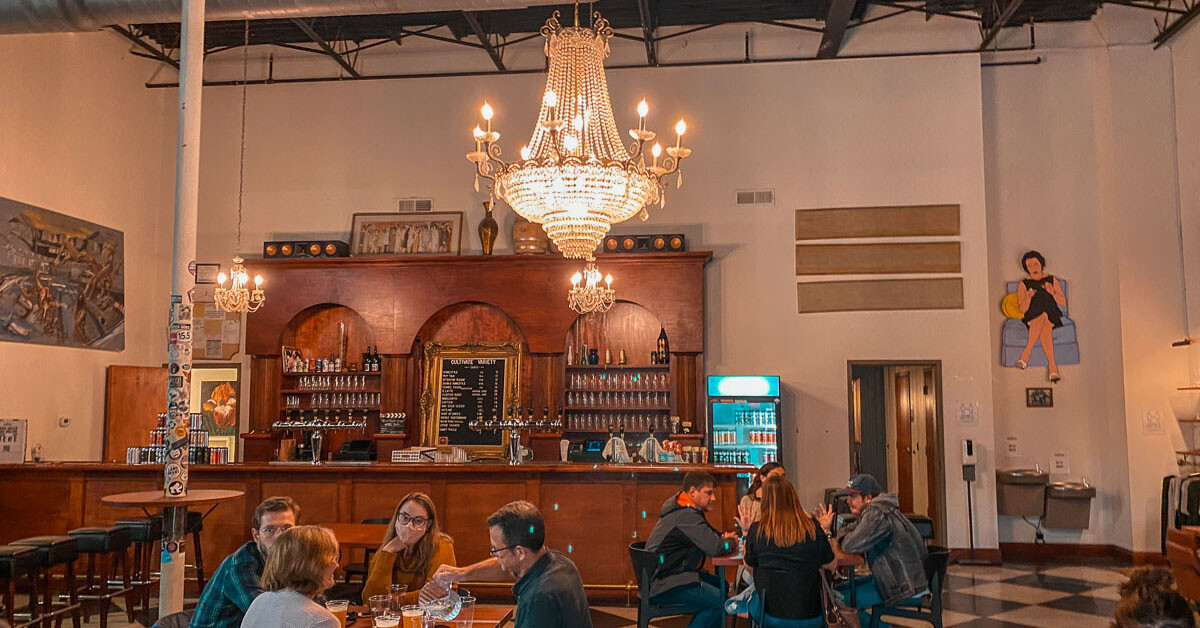 Nashville is the heart of the country music scene, but isn’t just a travel spot for music-lovers. Also known as Music City, Nashville has a young craft beer scene that has blown up in the past few years. So now beer lovers are able to get something local to drink while they enjoy live music.

From the best breweries in Nashville, and even the best beer bars and most popular local brews, here is your guide to Nashville’s craft beer scene.

Read This: A Travel Guide to the Best Nashville Neighborhoods

Bearded Iris was founded in 2016 and since then they’ve become quite loved with Nashville craft beer drinkers. They are mostly known for their range of IPAs, DIPAs, and pale ales.

The taproom is roughly 1,500 square feet and features antique furniture, chandeliers, and a bar partially covered in embossed velvet fabric. Part industrial taproom, part speakeasy, this is one Nashville brewery you do not want to skip!

If you love Belgium beers you need to visit Black Abbey Brewing in Nashville. This Nashville brewery has a “monastery-inspired setup”. Not sure what that means, BUT I do know that they are quite popular. And they’re good at what they brew! ‘Nuff said.

Established in 1994, Black Stone is Nashville’s oldest and most award winning brewery. I’ve yet to visit them in person, but they’re high on my list for my next trip. This is a brewery that has been recommended heavily to me, and for good reason. I mean how impressive is it that they’ve been around since the early 90’s?!

When it comes to their beer and taproom, well since 1994 they’ve been able to upgrade to a state-of-the-art brewing system. This system allows them to crank out incredible beers that win awards on local, national, and international levels.

East Nashville Beer Works is a community and taproom centered brewery. Come visit Nashville’s most family and dog friendly brewery and one of the top rated patios in town.

Established in 2012, Fat Bottom Brewing is an industrial-chic taproom known for their specialty ales & seasonal brews. The brewery itself is a massive 33,000 square foot facility with state-of-the-art equipment, Their beers are served alongside juicy burgers and other great comfort food dishes.

The taproom itself is large and hosts plenty of community events. There is an endless amount of dog-friendly patio space and even a biergarden surrounded with great landscaping.

Industrial-style beer pub offering its own brand of microbrews, plus cheese curds & event nights. With two locations, Jackalope Brewing is one of Nashville’s top breweries.

The Den is the original Jackalope taproom and is now its production facility. The Ranch is Jackalope’s second location (and my personal favorite). The Ranch is bright, colorful, and home to more of Jackalope’s amazing beers!

Living Waters is one of the newest breweries to open in East Nashville. This brewery focuses heavily on unique and small batch beers, they even have an impressive coffee program. Their name comes from “the ever changing nature of flowing water, yeast, and the constant pursuit of perfection.”

This Nashville brewery gives off some heavy hip vibes. I love the mid-century modern styled taproom. It feels like the type of brewery Don Draper would spend time in! When it comes to the beers, this brewery in Nashville focuses on New England IPAs and dark and roasty stouts.

Founder and head brewer Jeff Fountain started his brewing experience as a volunteer at San Diego’s Mission Brewery. There he honed his craft and developed his own style. In 2014, with years of brewing experience under his belt he move to Nashville to start New Heights as a salute to “starting new beginnings”.

Southern Grist is a neighborhood brewery operating in two locations in Nashville: East Nashville and the Nations. Their spot in East Nashville (pictured above) is very small but still home to a long list of their much-loved beers.

At both locations, this Nashville brewery specializes in creating unique creations and variants on styles that we all know and love. They’re also one of the top breweries in Nashville! Seriously, everyone recommended me a visit here and I’m so glad I finally got to visit in person on my last trip.

Established in 2014, TailGate Brewery in Nashville has seen tremendous growth over the past few years. Starting with a 3-barrel system, they’ve grown to a 50-barrel system and three local taprooms. TailGate offers monumental options when it comes to beer– the brewery usually features 30 of their own brews on tap!

All three locations offer their own beers and seltzers, wine, liquor, and absolutely divine pizzas, sandwiches and salads. Their headquarters in West Nashville is filled to the brim with artwork from their in-house artist. And with plenty of room to spread out, you’ll be able to enjoy local brews and take in the beauty of Nashville’s mountains.

Yazoo Brewing started in 2004 in the old Marathon Motor Works building, but has since relocated to a bigger facility just outside of Nashville in Madison.

Today, you’ll find their Dos Perros Mexican Brown Ale all around Nashville. Personally, I’ve never been to their actual taproom (I’ve just drank a lot of their Dos Perros), but next visit to Nashville, best believe I’ll pay them a visit in person.

So maybe you can’t make it to Nashville, or you only have a short time in the Music City… Well, no worries, here are the top 5 local beers in Nashville not to be missed:

Now it’s your turn! Time to start planning your beercation to Nashville, Texas!

Use these images below to say this Nashville Craft Beer Guide to your Pinterest.