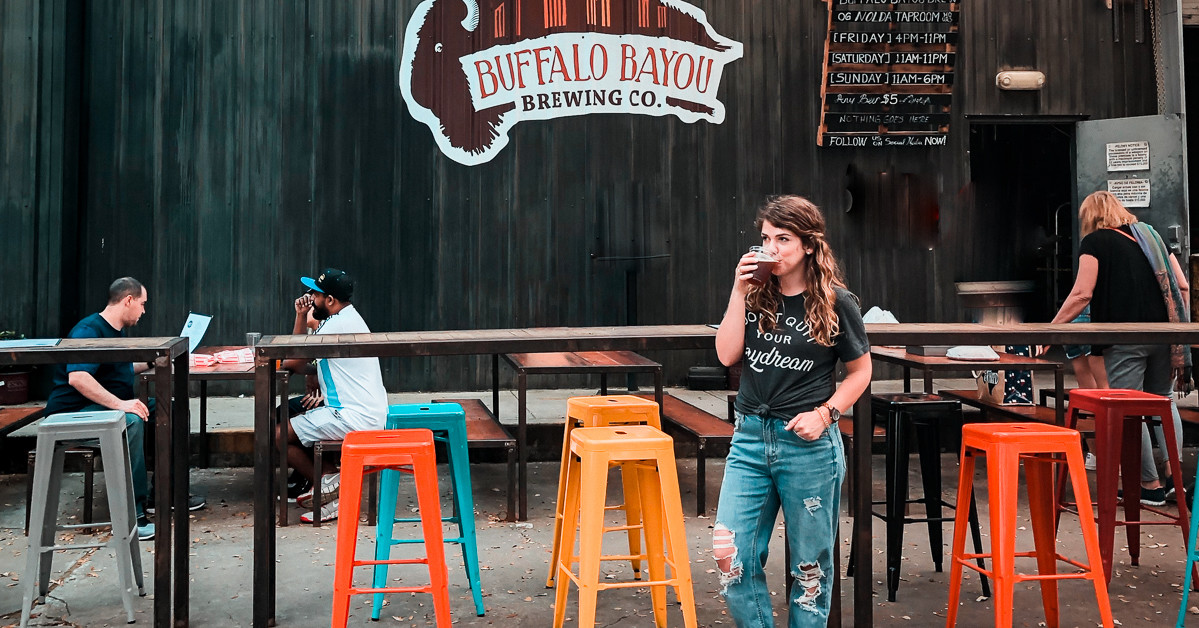 Best Texas Craft Beers Recap of my 2019 Texas Brewery Roadtrip where I visited 51 breweries in 9 days. More information about the trip HERE.

The fourth beer in their Plumbus series, this is a big, bold double New England IPA with Citra, Mosaic, and Vic Secret hops. Then it was double dry hopped for even bigger, juicier citrus flavors than the regular Dinglebop.

We had six different types of Daisy Chain beers during our time in the Houston area (somehow I didn’t get a good photo of anything of them! What are Daisy Chain beers? Well, after Hurricane Harvey, Southern Star Brewing Company in Conroe wanted to do something to bring the beer community together.

So they decided to share their yeast with neighboring Copperhead Brewing so they could make a beer. Then Copperhead would pass on the yeast to the next brewery and so on. This year’s collaboration featured 25 breweries creating beers of all sorts featuring Southern Star’s original yeast strain. Such a cool idea, I’d love to see in other cities! Below are the Daisy Chains we had:

American IPA aged in wet gin barrels from Treaty Oak Bright notes of peach, citrus, and tropical fruit combine with aromas of juniper and rosemary lead to a rich, complex presence on the palate.

Golden Sour fermented in 2nd use whiskey barrels then aged on local Dove Cantaloupes w/ a touch of salt.

This classic cream ale features flaked maize used alongside malted barley to give in a slight corny sweetness in this everyday beer. If I lived in Houston, I’d be drinking on this one often.

There’s no photo evidence, but believe me. We got to try a little preview of the yet-to-be-released Belgium Quad which had been aged in bottles for nine months. It was divine

This Earl Grey and Lavender IPA was a taproom exclusive. I feel blessed to have been able to sample it on the roadtrip.

A strong 11% ABV Belgian quad brewed with Turkish figs. Those figs give it a rich earthiness to compliment the malt’s fruit and raisin flavors. Plus, that Belgian yeast was just awesome.

Agave nectar is added in the kettle to create a distinctive sweetness that is accentuated by lime in this crisp refreshing golden ale. We had a lot of good beers that day, this one is one of the few I remember very well

Watch out Live Oak, there’s a new Hefe in town… That’s all I got to say about that.

When I think of hazy IPAs, I think of beers that look like this, juicy AF. Not a huge fanatic over the style, that is until I tasted Tron Gun from Sigma Brewing. Luckily there was a four-pack left for me to take some haze home to Austin!

A golden stout brewed with an abundance of oats, honey malt, and lactose milk sugar. This beer weighs in at 8.5% ABV and is finished with almond extract and whole coffee beans creating a “cold brew”. Intense coffee and almond aromas, with nearly peanut taste and coffee finish. One of my top three beers of the trip.

We started out our roadtrip on a high note with this incredible Cherry Tripel in College Station at our second brewery. It stuck with us for the rest of the trip. I think there were a few times Steve and I agreed that we wish we had had more.

This one makes me angry, only because I’m not able to get out here in Austin. The aroma of Mermaids & Unicorns is malty and bready and hints of peach and orange from the late addition of Cascade and Jarrylo hops. Just delicious.

Oak-aged Brett Pilsner w/ fresh cucumber, lime, and sea salt, another one of the top three beers of the trip. This would be the beer to enjoy on a hot summer day. If you’re a fan of pickles, you’d love this limited release from Lakewood.

So yep, out of the 250+ beers we had on our Texas Brewery Road Trip, these were the top 18 that I remember best. It was a blur, and we had so much great craft beer, so nothing to take personally if I missed anyone!

With that being said, how many of these Texas craft beers have you tried?

The Rodeo’s in Town! Guide to Rodeo Austin 2019