Home » Travel Guides » Asia » Everything to Do, Eat, and See in Chiang Mai, Thailand

Everything to Do, Eat, and See in Chiang Mai, Thailand 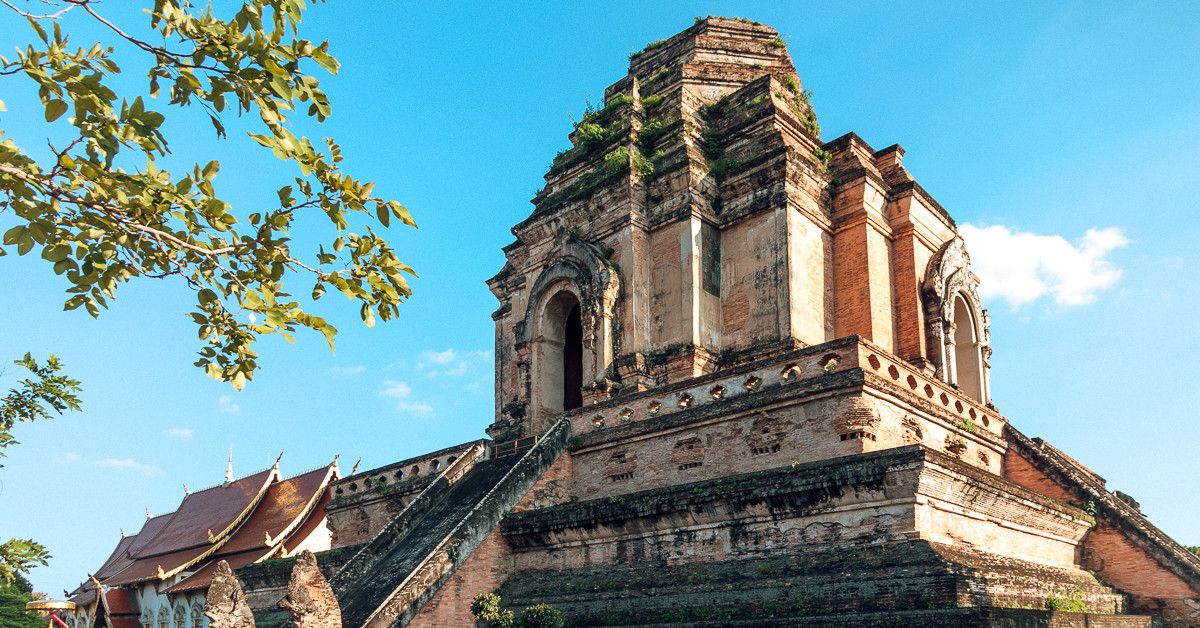 When I came back from my first trip to Asia, so many people were asking me where was the best place I visited? And without hesitation I always replied, “Chiang Mai.”

Though Singapore was a close second…

The coolest thing I did in Asia was spending an afternoon up-close and personal with three Asian elephants, and that happened in the mountains of Chiang Mai.

There’s something magical about Chiang Mai. Maybe it’s the people, the hundreds of coffee shops, or the lush greenery. Whatever it is, it sure is special.

I knew it would be something incredible before I arrived. Especially considering that my boss and a few of my co-workers used to live there full-time back in their digital nomad days. I was lucky enough to score some recommendations and tips for Chiang Mai which proved to make the four days we spent there even more special.

It was hard leaving Chiang Mai. I could have, and wanted to, stay there for many more weeks. There was so much I didn’t get to eat and see, plus the laid back vibes of the Old City was exactly what my soul needed.

Writing this guide brought back so many fun memories, while also making me very hungry.

Chiang Mai is a great city to visit and has plenty of things to do for every type of traveler. For all you coffee lovers, digital nomads, foodies, and yogis out there, Chiang Mai is the city for you.

Writing this guide brought back so many fun memories, while also making me very hungry.

So, whether you’re planning to visit Chiang Mai, or it’s top on your travel bucket list, here’s my travel guide filled with travel tips, recommendations, and need-to-knows.

It’s cheap! The cheapest place we visited in Asia, it was shocking.

Culture! There is so much culture and history in Chiang Mai, it’s inspiring.

Food! The food, oh my god, the food. It was the best and I couldn’t stop eating it. The only thing I regret was not trying more dishes and eating more Khao Soi

It was fun! There was so much to do in Chiang Mai, the people were nice, the air was clean, and the whole area felt very safe.

Language: Thai is the official language of Thailand, but many people in Chiang Mai speak and understand English. Download the Google Translate app for assistance with conversations and phrases.

Entry & Visas: Thailand does not require a visa for stays of up to 90 days for visitors with an American passport.

Safety: Chiang Mai is safe and the common Thai scams aren’t much of a problem here.

Visiting Wats: The temples (wats) in Chiang Mai are sacred in Buddhist cultures so make sure you act and dress respectfully. Don’t be loud or inappropriate, bow your head when entering the buildings and to the statues, and make sure you’re covered from your knees to your bottoms. When in doubt, take a cue from the locals and act accordingly.

Big World Travel Tip: I’m a big fan of this light, but large scarf. ($12 on Amazon!) It’s good quality but cheap, and easy to fit into your day pack. For a full list of my favorite travel gear, check this blog out.

Chiang Mai has a cooler and more mild climate compared to southern Thailand. It’s comfortable for those who aren’t a fan of the humid, tropical heat. Be prepared for tropical storms or the occasional rain shower.

The best time to visit Chiang Mai is during the cool months between November and February. The Days are still hot but temperatures drop in the mornings and evenings.

Getting to Chiang Mai

Flying into Chiang Mai through Thailand or other parts of Asia is relatively easy and cheap. We went through AirAsia for a quick flight from Phuket.

If you want more of an adventure, you can take the overnight train to Chiang Mai. I would recommend leaving Bangkok some time during the day so you can see the beautiful Thai countryside. Check out the train prices from Bangkok to Chiang Mai here.

Where to Stay in Chiang Mai

The Old Town (above are its city walls) is the most visited part of Chiang Mai and is highly walkable. There’s everything from hip, low-budget hostels to upscale boutique hotels. If you prefer staying further away from the touristy attractions in Chiang Mai, you have a few other options…

Nimmanhaemin, or Nimman for short is one of the fastest growing neighborhoods in Chiang Mai. It hosts plenty of digital nomads, Thai university students, as well as Tourists. Full of cafes and hip eateries, Nimman Road is perfect for the foodie or long-term traveler.

Wherever you stay, the two areas above are both great neighborhoods to spend a day exploring and eating your way through!

Getting Around Chiang Mai

You have three options for getting around Chiang Mai, Thailand, you could order a Grab taxi through your app.

But the best way to go is to wave down a TukTuk (below) for a fun and cheap way around the city. Make sure to ask about price before getting in.

However, the cheapest way to get around are the open-backed red buses known as Songthaew. When you flag one down tell the driver where you want to go, or the nearest landmark, and they might say no if they are heading in another direction. They’re very common so you won’t have too much of a problem finding one going where you’re going.

What to Do in Chiang Mai

Chat with a Monk

There are five temples in Chiang Mai with “Monk Chat” programs where you can have the chance to talk with monks about anything as you help them practice their English. Be sure to wear appropriate clothing that covers your shoulders and everything above the knees.

This was my favorite of all the temples in Chiang Mai. More than 600 years old, this temple (below) housed the famous Emerald Buddha until 1475. There is a small fee to enter the compound, but it’s worth your money. Additionally, this is a temple where you have a chance to talk with monks.

One of the most beautiful temples in Chiang Mai is a short 30-45 minute drive up the mountains. Take a red truck from anywhere in the city and ask if they’re heading to Doi Suthep, the cost should be roughly 60 Baht per person.

This market (pictured below) is open every night with vendors lined up and down Chang Klan Road selling everything you could imagine.

We went to Thaphae Boxing Stadium and had a great time. The boxing ring was surrounded by stalls for snacks and cold Singah beers.

Play with Elephants the Responsible Way

It was such an honor to play, hike, and feed these gentle giants while in Chiang Mai. Many elephants in Thailand, and around the world, are exploited and tortured for human enjoyment.

Please, if you come to Thailand, choose an ethical tour, one that is no riding, and do avoid circuses or those ‘zoos’ where tigers are drugged up so you can ‘cuddle’ with them. Ugh what is wrong with people…

Anyways, I highly recommend Elephant Nature Park or one of their off-site projects like Elephant Paradise, which is where we went. These elephants were once riding and logging elephants, and before that they were tortured and broken into submission by a method referred to as crushing. the name alone can give you an idea of how horrifying it is.

It’s heartbreaking to think there are people out there who would do this to these intelligent creatures, but it’s even more disturbing to think of all the tourists who pay good money to ride on their backs for twenty minutes, just to get a nice Facebook picture.

Please, don’t support that industry, or any place that uses animals for entertainment without doing proper research first. The Thai government won’t ban riding elephants because of the tourism money it generates… here’s hoping they’ll come around to what is right!

Big World Travel Tip: Book your elephant tour online a few days in advance. Head over here for a link to different options and pricing.

Where to Eat and Drink in Chiang Mai

I ate SO MUCH delicious food in Chiang Mai. That’s probably why I fell in love with the area so much. Expect plenty of fried and or spicy eats typical of traditional northern Thai cuisine.

And the best part was, it was all so cheap! I’m talking bowls of pad thai for a few bucks, or dinner for two out at an upscale restaurant for less than $30.

So when it comes to eating, don’t miss out on these life-changing northern Thai food:

Ristr8to Lab (above) for international award-winning latte art (order the Satan Latte), the whole menu is unique easily making it a must stop for coffee lovers/snobs.

Eat Me for plenty of delicious traditional Thai dishes.

Beer Lab for a nice list of domestic and international craft beer.

Cherng Doi Roast Chicken (above) for the most delicious meal of your life.

Rise Rooftop Bar for fancy cocktails and a rooftop view of Chiang Mai.

Fern Forest Cafe (above) for a quiet and serene place to grab coffee and pastries.

Dash is a popular restaurant that is one you cannot miss when visiting, make reservations the day of.

Graph Cafe is another one of Chiang Mai’s popular cafes, great for working or reading.

Ginger & Kafe for a high-end, top notch dinner that will be a party for your taste buds. One of my favorite places I ate in Chiang Mai.

The Riverside Bar & Restaurant (above) for a nice dinner on the Mae Ping River, or get a ticket on their dinner boat cruise!

The Grumpy Old Men: My Beer Friend Taproom for Thai craft beer in a cozy taproom.

Found this guide helpful? Pin these to Pinterest to save for later!

The Best Things to Do at the Marina...

7 Unforgettable Things Every Type of Traveler Should...