7 Essential Dallas Breweries Not to Be Missed

I’ve been living in Texas for nearly two years and this November was my first time visiting Dallas. It was long overdue but I knew there would be great Dallas breweries, sights, and adventures waiting for me.

We have family in Grapevine, Texas, which is right in-between Dallas and Fort Worth. On our last visit, we did a fabulous job hitting up the breweries in Fort Worth and surrounding towns. But this time, I made it obvious that we should spend as much of the weekend as we could exploring Dallas. Luckily, everyone else was on-board!

Read This: 17 of the Most Unique Airbnb Rentals in Texas to Fuel Your Wanderlust

We had very detailed recommendations on where to eat, drink, and play in Dallas from our good friend Robert, over at Brewing Matters. Which more or less meant, we were given a road map to navigating the best spot for craft beer in Dallas. How did we get so blessed?

Most of the breweries in Dallas have only been making beer for a few years, but they’ve already put out plenty of phenomenal brews. And now people across the country are beginning to notice. This guide is not yet, the most comprehensive guide to Dallas breweries but it does include some of the most essential taprooms, and even a cidery! 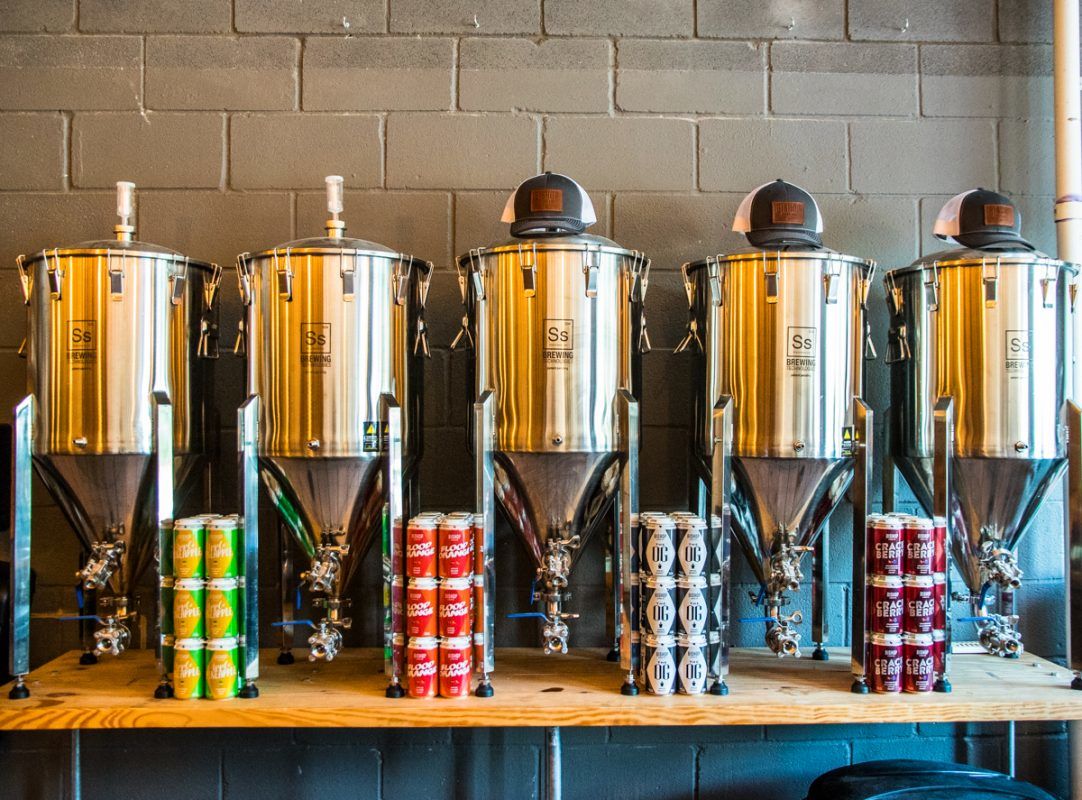 Ok, I know you came here for Dallas craft beer and I’m starting off talking about cider. But when it’s still kinda of early in the day, cider is a great place to start.

Bishop Cider is tucked away into a small tasting room in the Bishop Arts District. You could probably spend a fun few hours just in this neighborhood, bouncing around from shop to shop and exploring the hip bars. I mainly came for the cider though.

I’ve always been a fan of Bishop Cider, they’re great at the classics and playing around with fruit. We ended up getting a few flights, making sure to try everything, but the crowd favorite was easily the Apple Pineapple. 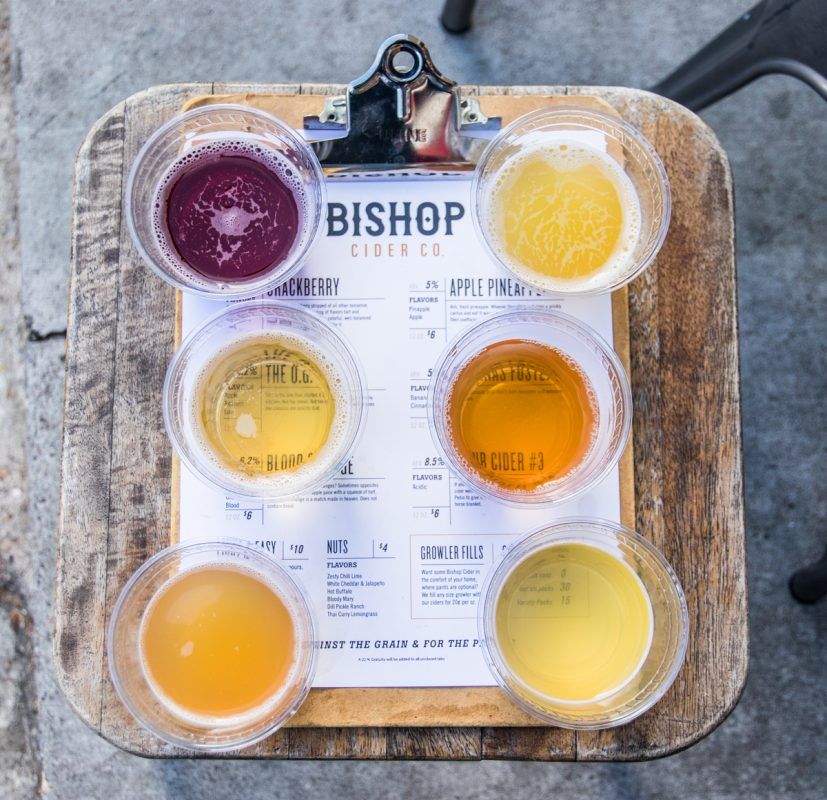 It tasted so incredible and fresh, unlike another popular pineapple cider I see people drink far too often. The two I loved were the aptly named Crackberry, a tart collision of cranberry and blackberry, and the Bananas Foster, which tasted like real bananas, not that fake flavor!

The taproom is quite small, but we had no problem sitting outside on the stoop with our dog, using a chair as our table. Bishop Cider really delivered though on their generously sized flights. There are also growlers available and cider to-go as well. 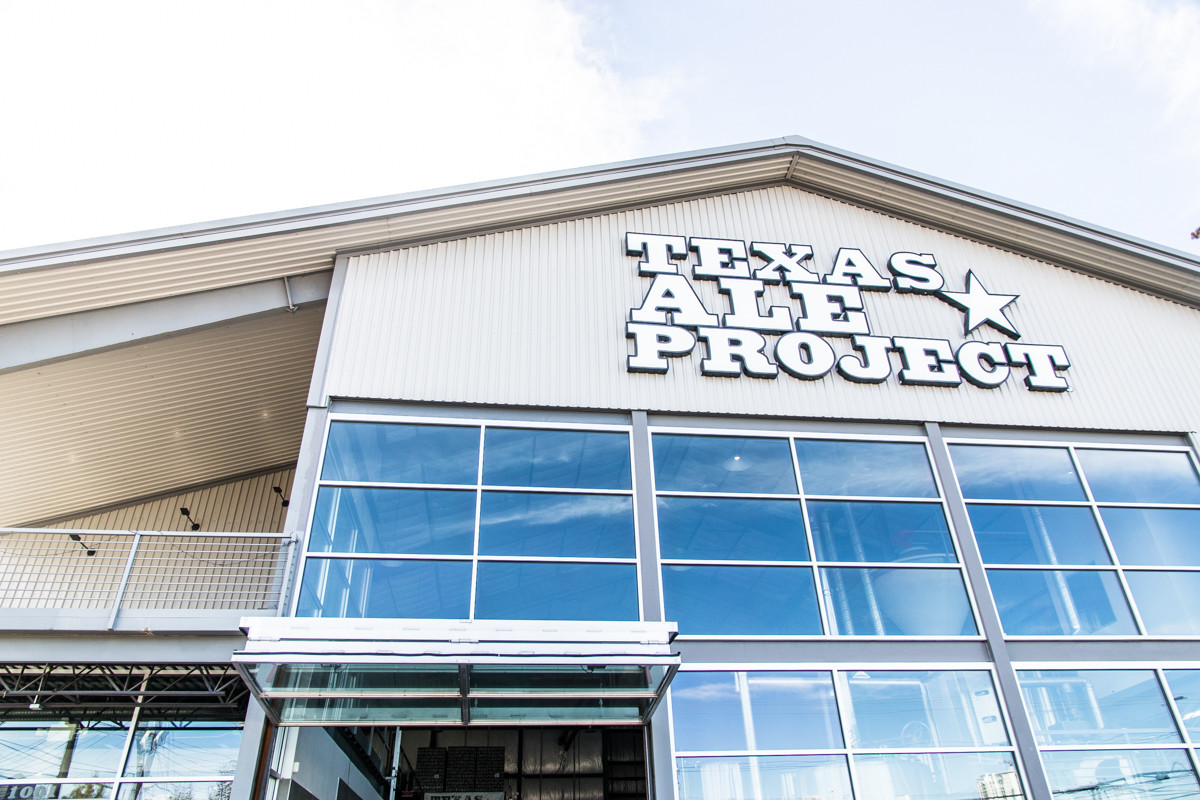 After Bishop Cider we headed over to the nearby Design District which is packed full of impressive Dallas breweries.

First up was Texas Ale Project, which was recommended for it’s gorgeous views of the Dallas Skyline. This was a really great brewery for our group of fellow beer travelers. Texas Ale Project had tons of games and cornhole boards, along with plenty of seating, in and out, to see the nearby skyline. The brewery is dog-friendly outside, and be warned, the beer servers will befriend your dog by giving them plenty of treats. ;) 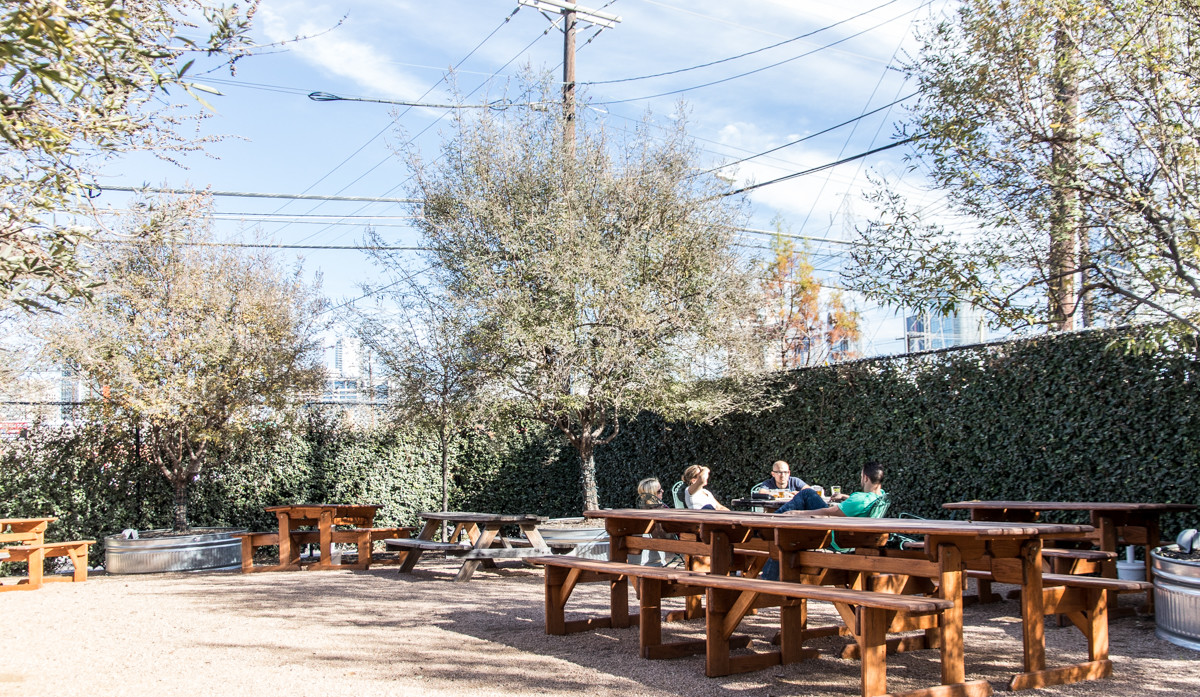 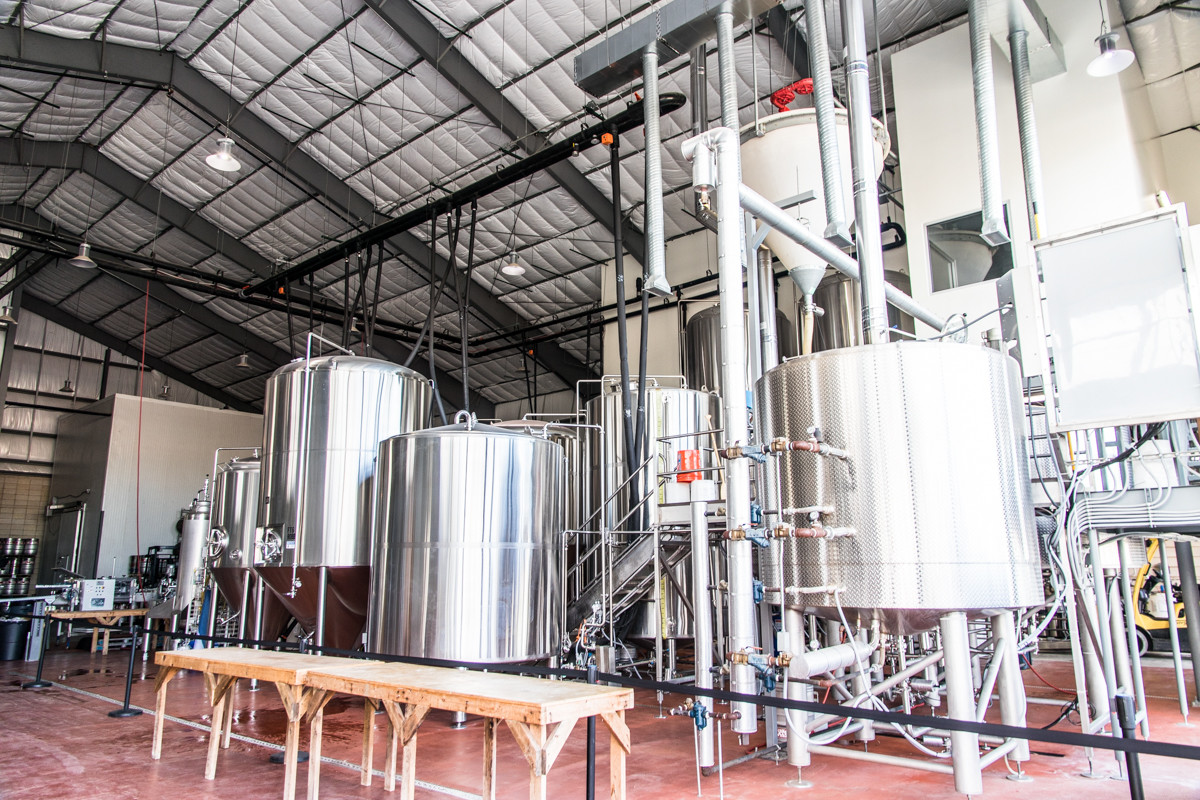 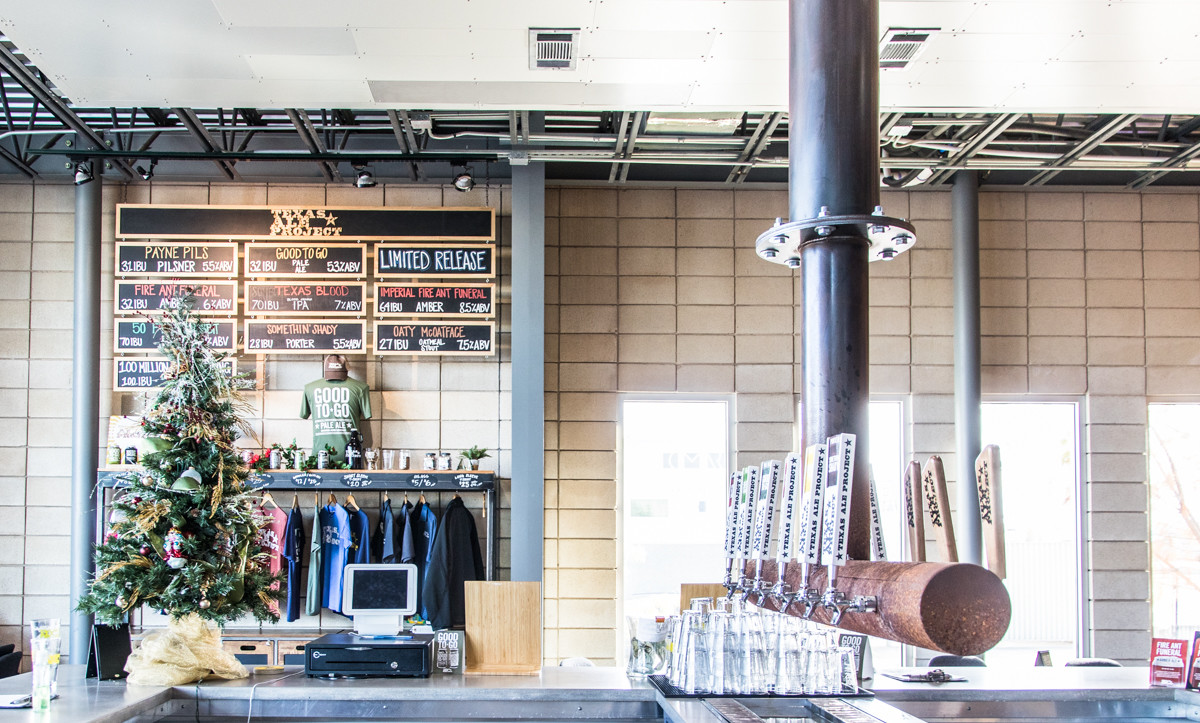 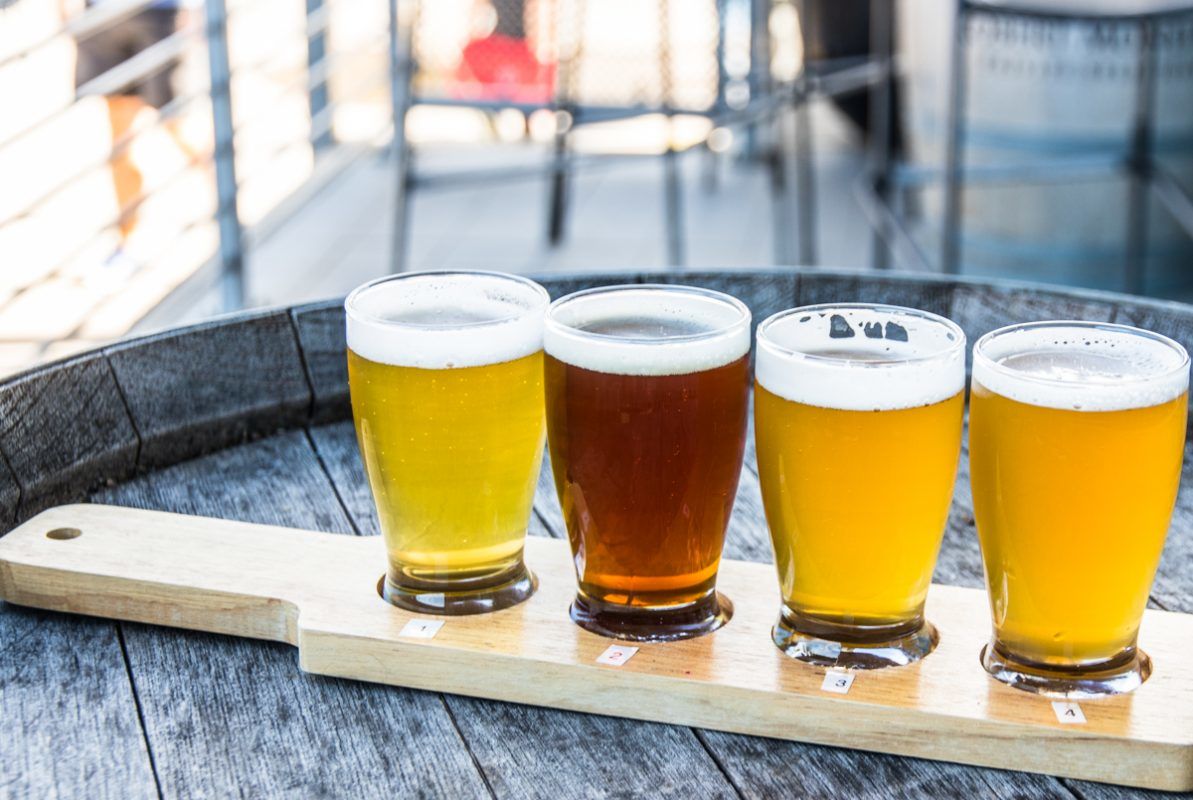 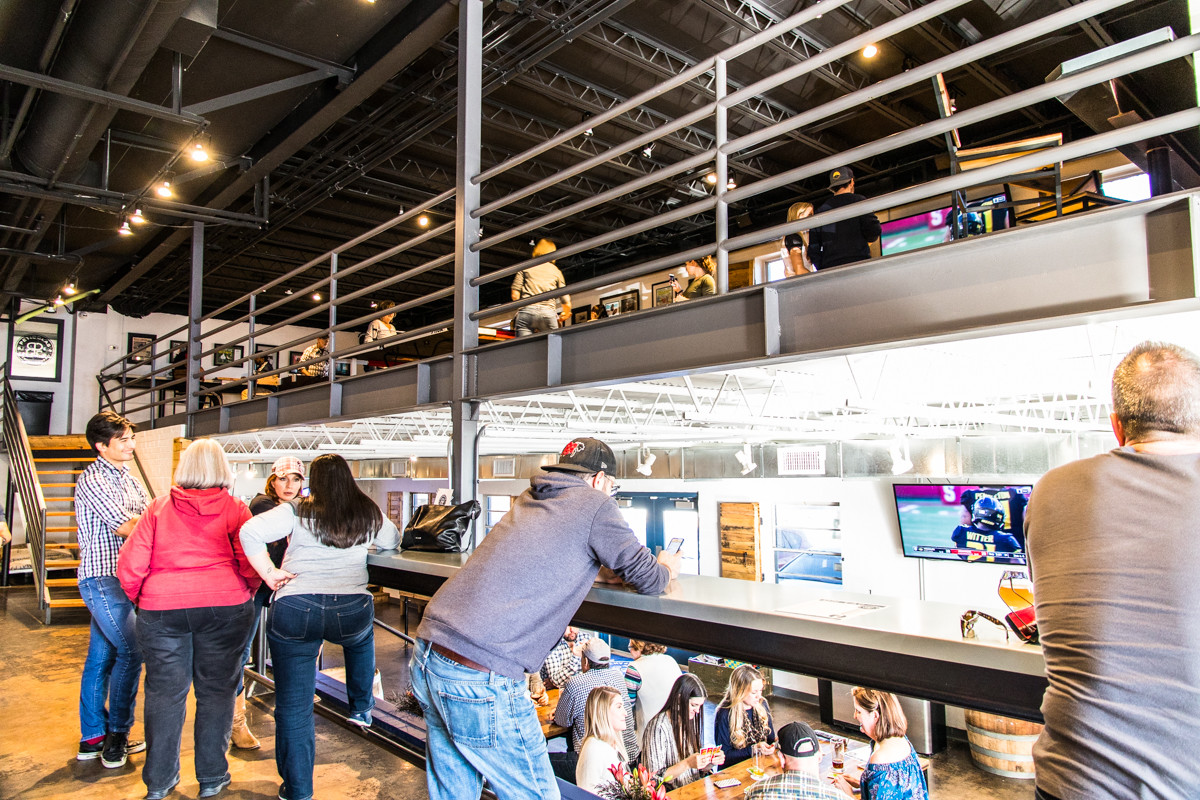 Peticolas Brewing was one of the Dallas breweries I was most looking forward to visiting. Many in Dallas consider this brewery to be one of the city’s best, so of course I couldn’t skip these guys over.

The Peticolas taproom is such a unique one, and it naturally creates a fun, friendly atmosphere. With three split levels, there’s a good bit of room to come here and hang out with a group. While the place is not dog-friendly, it does offer ping pong tables and other arcade games on the upstairs level.

If you do come here in a party of three or more, you must go for their monster flight, which features all 17 beers the brewery has on tap. Just FYI, I asked, and yes, they always keep 17 beers on tap for this flight. Now that’s a new level of dedication!

No worries, if you’re not feeling the monster flight though. They have smaller flights and pints of 17 different beers on tap. However, if it’s your first time here, you must try their mega-popular and life-changing, Velvet Hammer, an award-winning Imperial Red Ale that was also the owner’s very first brew. 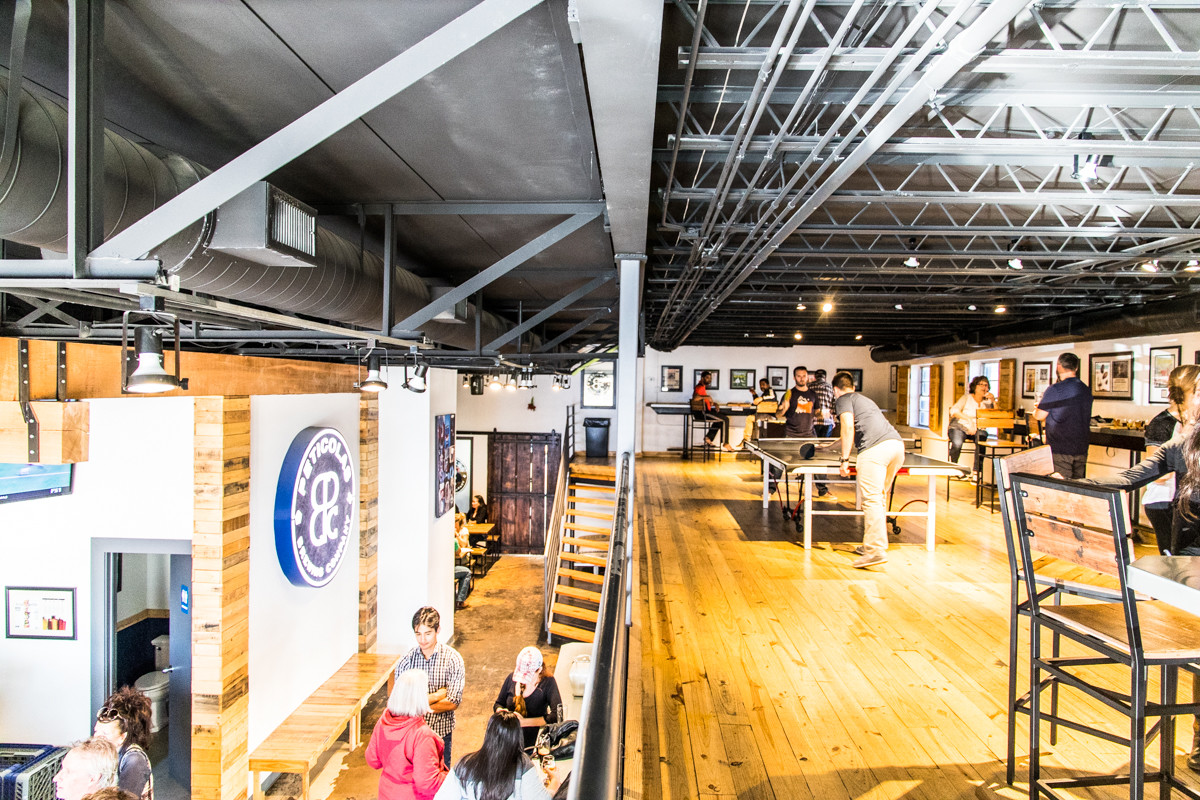 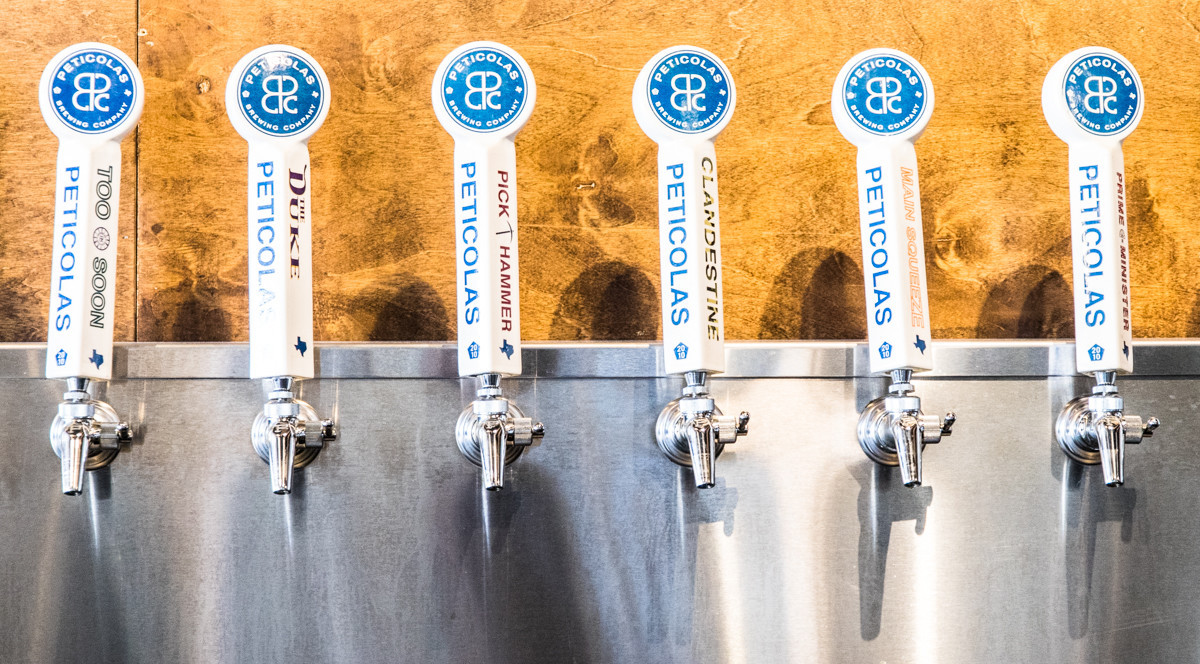 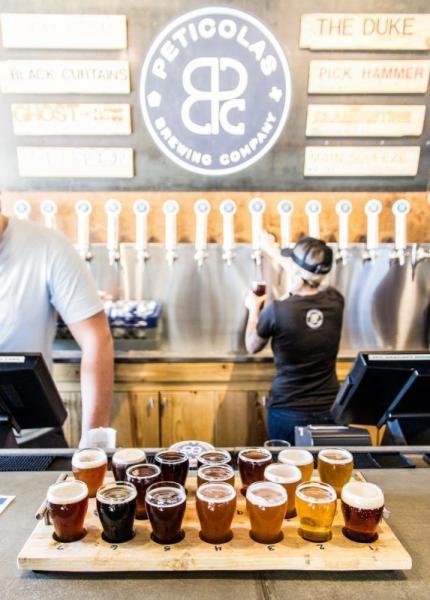 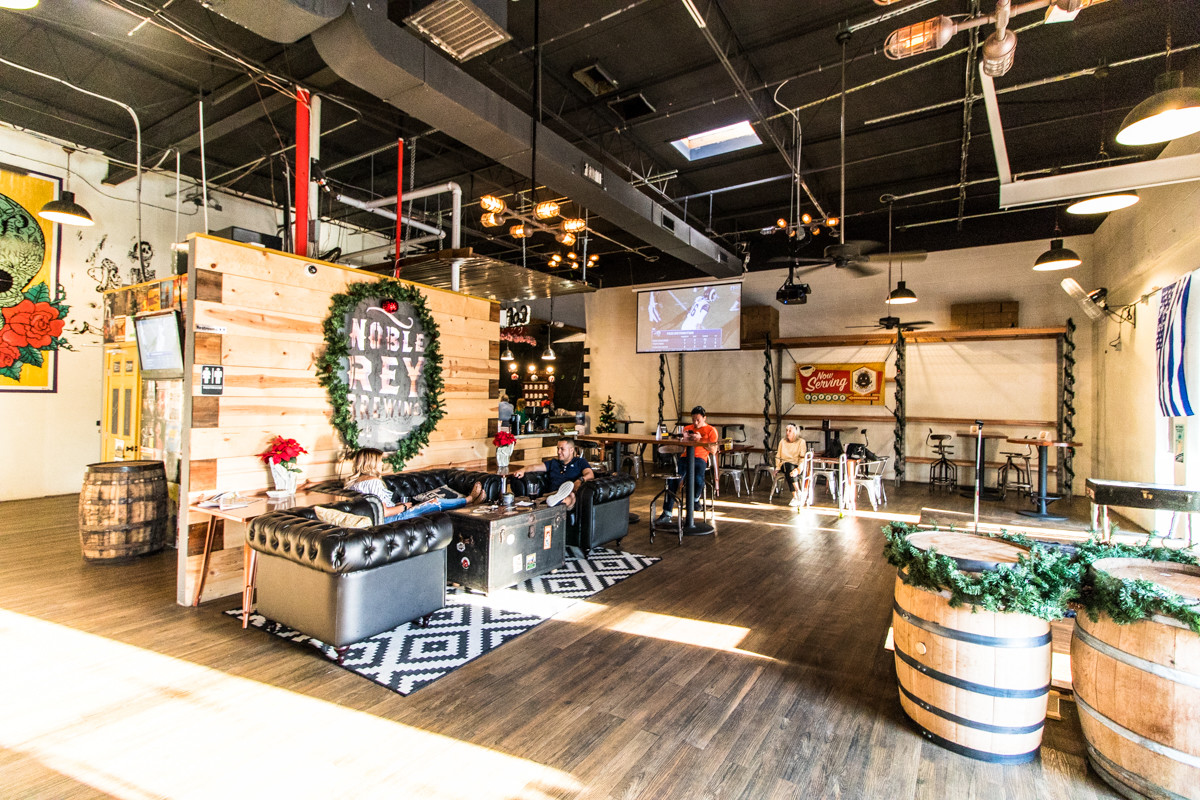 Noble Rey Brewing has two locations around town and we were lucky enough to visit both. Their original taproom is located in Dallas’s Design District, blocks away from other breweries such Peticolas and Texas Ale Project. The vibe here is laid-back and very cozy. I would just love to spend evenings at this brewery, working on a laptop and drinking craft beer (they also serve other local drinks, including coffee!) .

I think between visiting both locations, we ended up trying all that they had available, which was a solid range of styles! The Barampus though… it’s a current seasonal of theirs that was one of the more interesting beers I’ve tried. This dark beast was a 6.1% ABV spiced brown ale, with an incredible taste of peanut butter and holiday spices of nutmeg and allspice. I definitely enjoyed having a taster of it, but I don’t know if I could handle settling down with a full pint. We took a few crowlers home too, one of Eagle Tears gose, and Off the Leash red ale, another favorite of ours.

A visit to Noble Rey at the Dallas Farmers Market is a great experience in itself. Especially if you’re looking to indulge in some local goodies. The 26,000 square foot market is open daily, though note that Noble Rey location is open Wednesday through Sunday. 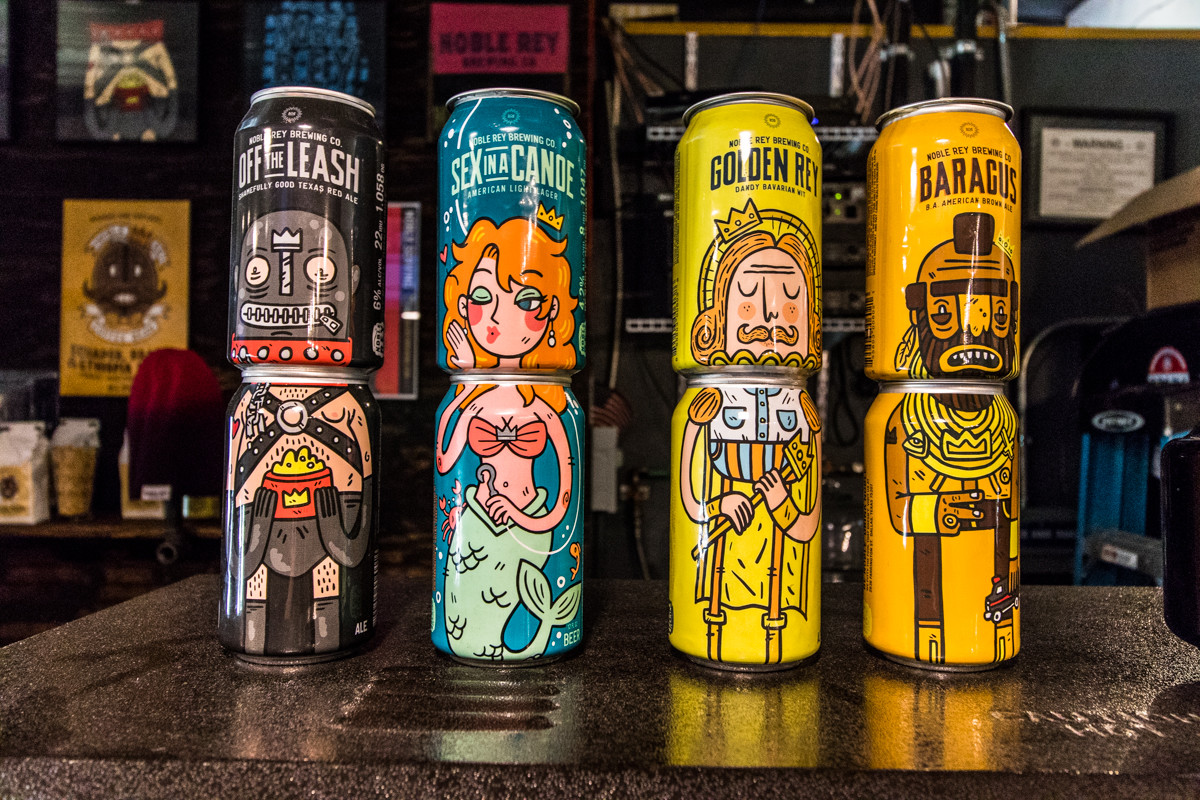 How great are these cans? Every beer has a character done in this style. Really adds a fun touch to describing their beers. 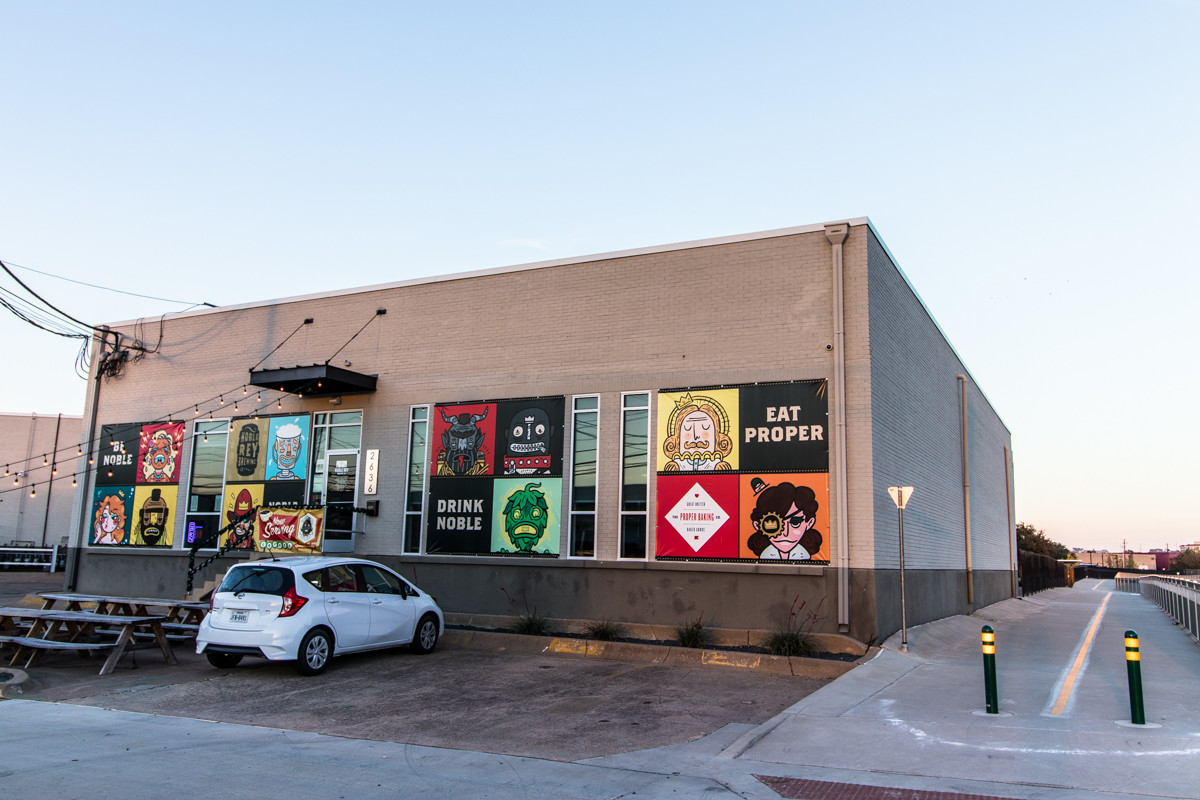 Noble Rey Brewing’s taproom is just blocks away from some of the other great Dallas breweries such as Peticolas and Pegasus City.

Inside the massive Dallas Farmers Market. You could easily spend a few hours here, just shopping and eating all the best local goods. 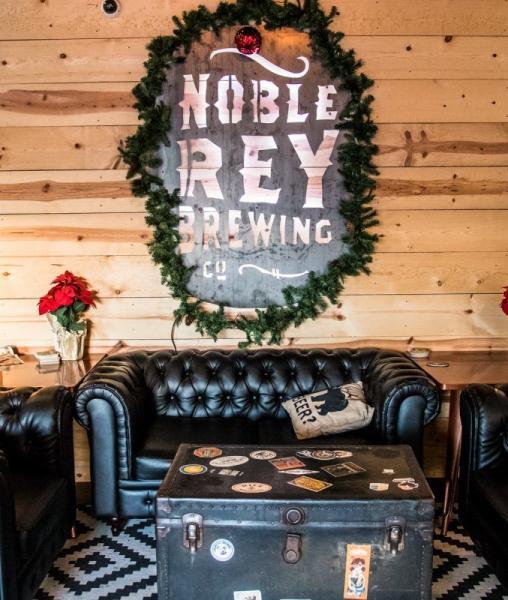 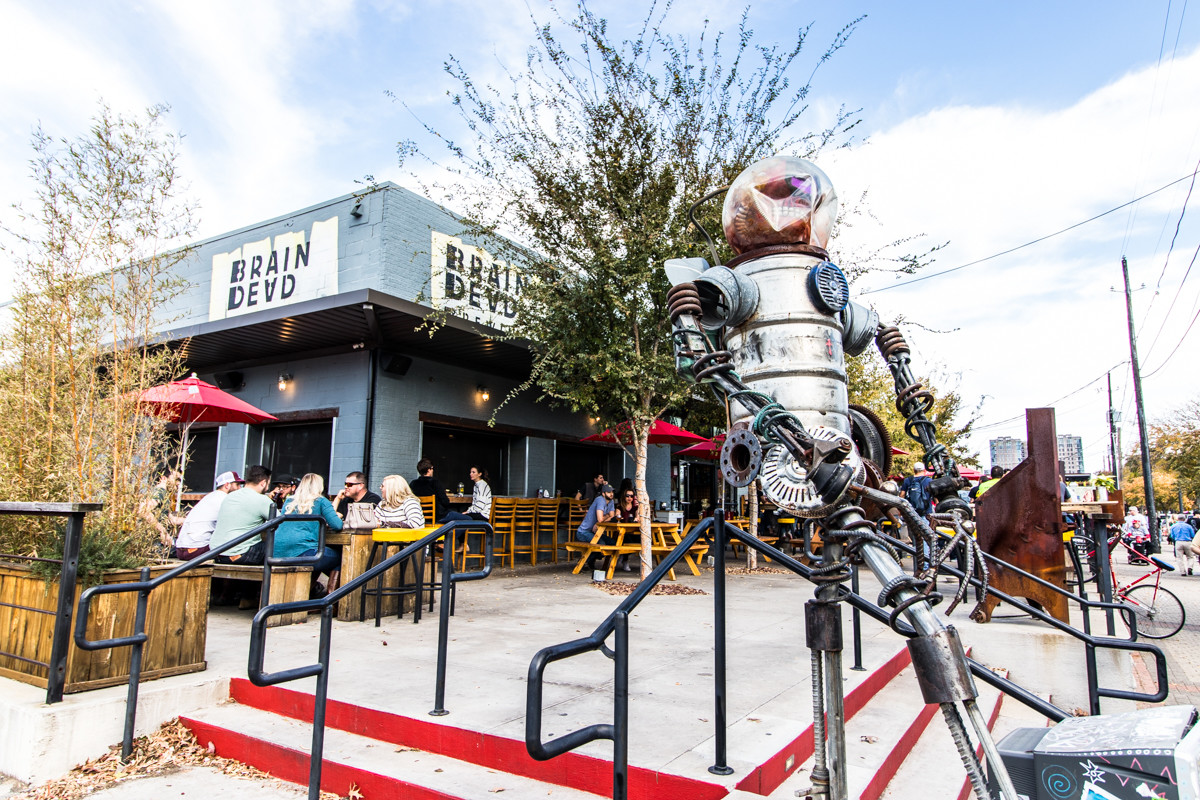 One of our favorite breweries during our first trip to Dallas was Braindead Brewing, a brewpub located right in the heart of colorful Deep Ellum neighborhood. The brewery is owned by Sam Wynne, son of the Wynne family that owns Flying Saucer restaurants and he’s also a Certified Cicerone. Plus, the head brewer here, is the original head brewer from Deep Ellum Brewing. So I felt we were pretty much guaranteed to have some great beers and delicious food.

When we went, the neighborhood was alive with shoppers for Small Business Saturday. We found ourselves a comfy seat on their massive dog-friendly outdoor patio to enjoy some people-watching with our beers. The brewpub did feature some great dishes and yummy appetizers, but it was a small selection. This was made up for by the long list of beers featuring styles of all colors and IBUs.

Many of the beers sounded great, but we settled on pints of the Cerveza Oscura Dark Mexican Lager, and Exhausted Nihilist, a Czech Pilsner. Honestly, we should have been more adventurous with our beer choices because their beer list featured an impressive lineup of unique styles. 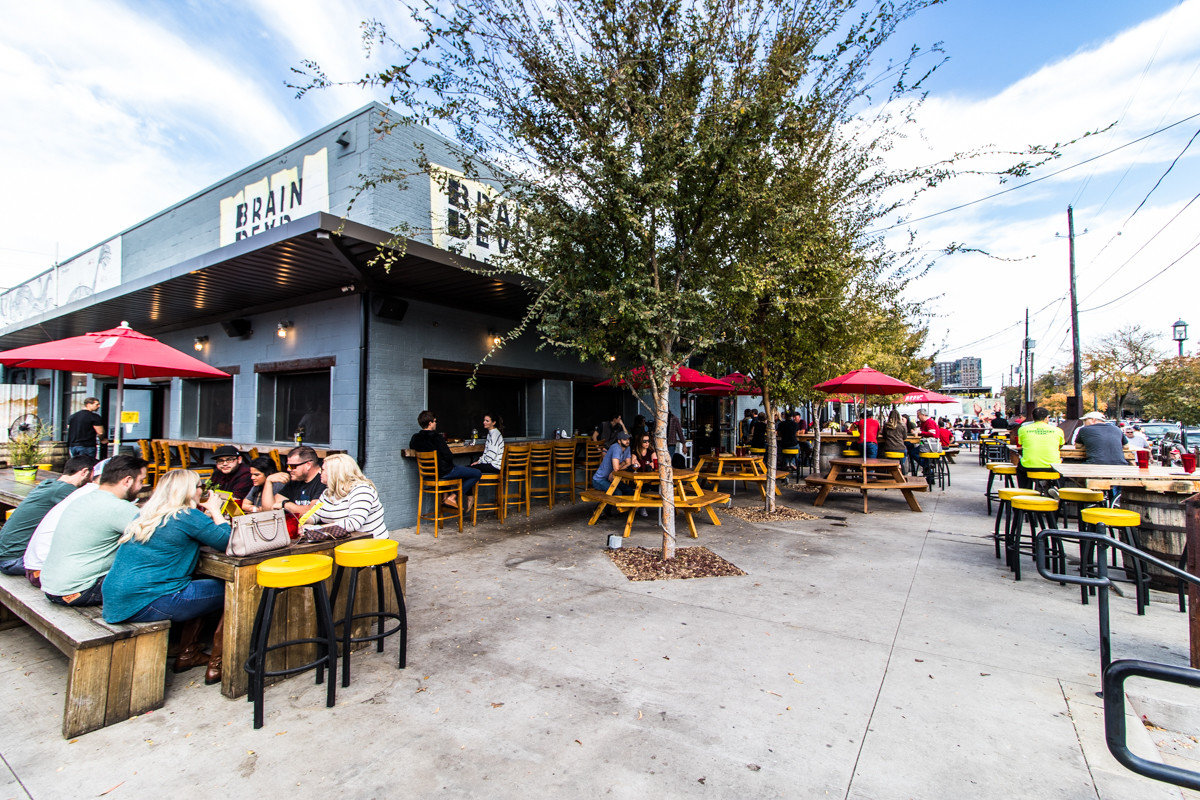 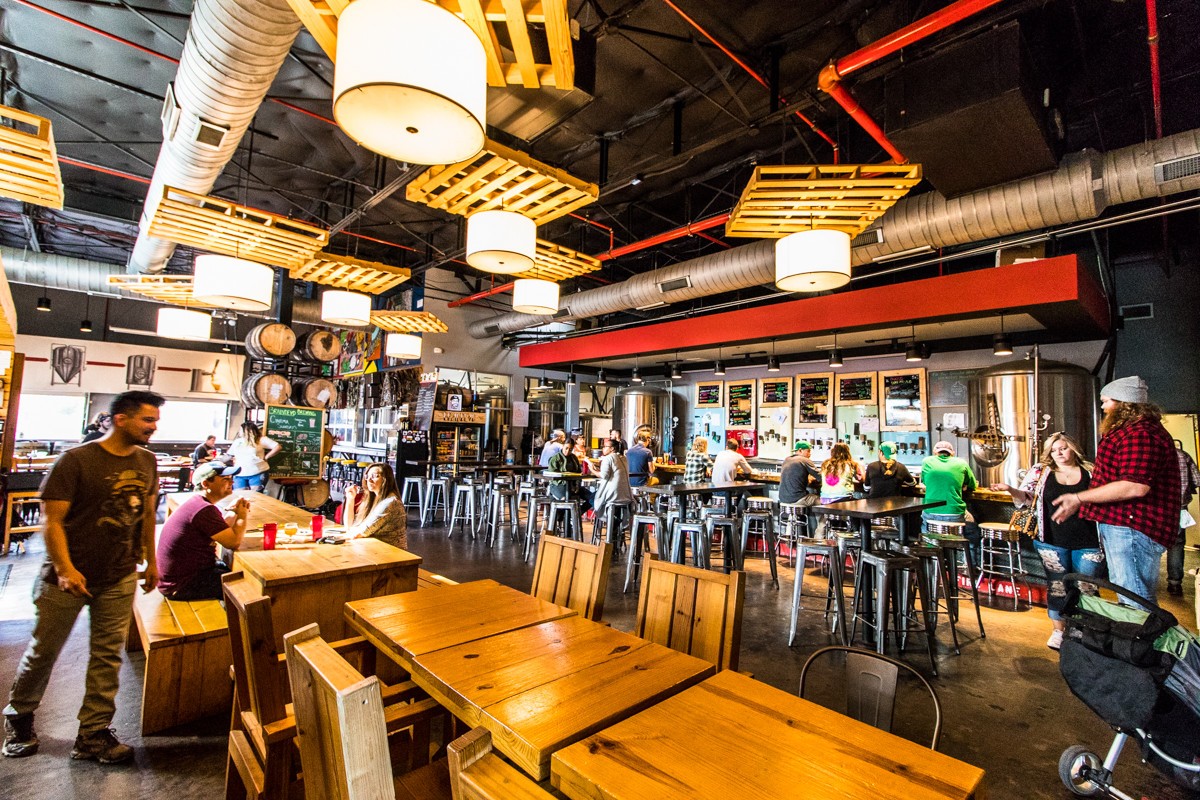 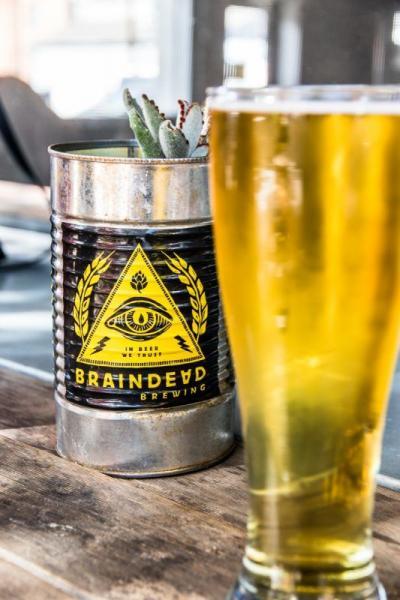 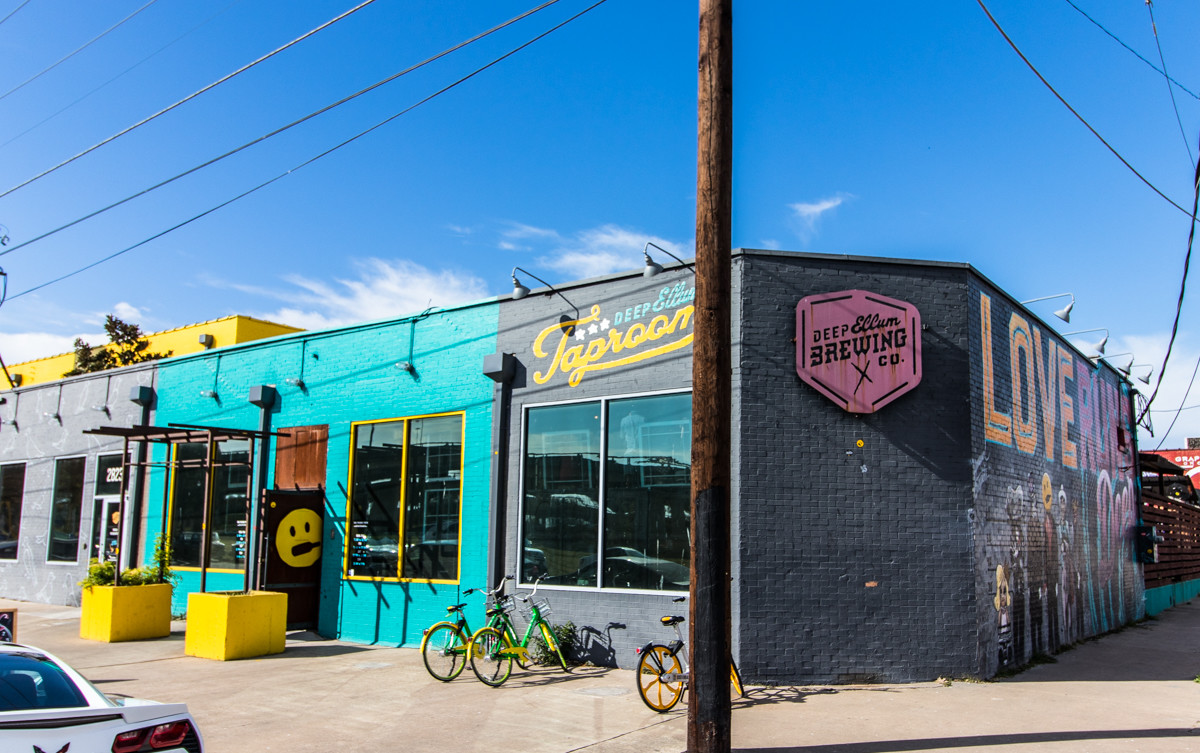 Deep Ellum Brewing was of the very first breweries to open in the city, and now they’ve grown to be one of the largest in the area. If you’re a Texan, you’ve probably had their Blonde too many times to count. Regardless of where you’re from, when you come to town, this is one of the breweries you should not skip over.Visiting their taproom in the Deep Ellum neighborhood of Dallas felt like a party.

The bright colors and funky vibes that I recognized from the artwork on their cans is mirrored in all aspects of the brewery. Plus, we had finally found a brewery with live music, and it was some good stuff too! I was happy to know they were dog friendly outside, and there was plenty of room for us. Inside or out, there’s plenty of relaxed seating, but the place did stay full. 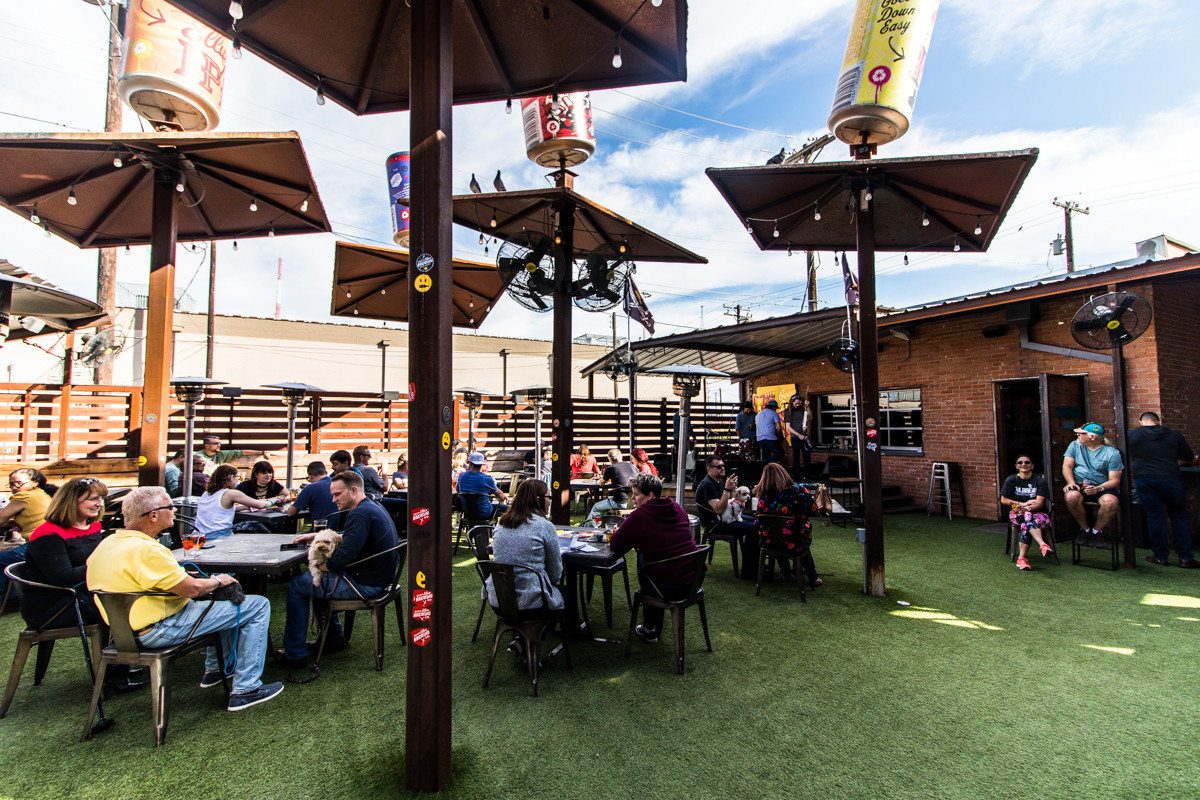 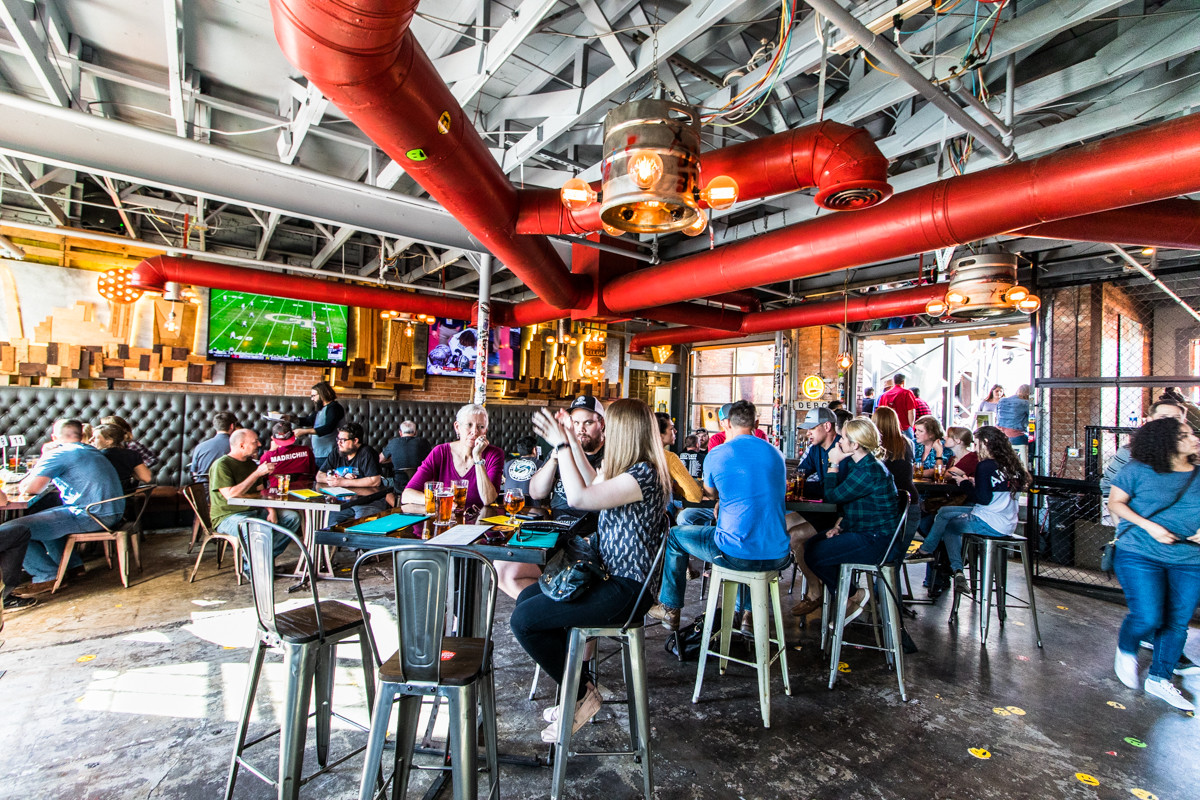 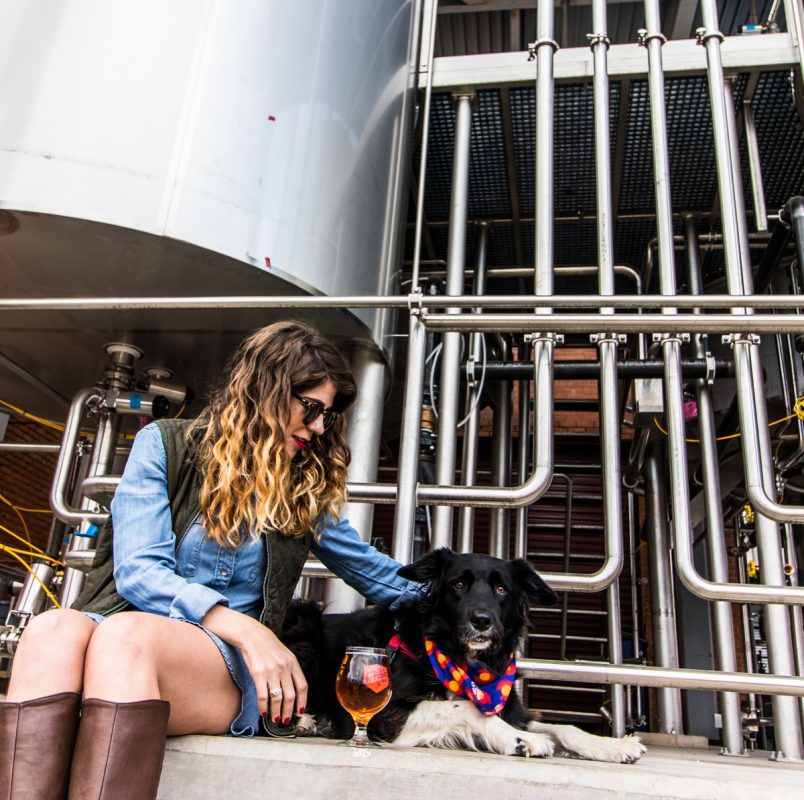 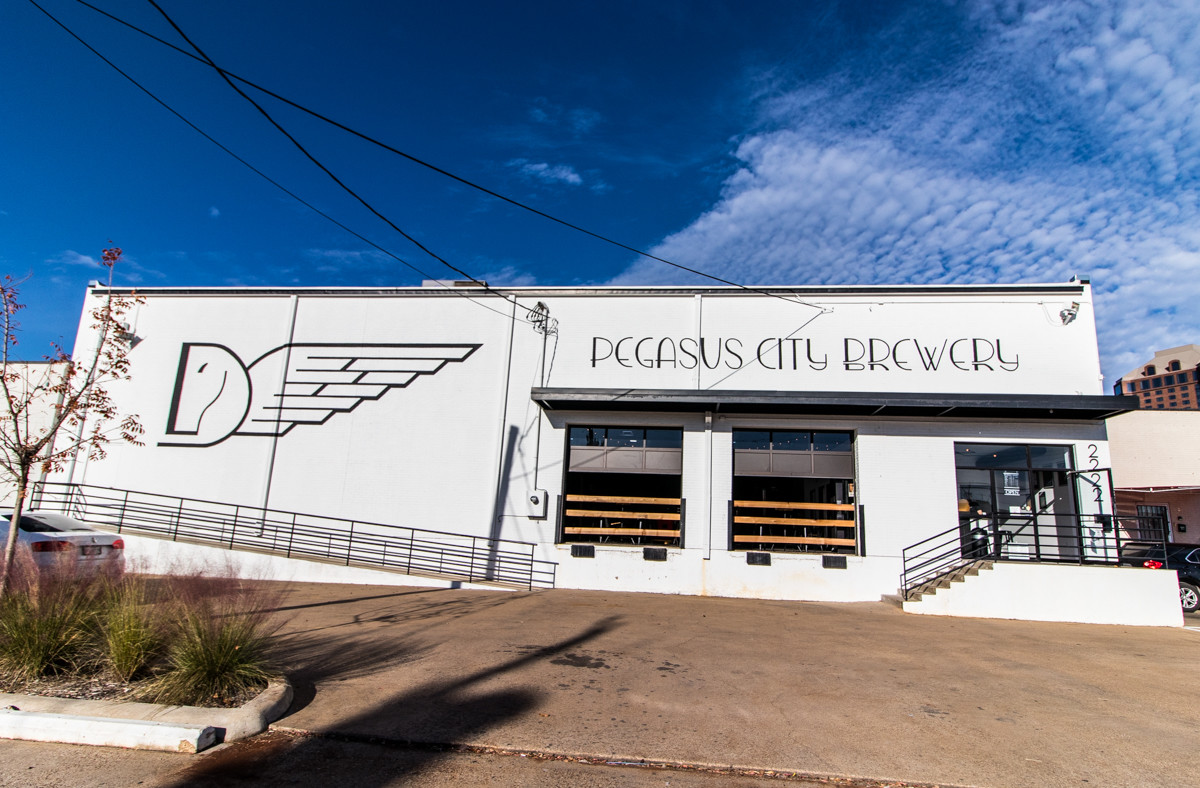 I remember first having Pegasus City beer way back at the 2017 Texas Craft Brewer’s Festival. What caught my eye first was their beautifully clean and simple logo. As someone who appreciates graphic design, it drew me to their tent to sample some of their beers and find out more about that logo.

Fast forward to a few months later, and now we’re on the way to stop by their new taproom in Dallas. And I spotted their building right away. It’s bright and eye-catching just like the logo that attracted me to them earlier this year.

The thought this brewery has put it into it’s branding is remarkable. Everything from the lighting to the furniture, and even the beer flights, matched the clean and simple vibes of the brewery. Pegasus City Brewery has been open for less than a year, but with neighbors such as Peticolas and Noble Rey, word is spreading fast about this impressive new Dallas brewery.

Overall, out of all the Dallas beers I had had that weekend, theirs were my favorite. Just like their logo and brewery, the beers were clean and of the quality that even a beginner craft beer drinker would notice. Easily my favorite was the caramel-colored Porch Ale, a English Mild Ale that I could literally drink every day.

The taproom is rather small, but the staff are super friendly and helpful. Though, at the time of our visit, they were not dog-friendly. However, I did appreciate all the arcade games available to play for free! 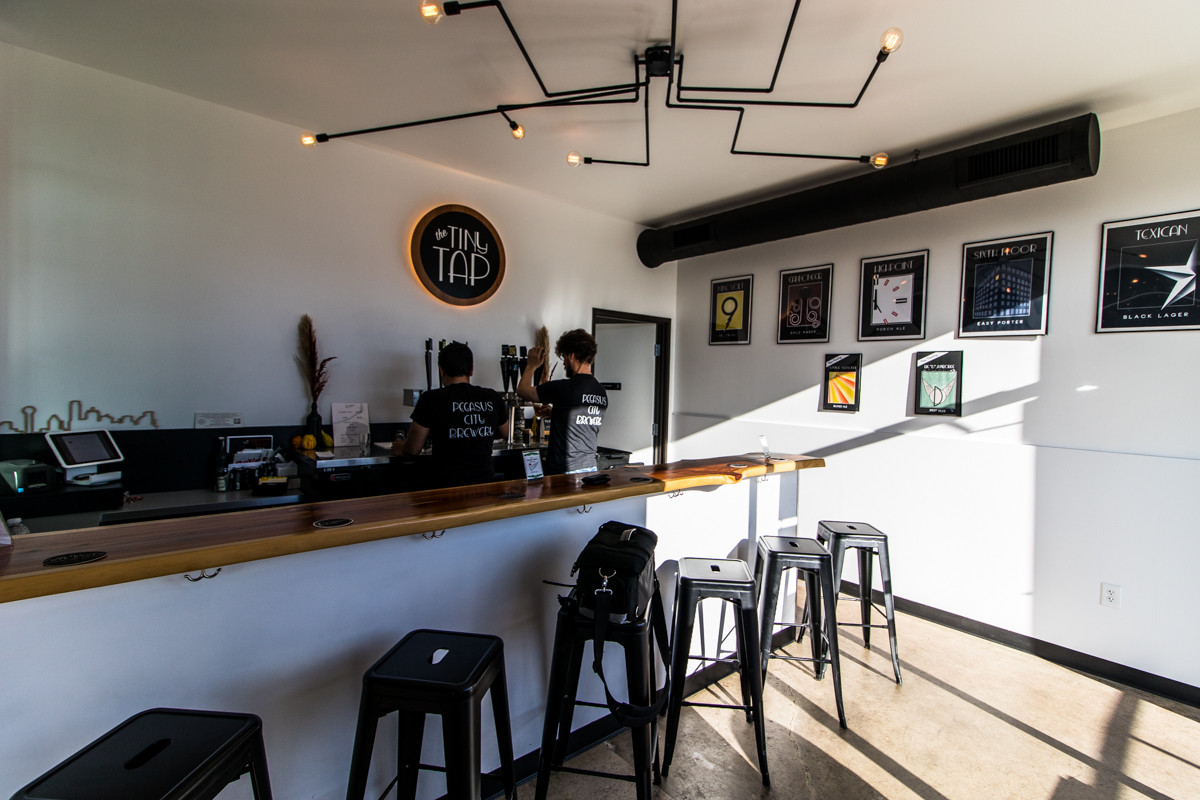 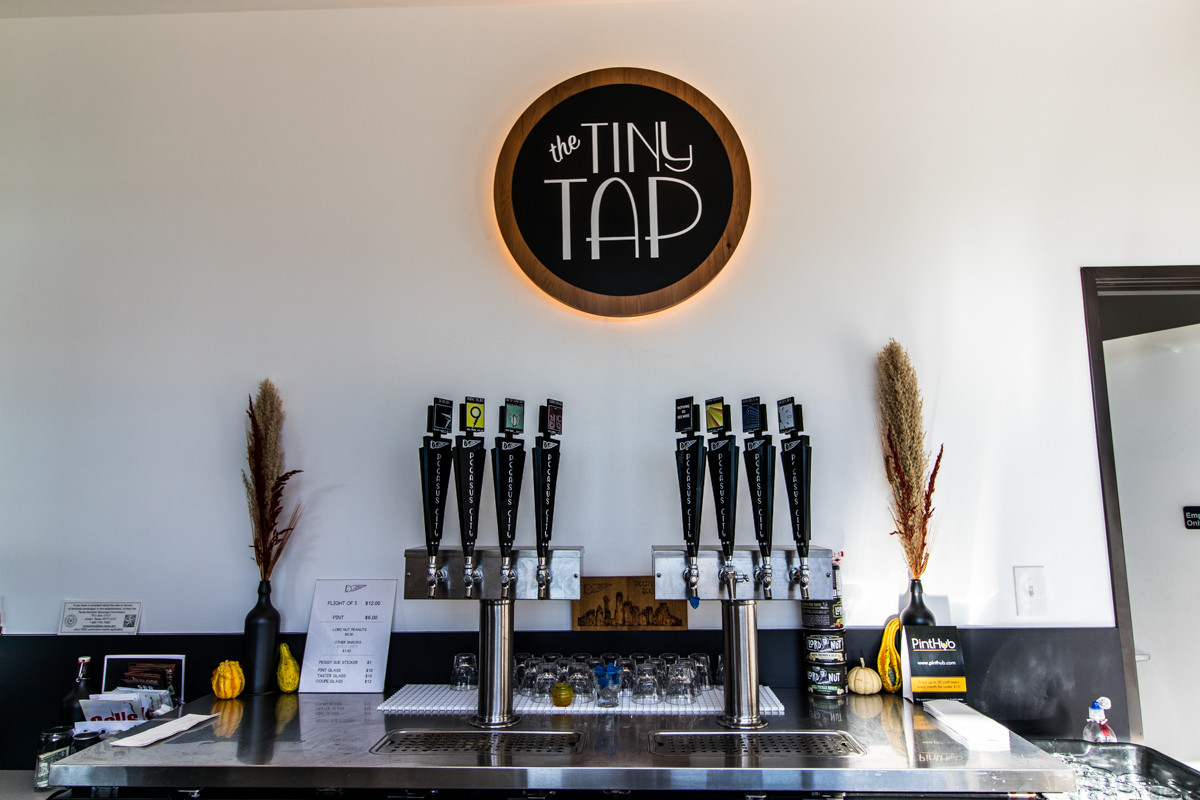 Heading to Fort Worth? Here’s your guide to the city’s best breweries (and BBQ!) 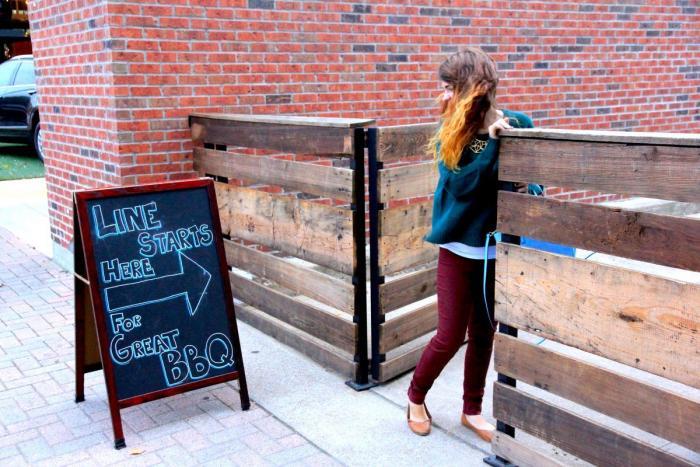 By the way, if you haven’t liked my Facebook page, make sure you do! I’m always sharing my newest interviews and adventures, fun events, and exclusive beer giveaways, so don’t miss out. Also, connect with me on Instagram and Twitter! 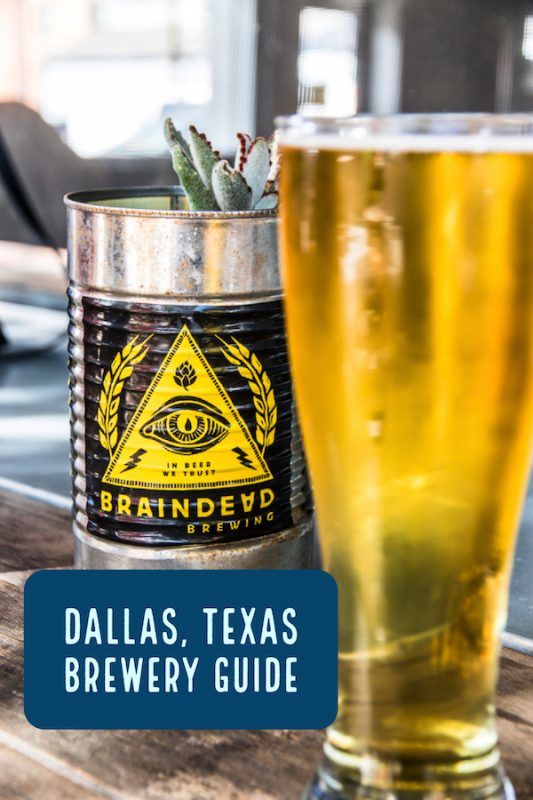 What to Know About Marfa’s Must-See Sights

6 Incredible Moments From 2017 I Never Want to Forget