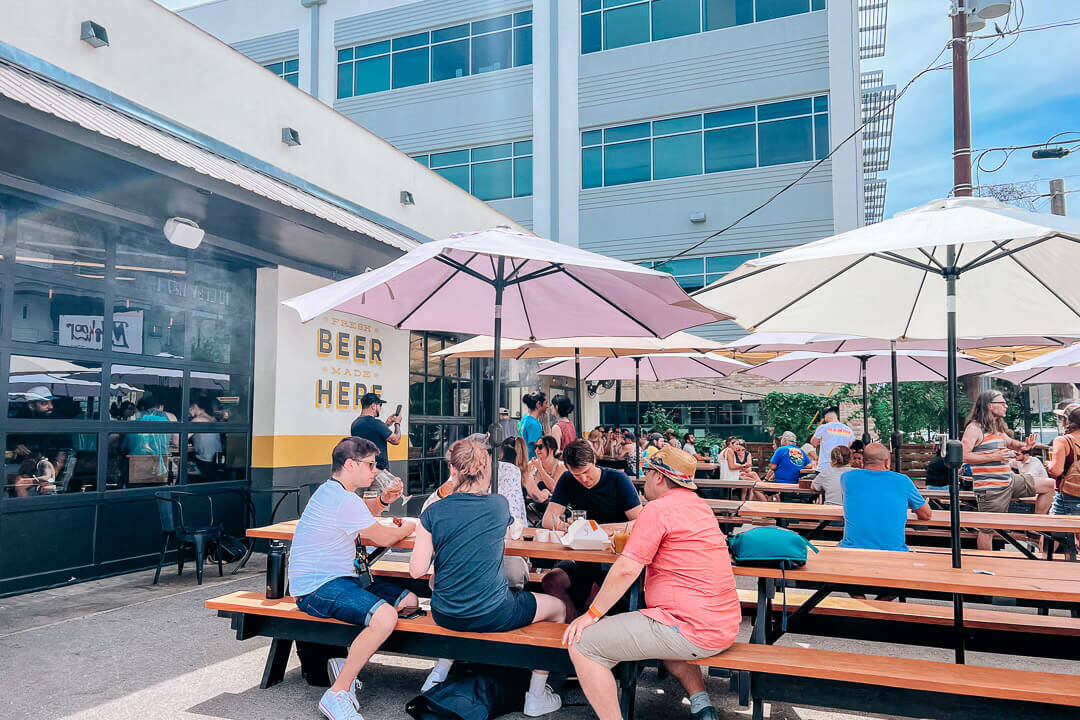 It seems (for now!) the dust has settled for breweries in East Austin. Which means I can now share an updated brewery guide for East Austin!

This area is one of my favorites in Austin. I feel lucky to have seen East Austin grown and flourish how it has in just a few years.

During one of my first visits to Austin a few years before I moved here, there was just Hops & Grain! Now, there are 11 breweries in East Austin. Each one doing their own thing, and kicking ass at it.

Looking for an East Austin Beer Crawl? Here is My Recommendation:

These four breweries are a short walk from one another, making for a perfect neighborhood brewery crawl. Plus, there’s plenty of places for food and the ‘Gram along the way. Heading east from downtown Austin:

Read This: The Best Things to Do in Austin, Texas

Whether you call this city your home, or you’re just here for a few days, here’s what makes these 11 East Austin breweries so incredible, and so ‘East Austin’.

Batch Craft Beer and Kolaches is an Austin, family-owned and operated kolache bakery, taproom, and retail craft beer shop. The cofounders of Batch, brothers Josh and Noah Lit, turned a portion of their facility next door into a brewery where John Sydner can brew his beers.

This is one of my favorite places to work during the day and it’s a spot I recommend to everyone coming into town, even before they started brewing their own beer. They’ve recently added Taco Bronco food truck giving you even more reasons to love this mish-mash of a brewery/kolache bakery.

Sour-mashed beers in a cute and bright taproom on the East Side.

The East Austin brewery is known for its unique sour-mashing beers. The process and taste is wildly different from a barrel-aged sour that you’d enjoy at Jester King. Simply, sour-mashing is a much quicker process and the beers are closer to their native styles.

This was one of my first Austin breweries, so they’ll always hold a special place in my heart. But I also love to recommend them to everyone because what they’re brewing is so unique and different from what many people are used to. Plus, their sours are kind of popular with those non-beer drinkers.

Central Machine Works is one of East Austin’s newer brewery and their building will take your breathe away. The massive 10,000 square foot building is from the 1940’s and was once an airplane part repair shop. The beer is made in full view of the dog-friendly beer hall.

But there is also an attached restaurant serving up classic pub fare. Currently, they are not putting out many beers, and they’re not consistently able to offer their brews on tap, you might want to call and ask before you make the trip out.

Founders, Devon Ponds and Ben Sabin are beer industry vets along with their head brewer, Nathan Crane, who comes from The Lost Abbey in California. Together, they make it their mission to combine West Coast brewing techniques with the “vibrant and eclectic” East Austin culture.

While the facility was first under construction, Friends and Allies brewed up its beers at 4th Tap Co-op Brewery in North Austin. Now with a space of their own, the team has room to experiment with more beer styles and work on collaborations with local farms and restaurants.  Not to mention their cool neighbors such as Austin Eastciders and Austin Bouldering Project, the largest indoor rock climbing gym in the States!

East Austin favorite upgraded from the airport to a 13,000 square foot space closer to town.

Located in East Austin, Hi Sign Brewing’s new 13,000 square foot space is a mega upgrade from their previous spot out by the airport! Their new home has a long history in the beverage industry history: first opened in the 1950s as an RC Cola bottling facility, then became Shiner’s first local distribution center, In the 1990s it was home to Hill Country Brewing & Bottling.

To bring the brewery to life in 2022, Hi Sign worked with OPA Design Studio, a local architect firm specializing in breweries, distilleries, and taprooms. (You might recognize the name as their founder Steve and I went on a crazy 9 day, 54 brewery Texas Road Trip a few years ago!

On tap you’re gonna find new brews such as a Pink Guava Kettle Sour , alongside all your favorites such as Violet Blueberry Blonde and Shamus Irish Red. Finally, don’t skip a visit to the bathroom here! The sleek and modern loos have a unique wallpaper featuring some of the best Austin icons.

German-style biergarden owned by royalty making lagers to enjoy alongside a selection of exotic sausages.

Koko’s Bavarian is a new German brewery and biergarten located in East Austin at 4715 E. 5th Street. It’s named after one of the partners, Koko— Konstantin Prinz von Bayern, who is the Prince of Bavaria, and his family started Oktoberfest in Germany in 1810.

The menu at Koko’s focuses on classic German beers brewed in house by Katie Low. Smoked meats will be on the food menu alongside all the best German beer garden fare.

Cozy taproom with a long list of Belgian-inspired craft brews. Plus, espresso and tacos.

Lazarus Brewing Company is right in the middle of east Austin’s popular Sixth Street district; you’ll spot the brewery by its bright teal exterior. Founded by beer-loving pastor, Christian Cryder in 2016, the brewpub has quickly become an Austin favorite and is always at the top of my recommendations to out-of-towners.

Read This: Best Places in Austin to Grab a Beer and Get Sh*t Done

For craft beer lovers, this East Austin brewery will leave you craving more. Lazarus is constantly experimenting and brewing the most-underrepresented styles of beer. I know we all say that so often, but really, this is a brewery that will make you excited about craft beer. However, many of Lazarus Brewing’s brews are one-offs, so try hard not to get too attached!

Established in 1997 by Chip McElroy, Live Oak Brewing is one of Austin’s oldest breweries. A few years ago they moved to a bigger facility with a new taproom now located right next to the airport.

Whether you’re coming from out of town, or just arrived back home, this is a classic first stop. Swing by their dog and family-friendly spot anytime though for a unique (and authentic) selection of German and smoked beers.

This brewery is an Austin classic and if you love the beauty of Texas Hill Country or German beers (and, of course if you love both) you’ll love it here at Live Oak!

Read This: Meet the Brewery Architects Designing the Next Generation of Taprooms

What once was a side project for Adelbert’s Brewery has now become one of the most exciting new breweries in east Austin. Oddwood Ales is a small brewpub in east Austin near Mueller Park with a focus almost entirely on American style wild ales and saisons

The East Austin taproom was designed by OPA Design Studio with the goal of being your cozy neighborhood pub. There are vintage arcades machines, large wooden chairs around hefty tables, and a custom bar with eye-catching navy and yellow tiles.

Large and colorful taproom with an exciting list of exceptional IPAs.

Southern Heights is a colorful and open taproom with plenty of room for you to catch up with friend or to find a quiet spot to curl up with a beer and a book. Additionally, the brewery is dog-friendly inside and out, and comes with a staff that’s equal parts knowledgeable and friendly.

Overall, the beer selection is quite small, but is continuing to grow and evolve in a way that will keep you excited to come back for more… especially if you’re a fan of IPAs.  The tap list leans heavy in favor of hop heads, but here’s hoping they expand to more styles soon!

Read This: All of the Best Dog-Friendly Bars and Restaurants in Austin

Last, but certainly not least is Zilker Brewing Company and their lively taproom right in the heart of East Sixth. There’s plenty of seating outside if you want a great view to drink beer and people watch. But if it’s too hot, find your spot inside where every step of the brewing process is put on display.

Once you’ve taken in the beauty of the brewery’s custom bar, crafted by local artists, Petrified Design, take a peek below. You’ll see the kegs and lines that transport some of Austin’s best craft beers into your glass.

Impressively, Zilker Brewing has become known for their skill in working with delicate Trappist yeast strains and clean American techniques. Their beers are always balanced, while still complex, and with a proper finish.

Check out what’s brewing in my side of town with the North Austin Brewery Guide! Or get a guide to all the Austin breweries here.