3 Weeks in Europe by Car | My Europe Travel Itinerary 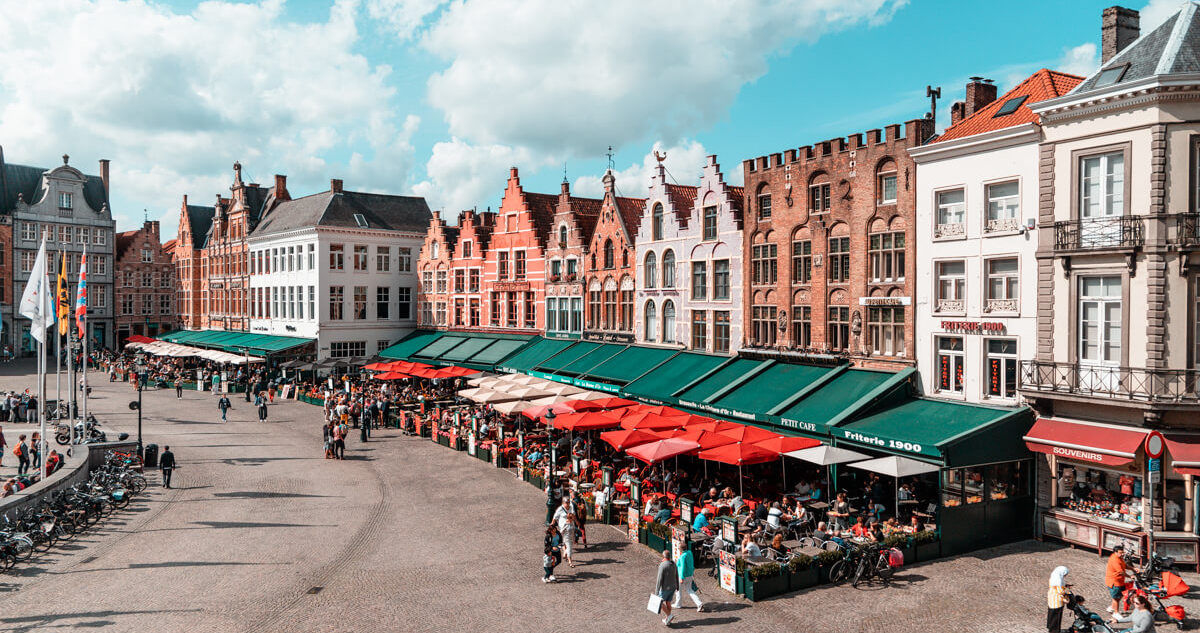 So I finally made it to Europe.

I went all in and did three weeks in Europe by car. Driving through Prague, Belgium, and Germany (with a stop at Oktoberfest!). Which shaped up to mighty fine Europe itinerary for beer drinkers…

Yes, Europe is typically done by train. But, we typically travel by car. As often as we can. Mainly because :

Enough of this chit-chat, let’s get into it!

Here’s a Glance at Our 3 Week Europe Itinerary

Note: The order of my trip is a little wonky. I flew in and out of Prague before beginning the Europe road trip. Prague had to be my first stop, and I knew I wanted to do Oktoberfest, which started three weeks from when I landed… SO it might make more sense to rework the order of the places according to when you visit.

Flying in from London, we arrived in Prague quite late on our first night in Europe. After resting up, the next day we set out to explore the area. Immediately, I was enchanted by the city. You could call it love at sight.

I never expected to fall in love with Prague as hard as I did. The city is absolutely GORGEOUS and its architecture has you always looking up. Many of the buildings here date back hundreds and hundreds of years!

Prague is the capital of the Czech Republic and is known for its numerous styles of architecture, city squares, and historical monuments. It was one of the cheapest cities on our trip to Europe.

By far, and overall, Prague was my favorite city during this trip. And I would highly recommend it to all sorts of travelers to Europe. It’s must visit, and plan for at least a few days to see and experience it all.

What We Ate and Drank:

We flew from Prague to Brussels and picked up our rental mini-van (yes, you read that right) for the rest of our Europe trip. It got great mileage, but it was not the best car for driving through city streets, parking in little spots, or navigating through parking garages. We did it though.

Once we picked up our car, we drove west towards Bruges.

Note: Another picture of our mini-van is at the end of this blog post. Along with some tips for driving through Europe!

Because Prague was the first stop, and Munich the last, we figured it would make most sense to head the furthest west, and make our way back east, ending in Munich.

So, technically, we didn’t stay in Bruges.

Still, it was a cool spot. Plus, our AirBNB host had a parking spot available at their house in Bruges. So on ‘full day’ in Bruges, we took that as a time to explore.

If you’ve never seen the movie In Bruges, highly recommend watching it especially before your trip! Don’t believe Colin Farrel’s character constant complaining of how much the city sucks. He’s absolutely wrong.

Bruges is romantic and wonderful. Not to mention plenty of beer, stellar restaurants, and easy availability. No wonder several million tourists come visit each year.

After Bruges, was Ghent.

Only a short 45 minute drive away. I didn’t do much research about this city, just saw that some of my favorite bloggers recommended adding a stop. So we only had one night booked.

Retrospect, I wish I had booked two nights here (instead of having the next two nights in Brussels).

I didn’t know what to expect honestly, just knew that our hostel (Hostel Uppelink) had a great view of a gorgeous neo-gothic cathedral.

We had to park in a garage just outside the main city square, so coming into Ghent was a bit strange. It looked like a typical Belgium town with small houses, and some pubs and convenience store. Looked like that all the way up to when we entered the parking garage…

Once parked, we exit the garage took the corner to our hostel, and immediately dropped our jaws.

Ghent is gorgeous. Every single piece of it is stunning. And our hostel was right in the heart of it.

Our hostel, also offered a free walking tour, which we eagerly did the next morning. Getting to hear about the city from someone local, and passionate, is a blessing.

There is a lot that would be taken from granted walking around these old European cities. Yes, they’re beautiful to look at, but the history is usually more fascinating.

We loved Ghent, and would have loved to have stayed longer, but it was onto Brussels, the capital of Belgium.

We had a little difficulty driving into Brussels. We got lost in tunnels, went down the wrong way in one way streets, and drove around the block for 20 mintutes to find a spot big enough for us. It was the most stressful 40 minutes of my life. Brussels is big, and the traffic isn’t organized well.

But we left the car once we found parking. The city is fairly walkable, and Ubers are fast and cheap.

I enjoyed our time in Brussels. It was here where we dined on fries and filled up on waffles. The city is a weird mix of new and old, ancient and modern.

No better proof of that than the 100+-year-old Cantillon Brewery, about a mile from the city center. It’s a must-stop for any and all beer drinkers.

What We Drank and Ate:

After Brussels, we departed for Germany. The first town we stopped in was Aachen, an adorable small town, home to Printen, a German style of cookie similar to Gingerbread. (If you visit stop at the most popular shop, Nobis Printen, for all sorts of cookies and sweets.)

Jason’s always loved Germany, and had been previously. This was my first visit and the country I’d been looking forward to the most. I’m a huge fan of German beer styles and was eagerly anticipating the clean and crisp lagers that were absent in Belgium.

But before Munich, we had a blast driving through all Germany’s gorgeous countryside. The first official stop of the trip was Cologne, of the Kolsch.

It was a big city, and compared to our earlier time spent in Aachen, we decided to stick to the small towns for the rest of the trip.

After a few days of drinking Kolsch in Cologne, we departed to the most beautiful, straight-out-of-a-fairytale place I had ever been: Bacharach.

We avoided the main highways and drove Highway 9 along the Rhine River to Bacharach. But not before stopping first for some local wine and an impromptu picnic.

After the Rhine River is over and under to Baden-Baden, nestled at the foot of the Black Forest. We even got to drive through a small part of France.

Does that count as another country visited? :)

Leaving Baden-Baden, on our way to Munich, we took the very scenic route through the dense and dark Black Forest. We stopped at the mountain town, Mitteltal for a quick bite, and scenic views that stretched for miles.

Germany has over a dozen gorgeous scenic routes. This article helped us a lot in figuring out which scenic routes we could– and should plan for.

The Black Forest is gorgeous, and better appreciated driving through it’s windy and shaded roads. I think the highway we took up through the ski resorts in Mitteltal and ending in Freudenstadt was the perfect route for seeing the Black Forest.

After we made our way out of the Black Forest, we stopped in Freudenstadt for a bit of Drindl shopping. :) There were a few drindl shops in town, and I knew I’d save money buying one here instead of Munich.

So once the perfect drindl was bought, it was time to make the long four hour drive into Munich.

Once we arrived in Munich, the first thing we did was drop off our car. Since it was our last city, we didn’t really need it anymore thanks to public transportation and general walkability of most European cities.

And god, we were so relieved to drop that thing off. Driving a car in Europe wasn’t the issue. The issue was driving a big ass van through countries known for their small cars.

But we did, and there were many crazy moments with that van during the trip… I’m Jason and I will laugh at those in the future.

Going to Munich, we were there mostly for Oktoberfest. Which kicked off the following morning. Going to bed felt like I was a kid again and it was Christmas Eve.

It was finally time.

I won’t get into the details of Oktoberfest too much here. That’ll be another post or few. ;) All I’ll say though is, WOW. Totally worth it, I’m glad I did it, and I probably won’t ever need to go again.

Note: If Oktoberfest, and my work conference, weren’t a factor in our itinerary, I probably would have visited Munich after Prague.

What We Ate and Drank:

Notes on Traveling in Europe by Car

With a rental car, especially in Germany, where there are about a dozen different scenic drives you can take. Belgium was great for driving because it was such a small country and we could cover a lot of ground on our terms.

Driving through the countrysides and small towns wasn’t a problem. Driving through cities like Brussels and Munich was terrifying. Those people love their street signs. There are bikers and pedestrians everywhere in every !

Also, we were mostly limited to staying at places with parking available, or nearby. Once we got to our place though, we usually stayed parked.

Europe is fairly easy and cheap to travel by train if you don’t want to go by a rental if you want to. , the rental and fuel costs about equaled out with the time+money for traveling by train

Our overall opinion: We loved traveling through Europe by car!

What to Know About Celis Brewery’s Return to...