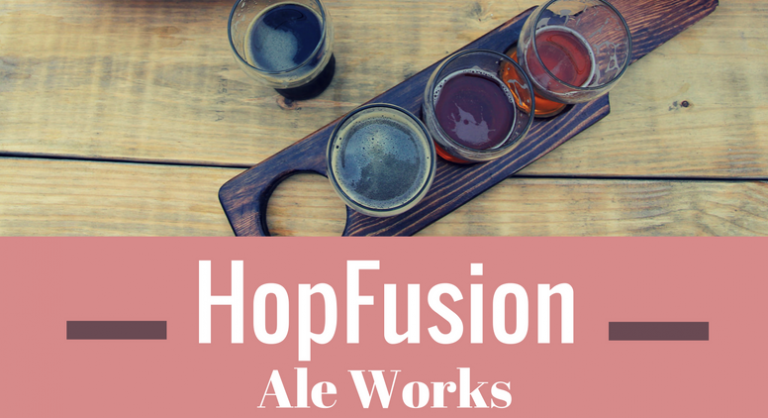 HopFusion Ale Works – Macy Moore and Matt Hill are two guys who are all about good friends, enjoying the ride of life “preferably on a bicycle,” and brewing great craft beer in Fort Worth.

During my recent Fort Worth trip I headed out to visit DFW’s newest brewery. I was lucky enough to visit at the end of November, during their Opening Weekend in Fort Worth’s Southside neighborhood. They have a mission to bring the community together and they’re doing it with their craft beers.

Jim from Rabbit Hole Brewing had mentioned to me that I needed to go visit the guys at HopFusion Ale Works before leaving town. He said that their “Feisty Blonde beer could easily dethrone Revolver’s Blood & Honey.” A big claim that definitely needed some following up.

We drove into Fort Worth’s Southside to a neighborhood that looks like it’s undergoing some change. There are a few older buildings and awesome street art nestled between new businesses like HopFusion Ale Works.

The brewery had a donut truck sitting right out front and the warm smell hit me before I even had a chance to cross the street.  Which hopefully is a sign that the brewery will keep food trucks on site to go along with their craft beers!

HopFusion had a sizable selection on their opening weekend that boasted several unique and different beers. The people behind the taps were more than happy to walk us through their brews. 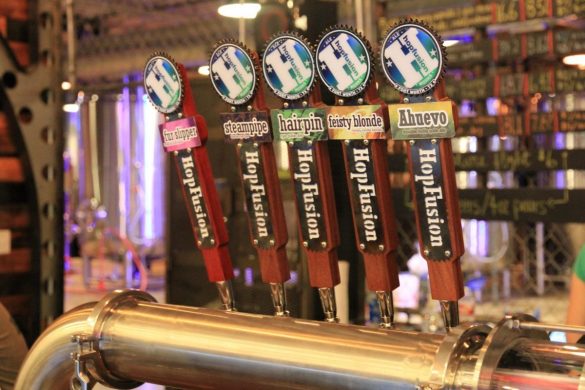 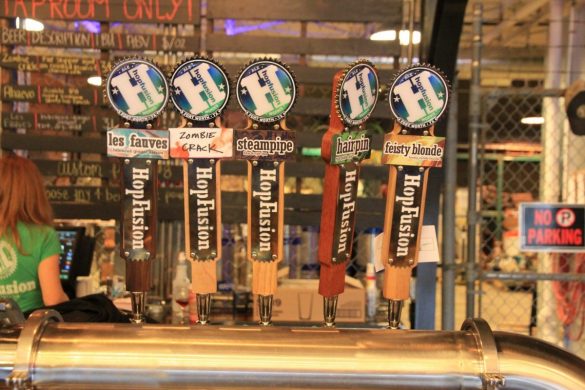 Finally: HopFusion’s Feisty Blonde did live up to the hype! At a high 8.27% ABV, this honey vanilla blonde ale has a touch of pure Mexican Vanilla. Then there’s the raw brow sugar to that rounds it all out for a smooth finish. It was incredible and would be good to share with anyone, anytime of the year.

Their Steampipe Black Rye IPA was another unique creation that was more than incredible. Steampipe has a “peppery, spicy profile…with dark roasted barely to compliment the citrus backbone of the Amarillo hop.” 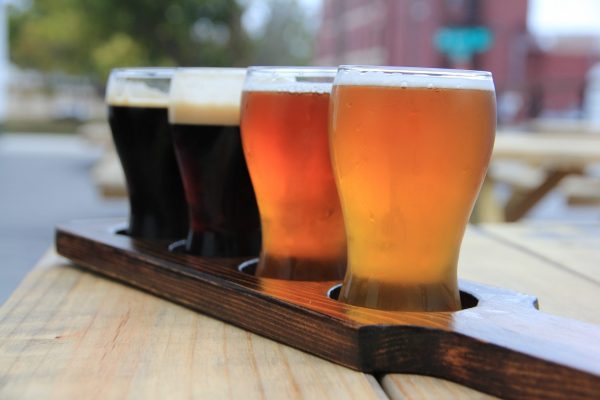 One of the most exciting parts of HopFusion is their vision to create a space that will “fuse” together all the things that they love about their Fort Worth Neighborhood. 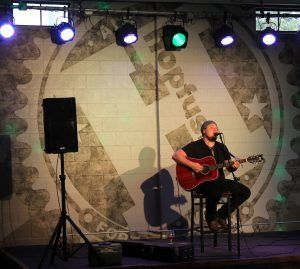 Matt and Macy were homebrewers for years before opening their own brewery and that homebrewing attitude has all but disappeared. Both love the craft of brewing and creating a community around their art.

The guys are both very eager on showing the action and process behind the beers they’re brewing at HopFusion.

So, if you go for a brewery tour expect to see plenty of action cause they’re planning to schedule Saturdays as brewing days! 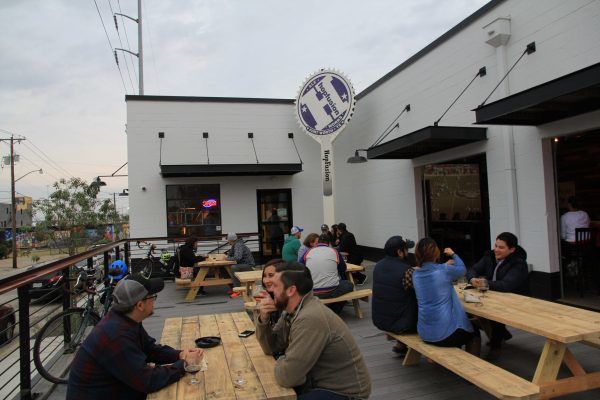 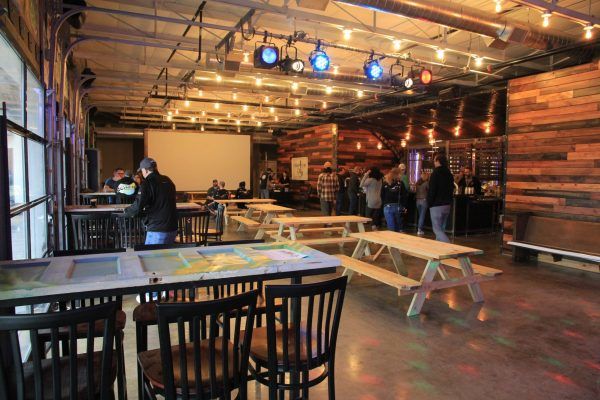 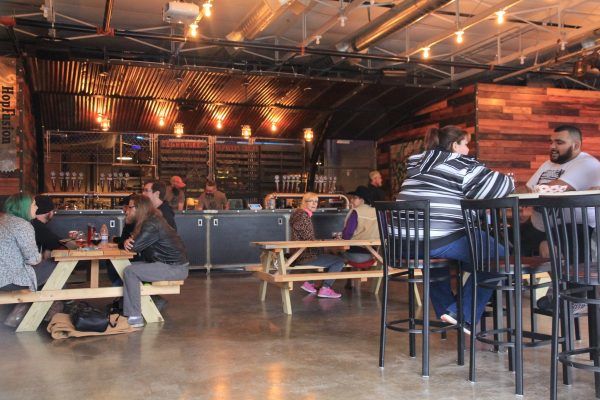 During my visit to HopFusion on their Opening Weekend in November, I got to see the end result of their labor of love for brewing beer.

Macy showed me the beautiful brew tanks and equipment used to make their craft beers. The guys went all out and put up changing colored lights to draw everyone’s eyes back to where the action happens.

See for yourself below: 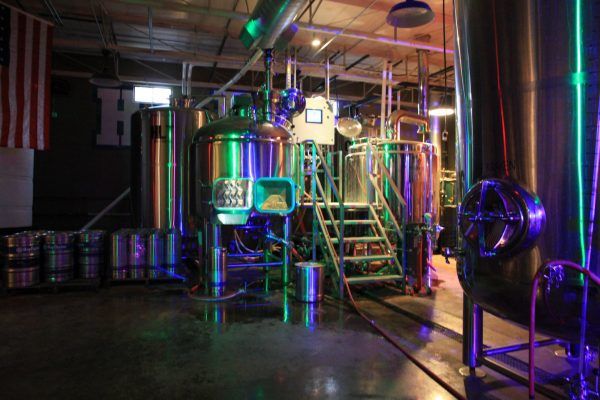 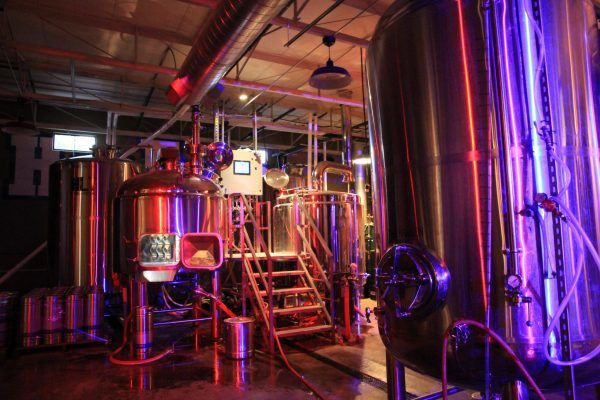 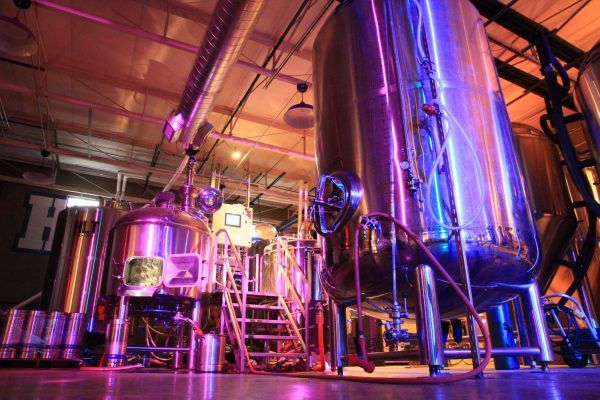 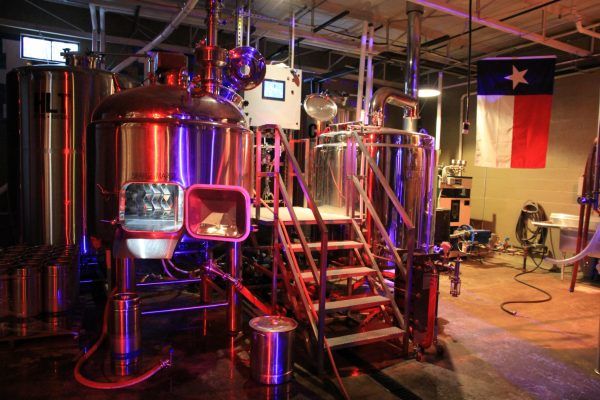 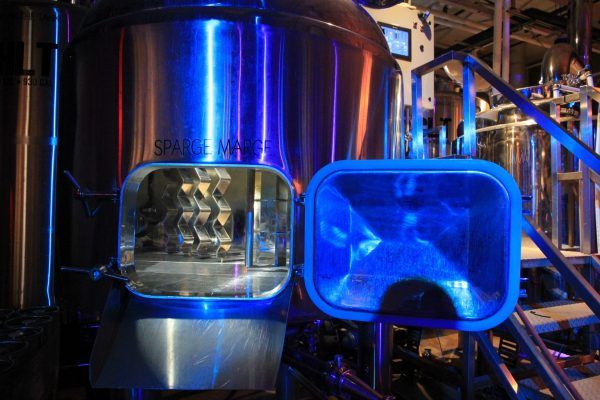 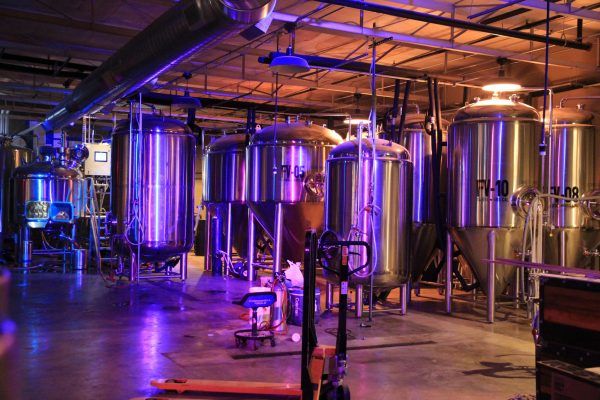 The building used to hold classic cars but now it holds an impressive brewing system. Their brewery also has a 2-barrel pilot system, making it easy to keep experimenting with HopFusion brews.

Hopfusion Ale Works in Fort Worth has an impressive setup that I got to learn about from Macy himself! It’s a 15 Bbl system and 180 barrels of total fermentation room.  Macy loves to experiment with mixing beers and flavors together so they also have a 2 barrel system and room (and hopes) for six more 2-4 barrel systems. 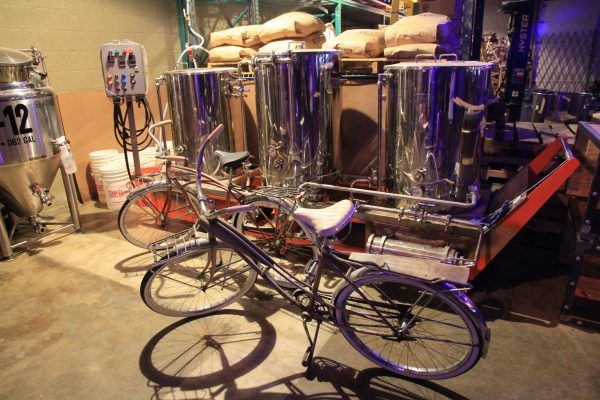 Between a few of their tanks I spotted a few cool, vintage looking bikes, kinda out of place. So I had to ask what they were doing back there. Well, Macy and Matt are all bikers and he found those two out of a barn but they were completely ruined. Macy knew a friend who would restore them and now they’re “brewery bikes.” Matt and him ride the bikes around often and to go get lunch in their Southside Fort Worth neighborhood.

Matt Hill and Macy Moore were homebrewers for years before opening HopFusion Ale Works in their Southside Fort Worth neighborhood.

But a discussion during a bike ride back in 2014 became the beginning of the brewery’s history.  Not long after that ride, plans turned into actions and eventually they needed a place for their brewery. 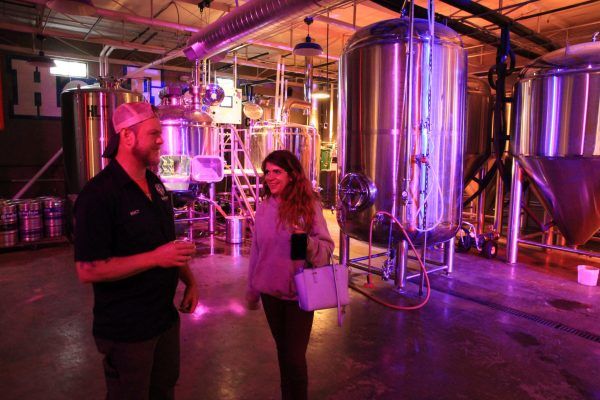 Macy explained to me his choice to staying in their Southside Fort Worth neighborhood, “We were looking in this area, we lived in this area, we love this area.” Macy saw the building had become available to lease so he called up the owner to schedule a tour of the old car garage.

Jesse, the guy they’re leasing from, came to meet Macy at the front of the building and hadn’t even unlocked the gate yet.  He had to ask Macy a few questions before even leasing this building to someone. 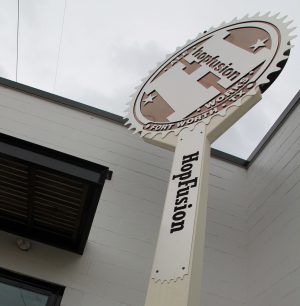 The Original Texaco Post from the 1930’s, now proudly shows off the HopFusion bike gear logo.

But it was easy for Macy to explain that it was going to be a brewery and taproom and he explained their “vision and how we were from this neighborhood.” As fate had it, two bike groups rode past the two in front of the future HopFusion Ale Works building, and “waved to me and said, ‘Hey Macy!’ Right after he unlocked the gate and showed me the building.”

HopFusion often has to assure people that they don’t plan on being a brewery with nothing but hoppy beers and IPAs. Instead Matt and Macy are keeping things balanced and still brewing the more complex beers and flavors.

So I think we can always expect a constant rotation of great, unique brews from Matt and Macy at HopFusion. 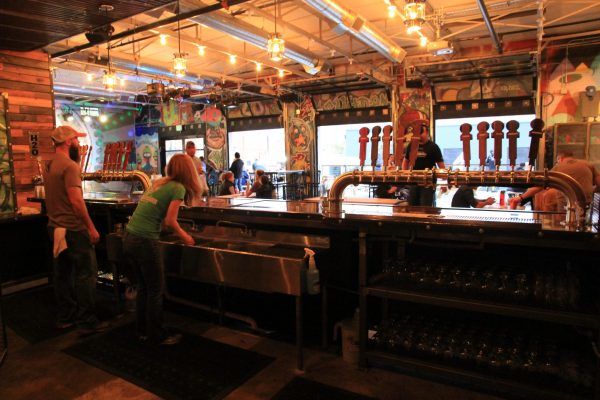 For example: Macy had let us try a taste of a Winter Shandy he created that was an imperial milk stout mixed with fresh lemonade. If it sounds curious, that’s because it totally was! It was also super dark and surprisingly delicious, well deserving of its name.

I had a great time visiting the brewery and talking with the people from Southside Neighborhood in Fort Worth, Texas. It’s a cool part of Fort Worth that is having a positive impact from the addition of a craft brewery. 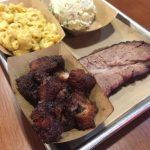 Especially one like HopFusion where the community is fused together under one roof.

Related: Craft Beer and the Best BBQ in Fort Worth

Additionally, we were recommended to hit up a delicious BBQ joint down the street, Heim Barbeque, by some new friends we made.

They had Burnt Bacon Ends that were to die for! This Texas BBQ is just continuing to rock my world! It was the perfect last stop on our way out of the DFW area! 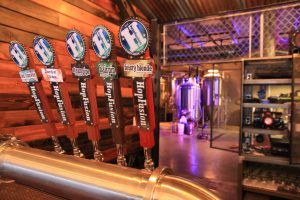 HopFusion is currently open Tuesdays through Friday, 5-11pm and Saturdays and Sundays, 2-11pm. They’re at 200 E Broadway Avenue in Fort Worth, Texas! Definitely go visit them if you’re in the Fort Worth area!