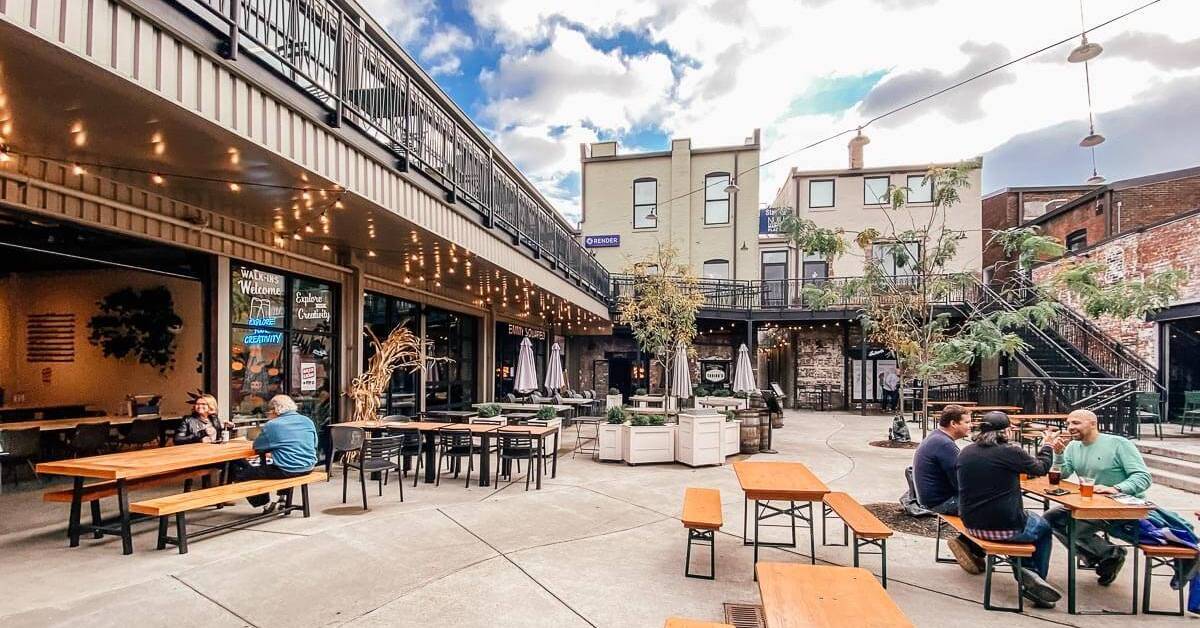 Louisville is known for its bourbon, but did you know that it also has some of the best breweries in all of Kentucky? With so many different beer styles to choose from and new breweries popping up every year, Louisville is a great place to go if you love craft beer.

Check out my list below for some of the top breweries in Louisville, Kentucky (along with my favorite picks for where to drink craft beer while in town)!

Louisville is a great city for craft beer. With many world-renown breweries and taprooms, it’s hard to get bored of the options.

As Louisville’s craft beer scene continues to grow, more and more breweries are popping up all over town. Here, I’ve compiled a list of Louisville’s top breweries. I’ve included their location, what they specialize in (beer styles), and what I think is the best thing on the menu.

Now you’ll know where to go when you want a cold one!

Known as the “Gateway to the South,” Louisville, Kentucky offers more than traditional southern hospitality. Straddling the border of west-central Kentucky and southern Indiana, Louisville is best known as the home of the Kentucky Derby, along with incredible bourbon distilleries.

Louisville is the largest city in Kentucky, with a population of around 617,000, and spanning about 66 square miles. This city has four distinct seasons, with summer generally hot and humid, while winters are cold and wet. Yearly, the temperature usually ranges from a low of 28°F to a high of 88°F.

Other Louisville nicknames include “Derby City,” due to the Kentucky Derby, and “River City,” because of its location on the Ohio River. Louisville might be best known for its bourbon, but this city boasts a surprising number of fantastic craft breweries!

Louisville is quickly becoming one of the top beer cities in the country. With over 20 breweries in Louisville, there are plenty of options to choose from!

Whether it’s a small local brewery or a nationally recognized company, there’s something for everyone. Here are 10 of the best breweries in Louisville that offer unique experiences and great craft beer.

As one of the first brewer-owned and operated breweries in the city, Against the Grain is one of the most popular Louisville breweries! Jerry Gnagy, Sam Cruz, Adam Watson, and Andrew Ott, who previously worked at a different brewery, opened this joint in 2011.

Against the Grain’s beers are categorized into six main styles: Session, Whim, Hop, Malt, Smoke, and Dark. My favorite beer is their classic, “A Beer,” an American Lager.

This extremely cool Kentucky brewery has four locations around Louisville. One of the locations includes a smokehouse that serves items like pulled pork, brisket, and spare ribs. Another location consists of a sandwich emporium, while the central location serves taproom staples like burgers, pretzels, and wings. No matter which site you visit, you won’t leave hungry!

Atrium Brewing is highly recommended by the locals, and for good reason! With experimental brews like pastry stouts and hazy IPAs, there are several unique options for every taste.

This brewery in Louisville features plenty of exposed brick, different seating options, and a trendy neon light that reads “Atrium Brewing.” If you’re feeling hungry, this brewery partners with Daryk’s to serve delicious tacos, burgers, loaded fries, and even some vegan options.

Falls City Beer opened in 1905, making this one of the oldest Louisville breweries! This joint has survived prohibition, world wars, and pandemics, yet it is still standing, so you know it has to be good.

The outdoor patio is the perfect place to relax on a warm evening, featuring picnic tables, a pergola, greenery, and string lights. The indoor taproom is lively and fun, featuring rugged exposed brick and a lit-up neon sign.

While I was here, I really enjoyed drinking the Kentucky Common. One of a handful of American beer styles, this beer is Kentucky’s native beer and is actually the soon-to-be official state beer.

Located in the Clifton Neighborhood, Gallant Fox is one of the cutest Louisville breweries. This joint showcases trendy wood paneling, unique lighting around the room, and wall art showcasing hilarious and adorable foxes throughout the space.

Gallant Fox was named after the horse that was the 1930 Triple Crown winner, which only adds to its charm. Alongside their beer selection, with plenty of lagers, ales, and IPAs, they offer over 150 Kentucky Bourbons so that you can experience the best of both worlds!

Gravely claims to be the world’s first music brewery, so this is one of the top Louisville breweries for music lovers. The music-centric atmosphere boasts decor made out of instruments and sound equipment, which creates an enjoyable atmosphere with cool vibes. The taproom itself has plenty of space and modern decor, and there is also a massive outdoor space to enjoy on warmer days.

This family-owned taproom has a food truck onsite, called Mayan Street Food, where you can order tacos, burritos, nachos, and quesadillas. Personally, my favorite beer was the fantastic German Pilsner, but another local favorite is the Blood Orange IPA.

Nestled between Downtown and the Original Highlands, Mile Wide Beer Company is located in a building that used to be a biscuit factory. Today, the space has multiple seating options, from couches to outdoor picnic tables, as well as board games and a game room, making this one of the most fun Louisville breweries.

Mile Wide Beer Company brews many really unique beers that push the boundaries, but these brews are still high-quality nonetheless. One example of this is the Frivolous Ideation, a pastry stout with peanut butter, chocolate, and vanilla.

A post shared by Have Spork Will Travel (@havesporkwilltravel)

Located in the Schnitzelburg neighborhood, Monnik Beer Company was opened in 2011 by owners Brian Holton and Ian Luijk. This brewery has a massive tap list with a selection of over 20 beers, which features a mix of rotating seasonals, classics, and one-off brews.

Besides the beer, Monnik is one of the best Louisville breweries with food. You can order a variety of bar snacks, burgers, and sandwiches, but the beer cheese is a local menu favorite. Whether you sit in the modern indoor dining room or adorable outdoor patio, incredible brews and food await at Monnik.

Ten20 is nestled in the historic Butchertown neighborhood and features a large, dog-friendly beer garden, making this one of the best dog-friendly breweries in Louisville, KY.

With over 22,000 square feet of space, you will have plenty of room and seating options while you’re here. The beautiful interior is an industrial and chic atmosphere, with high ceilings and modern furniture. Outside, you will find covered and uncovered spaces with twinkle lights and a variety of furniture options.

Ten20 currently has a selection of 16 beers, and you can also order an artisan pizza if you get hungry. This brewery recently opened up a brand-new location in Anchorage, Kentucky, which looks just as fantastic as the original location in Louisville!

West Sixth Brewing was originally founded in Lexington, Kentucky in 2012, so this happens to be their Louisville location, which is also the home of their barrel-aging facility. Located in the NuLu neighborhood, West Sixth in Louisville is in a fun outdoor market area.

The outdoor courtyard, surrounded by local businesses and charming brick walls, is a great place to enjoy your drink. With almost 30 taproom-exclusive brews, you are guaranteed to find a beer that suits your palate. This brewery does have a few light snacks, but you can also bring in your own food.

Other Beer Highlights in Louisville, KY (Bars, Stores, and Fests– Oh My!)

Even if you have time to check out all of the above breweries, there’s no way you will run out of beer-related things to do in Louisville. Check out the highlights below if you’re looking for even more beer attractions in Louisville, like bars, stores, and events!

While the Tailspin Ale Fest is typically held in the springtime, I was there in the fall when it happened to be rescheduled due to Covid. Despite the chilly and windy day, this beer fest was so much fun, and my beer friends had a great time, too!

This festival typically has activities like a silent disco, live music, photo booths, and a cigar lounge, so it is a really fun time. It also provides different specialty bar areas, like a bourbon beer bar and a sour bar. You can learn more about the drinks and festivities of the next Ale Fest here!

Where to Stay in Louisville

The AC Hotel Louisville Downtown was kind enough to host my stay while I was exploring Kentucky. This hotel is located in NuLu, the East Market District of Downtown, where you can find tons of local art galleries, boutiques, and restaurants.

I personally loved staying at the AC Hotel. My room had an incredibly comfortable bed (that made it really hard to get up in the morning!) and an ultra-luxurious bathroom. The onsite bar was extremely convenient, serving Spanish wines, microbrews, and handcrafted cocktails.

This hotel also has an onsite fitness center, free WiFi, and flatscreen TVs in every room. Prices average about $150 per night, depending on the time of year and availability.

Looking for More Help Planning Your Beercation? Check Out These Guides!

This might have been my first-ever visit to Louisville, but I have already fallen in love with this city. With so many incredible Louisville breweries and beer hangouts, I can’t wait to go back! If you are looking for other local breweries, new breweries to visit, or vacation destinations for beer lovers, check out the guides below!