Breweries to Visit and Things to Do in Marble Falls 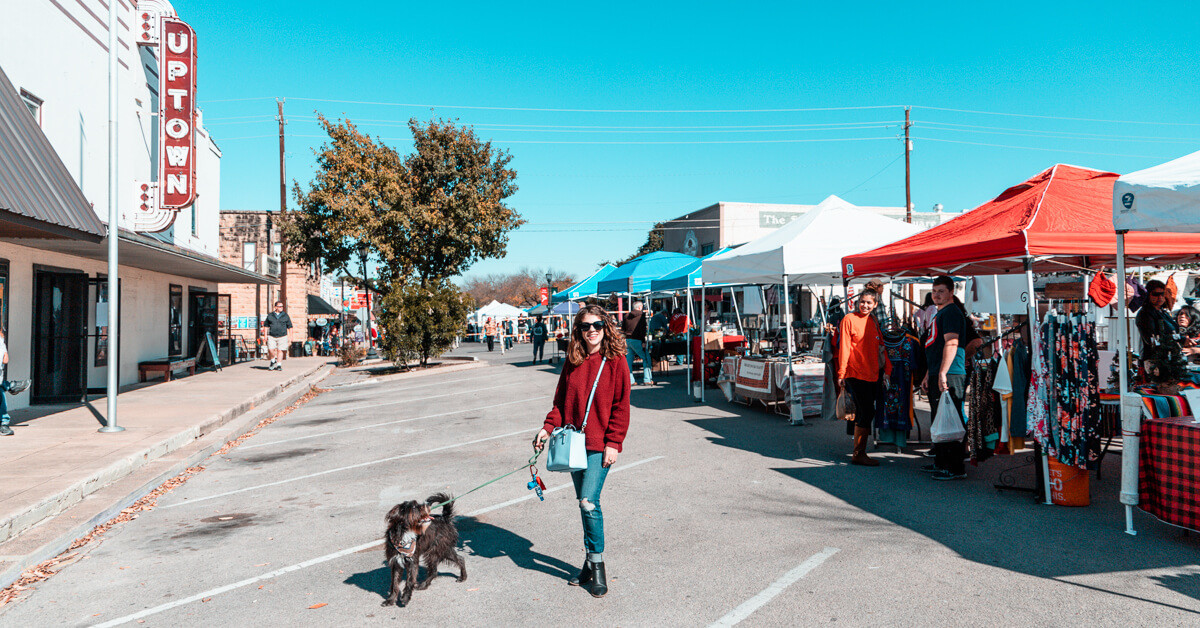 This post was created in collaboration with Marble Falls. All opinions and ideas expressed are my own. Thank you for supporting the companies that support this blog!

Marble Falls has been on my “To Visit” list for embarrassingly way too long. It’s only a quick hour drive Northwest of Austin… Maybe that’s the part I’m embarrassed about. Marble Falls is the perfect little Hill Country town to plan your next daycation or overnight escape. The drive is short, but it’s insane how much the scenery changes in just an hour. Just one of the incredible things about Texas.

In Case Ya Didn’t Know: Marble Falls is a city in Burnet County, Texas, United States. As of the 2010 United States Census, the city population was 6,077. It is about 38 miles northwest of downtown Austin and 85 miles north of San Antonio. It’s home to the legendary BEAR KING… More on that later….

We started our day in historic Downtown Marble Falls at the Market Day on Main. It’s a seasonal event that showcases all the great makers and creators around Hill Country. Like, what a great introduction Marble Falls though!

I did some Christmas shopping, buying a few gemstones to embellish jewelry boxes for some of my friends. It was a couple blocks of edible and artisan goods.

We came hungry, so after walking and shopping around downtown Marble Falls, we worked up a big ole appetite (for craft beer, let’s be real).

Luckily, there was plenty to eat and drink within walking distance of the historic downtown area.

Who Should Visit Marble Falls?

SIDE NOTE: Like legit, when my sister, who lives in Virginia, first came to Texas, it was to see me in Austin. She told me she wanted to take a scenic drive to see `Texas things’. UM OK…LMAO, I didn’t get to take her on this drive unfortunately, but I think this was exactly the type of drive she was looking for.

Of course, the main reason I’ve been wanting to visit Marble Falls for so long, is to explore their breweries. I’ve been all around this state to visit breweries, and I got to visit SO STINKING MANY during my Texas Brewery Road Trip earlier this year.

But sadly, I didn’t get to visit Marble Falls then. So now was my time to shine!

If you’re looking for breweries in Marble Falls, here’s what you need to know…

Family-owned brewery with food and a large, covered dog-friendly patio.

The newest brewery in Marble Falls is Bear King Brewing Company, named after a mysterious creature that “stalked the outskirts” of Marble Falls. Some say it was half-man, half-bear…

Others claim it was just a bear or simply a man. Either way, the myth of the Bear King stuck. And for Bear King, it’s stories like these that inspire their brewing.

We had a great time here, so much so that we went twice…. The food was incredible, and so were the brews.  A lot of solid brews in the tap menu, so you know there will be something for everyone.

My Recommendations: Wandering Blonde, a lightly citrus blonde ale and their Truffle Fries (tied with the Embellished Nachos for my favorite dish) were the best fries I think I’ve ever done had.

Double Horn Brewing Company is just a short walk from Bear King Brewery in Marble Falls. There are a couple antique stores between the two, if you want to make a shopping pit stop… I know I always do!

While Double Horn had a small selection of beers, their Pale Ale and Brown were heavenly and more than made up for it. The food menu is small too, but for good reason!

All food is made from scratch and prepared to order. We had several dishes and enjoyed it all, especially the burger and pot-stickers served with Thai Chili sauce. SO MUCH YUM.

Save the World Brewing →

Established in 2012, Save the World Brewing is a 100% philanthropic brewery in Marble Falls that specializes in Belgian-style ales.

I’m not going to play favorites here, so I won’t say what I want to say. :) But seriously though, Save the World is an incredible brewery.

Not just for the complex Belgian ales they are known for, but because they are operating as a 100% philanthropic brewery. They are living their name and doing it so well.

In 2012, husband and wife team, Dave and Quynh Rathkamp, decided to swap their jobs as physicians to open Save the World Brewery.

The brewery has a very small indoor taproom, but there is plenty of space outside (most of it covered in shade) for you and the whole crew, furbabies included.

Tip: Save the World Brewery isn’t open on Sundays, so if you’re looking to do a day trip on the weekend to Marble Falls, plan accordingly.

Where to Stay in Marble Falls

So we came up to Marble Falls during the holiday season which means we got to partake in Marble Falls’ Walkway of Lights. It’s a free event that’s been around since 1991.

It was such a sweet little Christmas walk and was (thankfully) not overcrowded like Austin’s Trail of Lights.

My favorite part was the location is right next to Lake Marble Falls. And I tell you what! Ain’t nothing prettier than Christmas lights twinkling on the water.

When we were at the Walkway of Lights, I kept looking across the lake to see if I could see our puppies back at our room at the La Quinta Inn Hotel.

I heard that this was the best La Quinta in the country, and I was excited to see what exactly that meant. Well I can now tell you, it was a few combinations of things that made this hotel spectacular.

The main thing that makes it the best, has got to be the view. OMG the view!! And luckily the room had balconies, so we got a lovely Texas Hill Country sunset against Lake Marble Falls right from the comfort of our hotel room. Yea, it was just as lovely as it sounds.

The staff were so nice and friendly, and the rooms were in great shape. Best of all, they were dog-friendly for BOTH of our pups.

Have You Been to Marble Falls?

All in all, this trip was a blast. It might have been my first trip to Marble Falls, it most certainly will not be the last. Thanks for having me!

Let me know in the comments your favorite place in Marble Falls!

10 Best Things to Do in Frisco, Tx

Top 5 Things To Do in Miami – Miami Travel Guide