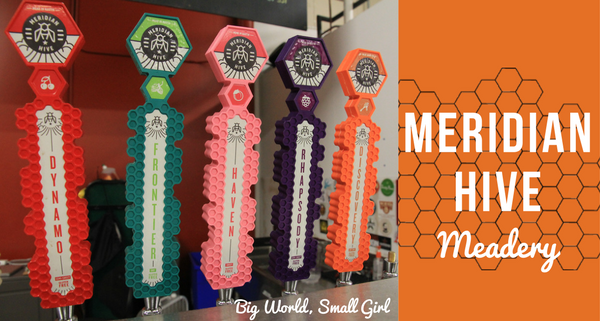 Meridian Hive is Austin’s first (and only) meadery and they’re a refreshing addition to this city of Craft Beer drinkers. They are leading a reinvention of mead and pushing boundaries with their carbonated mead and barrel aged stills.

My recent visit with Angi, Meridian Hive Brand Manager, was a blast and super-educational. She was more than happy to give me a complete tasting while she explained the process, ingredients, and how the founders decided on mead.

Let’s start with the basics: Mead is made by fermenting honey with water and also believed to be the world’s oldest alcoholic drink. The process is closer to wine making but much like cider or sake, mead really deserves to be in a category of its own. 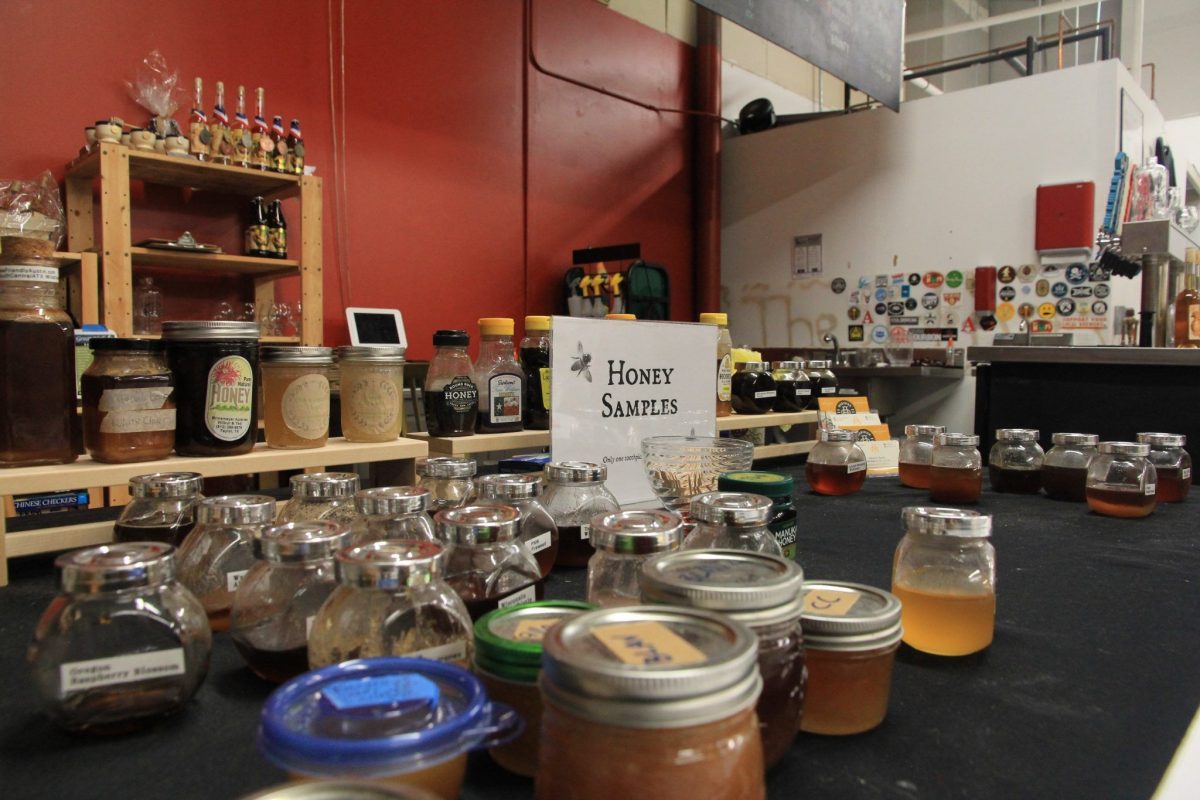 Meridian Hive’s table of honey samples from all over the country. People have sent them in, or found one interesting to share, or it’s one that they use in the mead you’re drinking!

Cideries and Meaderies, Meridian included, are classified by TABC as a winery. Half of the fermentable sugars used to create mead come from honey while breweries use grain as the source of their fermentables.

Again, similar to wine, mead is created in a variety of sweetness, from bone dry to sweet like a dessert wine. Mead can also be still or carbonated.

Like beer, mead can be flavored with fruits, spices, or hops. Though the alcohol level is typically higher in mead than beer.

Most notably though, mead is beginning to have its moment in the United States. The number of US meaderies has doubled in the last three years! Which is perfect for all the craft beer drinkers looking to explore and enjoy a new taste. And that’s how I think Meridian Hive gained a solid reputation in their home market.

Mike Simmons and Eric Lowe first started talking about opening a place back in the early 2000’s after meeting through an Austin homebrew club. The two knew that they wanted to do something different, even before the big craft beer boom.

With Mike wanting to start a brewery and Eric, a vintner as well, wanting to create an urban winery, they had to meet in the middle. And in 2012, they began building Meridian Hive and scaling their hobby into a commerical meadery in Austin.

Every year since, Meridian has done well in the Commercial Division of The Mazer Cup International annual mead competition. Just this year, Meridian Hive took home an incredible five awards, one of which was a Gold Medal for their Meadowfoam.

The new labels featuring Meridian’s both the bottles & cans

Besides winning some impressive awards, Angi filled me in on the rest of The Hive’s big year: they celebrated an expansion to Dallas, started canning their draft meads, and had the release of their first barrel-aged mead, Bounty.

All this happened right as they began rebranding logos and labels in August.

Angi went on to say that they’re creating new labels and logos to match their modern tap handles. Other than their canned meads, Bounty is their first bottled mead with the new rebranding.

I think the new labels perfectly capture the modern feel they were going for and it’s sure to stand out on shelves.

Meridian plans to keep up the growth through 2017 with an expansion to Houston and by working their way into mead and bottle shops around the country. Until then, you can buy their mead online!

Throughout Austin Meridian Hive’s mead is easy to find in stores and on-tap, but it’s a limited selection. Their taproom over east, is where you need to visit for their special releases that change often. It’s a small taproom, and it’s one that they’re quickly (and excited to be) outgrowing! 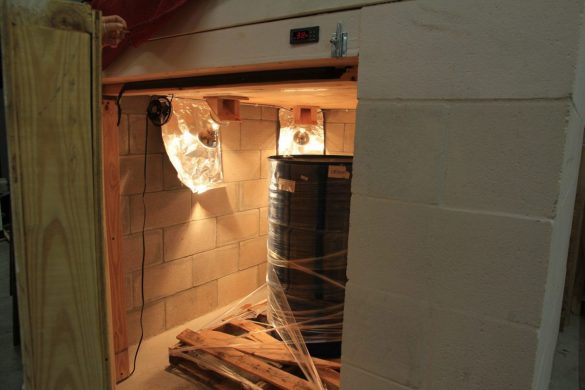 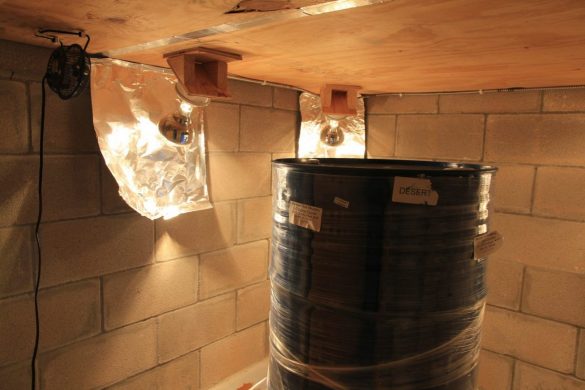 Hidden in Meridian Hive’s taproom is this little closet that keeps the honey cozy and warm for when it comes time to mix with water. 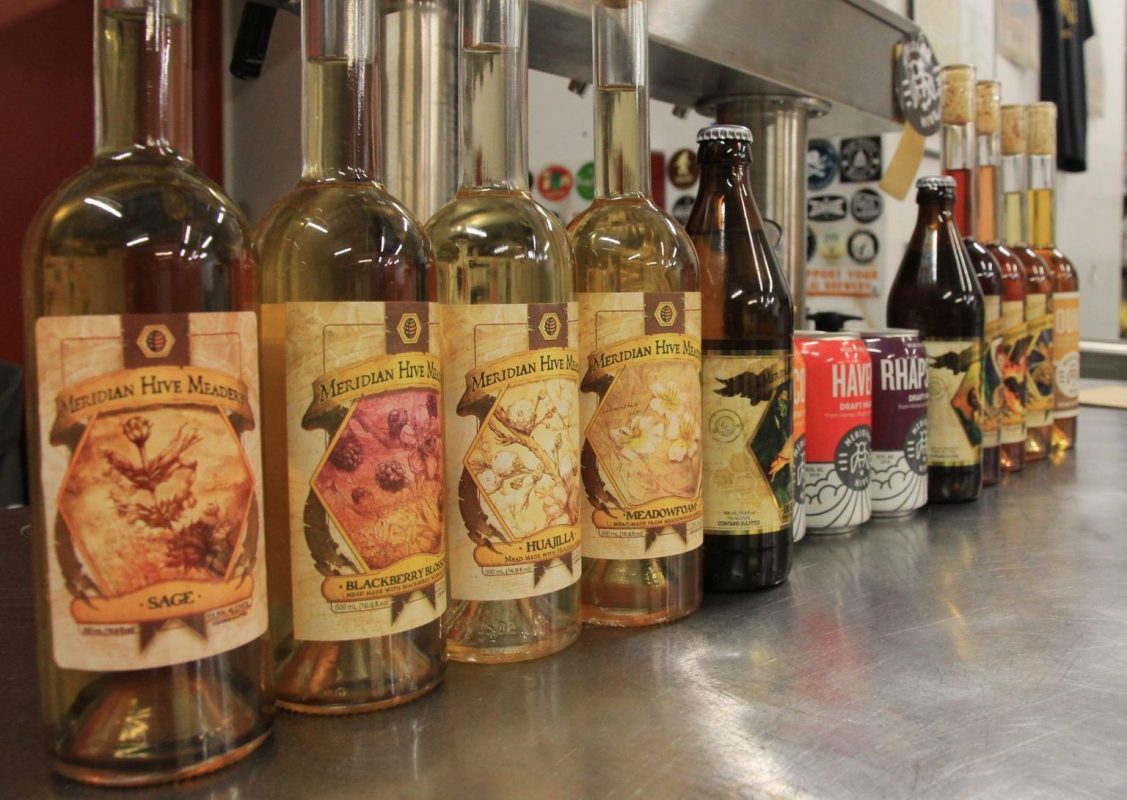 At the time of my visit, Meridian Hive had an extensive range of 18 meads for me to taste, including three pilot drafts. But they’ve organized them into three basic categories:

Angi started off my tasting with Meridian’s Carbonated Draft Meads:

There is a lot less honey in the carbonated meads than the traditional stuff.  She pointed out that with mead, just because there is more honey in the batch, it doesn’t mean it’s sweeter. In mead-making, more sugar means more alcohol.

If you’ve never had mead before, or you’re not a big honey fan, give these carbonated meads a chance!

Next up were the Traditional Stills:

Traditional in every sense of the word, these meads use just single blossom honey, water, and yeast to showcase the honey’s complex profile. More wine-like than the carbonated meads, they range from dry to sweet with the flavor being all honey. 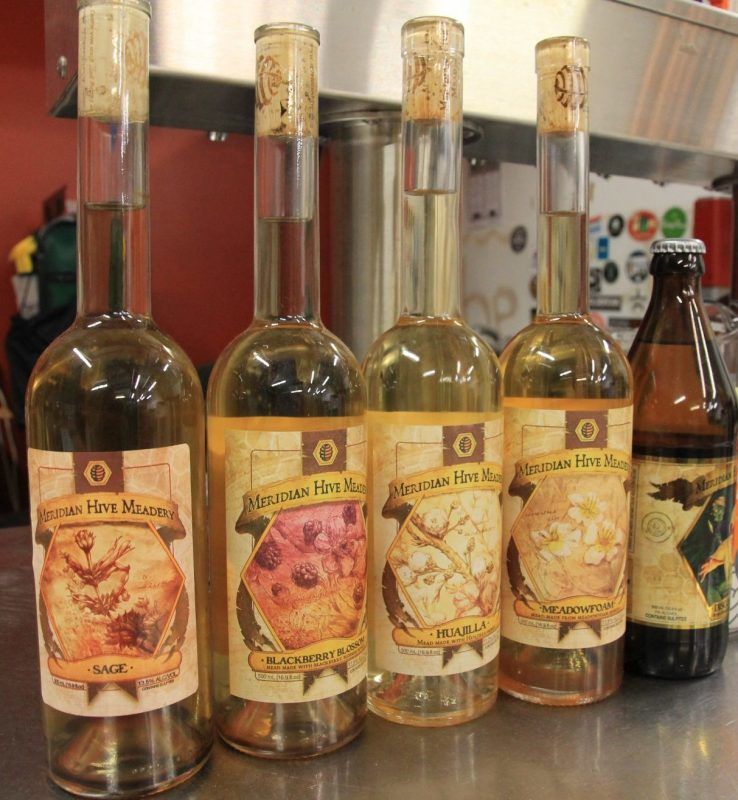 Finally, it was time for the Specialty Stills!

Meridian Hive takes traditional mead to the next level with added herbs, spices, fruits, and botanical ingredients. Each of their Speciality Stills are carefully formulated to bring out the honey character while balancing the additional flavors.

When you first walk into Meridian Hive’s taproom, the large table of glass jars and bottles in every shade of amber and gold will be one of the first things to catch your attention. It shows just how seriously honey is taken at this meadery!

It’s taken seriously for a huge reason though. Basically the honey used determines the overarching flavor of the mead and varies according to a honey bee’s particular diet of nectar and pollen. This is a great example of why Meridian Hive is unable to use wildflower honey: there isn’t enough control and consistency with the flavor.

It’s hard to describe the experience of tasting a mead with its honey, but none of it tasted similar to one another. And between the mead and the honeys, it was a weird parallel in the tastes, tricky to put your finger on.

There were more fragrant honeys, and super sweet honeys, but my favorites were the Huajilla honey and Meadowfoam honey.

Huajilla is a shrub that grows in southern Texas. It’s very light in color and has a rich, but mild flavor. Meadowfoam honey comes from meadows and praries. It’s wildly sweet in both, smell and taste with that unique marshmellow flavor. 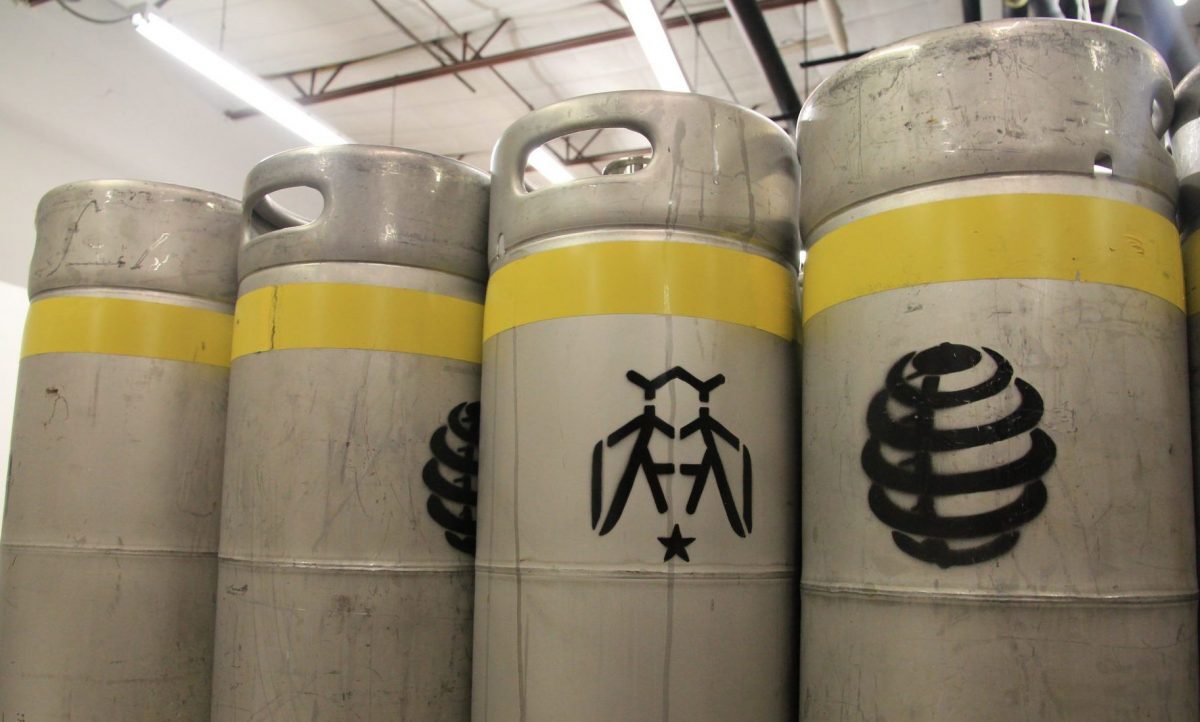 You also won’t find artificial or added sugars in Meridian Hive’s meads, all the sweetness comes from honey or natural ingredients like peach or berries.

It’s wild how different and distinct all of these meads tasted. There is a taste for everyone at Meridian so, it might feel overwhelming on your first visit or two but just ask for some guidance! The Hive is more than happy to talk honey and mead.

Subscribe and like my Facebook Page to stay up-to-date with all my Big World, Small Girl interviews, brewery guides, giveaways, and other fun Craft Beer experiences in Austin.

Jester King Figlet Review: A Texas Beer Greater Than the Sum of its Parts