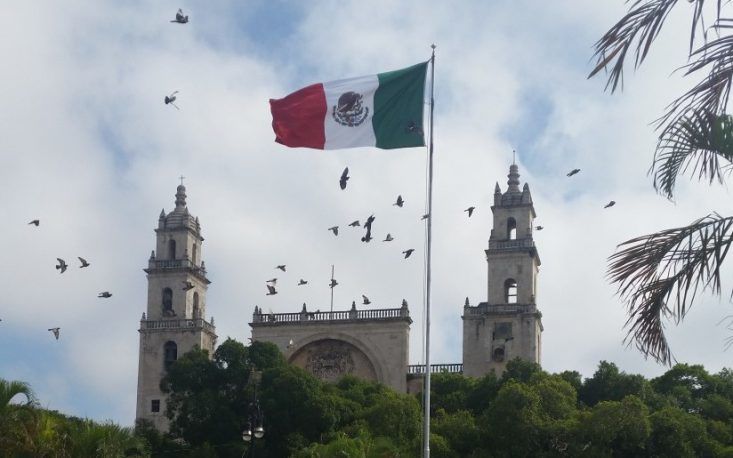 Ah Mérida, the quite but beautiful city in the northern state of Yucatán. I booked a few days in this beautiful hostel and planned on visiting Chitchen Itza while in the area.  This hostel wasn’t the most social I had been; it had a curfew and a rule of no liquor, just beer and wine.  It had me worried a bit, especially since I had just left all my of traveling group in Cancun.  I did enjoy the downtime after the crazy party scene in Cancun but it did get lonely being by myself during the day. I felt that I missed out on seeing a lot.

I spent New Year’s Eve here and as the day was approaching I was getting antsy that it would be a bust on the basis that this hostel was very un-social. I was very pleasantly surprised when the night finally came.  The hostel lifted their curfew and no liquor rule! It was a really great night spent with the other people in the hostel. When midnight came we did many different traditions from other countries. My favorite was when we jumped off chairs to symbolize “jumping into” the New Year. Many people also jumped in the pool as if to one-up the most common way and ensure that their year would be full of adventure and exciting moments.

The stunning pool at my hostel, I spent many hours reading and relaxing in those hammocks

The hostel had plants growing everywhere!

A colorful street typical of Merida

A hallway filled with rock sculptures near the Plaza de Armas

Plaza de Armas and the main cathedral. I loved grabbing some friends, a bottle of tequila, and some juice and spending hours hanging out here at night.

I arranged a tour through my hostel in Mérida that picked me and another girl up and took us on a day full of adventure. Not only did we see the Chichen Itza site but we went to a buffet dinner with entertainment and saw the nearby cenote.

After visiting, I can completely understand why Chichen Itza was voted as one of the New Seven Wonders of the World. It was hot, there was no shade, and the site was large, but the stories and impact of the civilization that used to inhabit here was absorbing. I’m very happy I paid a little extra to schedule a tour guide to walk me through the site. He was absolutely amazing and thoroughly described the mysterious history of the Mayan civilization.

Something interesting that caught my eye while in Yucatan state (and even comparing between all of the states of Mexico I visited) was how physically different the people looked than in Quintana Roo (the state I was in previously with Cancun).  The people in the Yucatan state are still vastly isolated from the rest of Mexico. Basically, that means that many in this area have large amounts of Mayan in them.  It was all easy to see; the people of Yucatan were incredibly short, darker skin, flatter noses, and generally heavy-set.  It is very interesting as many indigneous tribes all over the world are generally shorter. Seeing the Mayans still living in Mexico was incredible and I really treasured observing that while in this area.

Mayan ball court, see those tiny hoops high up halfway down the court? The players used their elbows and hips to try to send a small and heavy ball through the hoop. I am clueless how anyone could have done that

Where the important people would be watching the game

Side of the court

Side of the court

Where the winners used to be sacrificed to the gods. Yes, the winners. This was done and seen as a huge honor to yourself and your family. It was a great way

On the left side is the unrestored side but the rest of the pyramid they restored. When they found this site it was totally overtaken by jungles and vines. It was pretty interesting seeing some of the old paintings of the original site. Now it is a completely clear and flat area.

Close-up of the unrestored side

Many Mayan artisans hang out in the surrounding wooded area. It was a great time haggling with these people in Spanish. Definitely made me more confidently in speaking Spanish.

Panoramic of the site!

A smaller pyramid on the site.

We visited the cenote nearby! It was huge and I couldn’t help thinking this was where they did human sacrifices!

Kids and adults were jumping off that tall ledge into the deep cool waters, very brave!