There is literally, no other city in the world like New Orleans.

Mardi Gras, Cajun food, and French-inspired architecture are just a few of the traits that are synonymous with “The Big Easy”. Lately, the city has quietly been stepping up their craft beer game, and with 11 total breweries at the time of publication, the term “local New Orleans beer” is finally starting to take shape.

Here’s my take on my recent trip plus, a New Orleans Beer Guide for you to navigate this emerging craft beer scene. 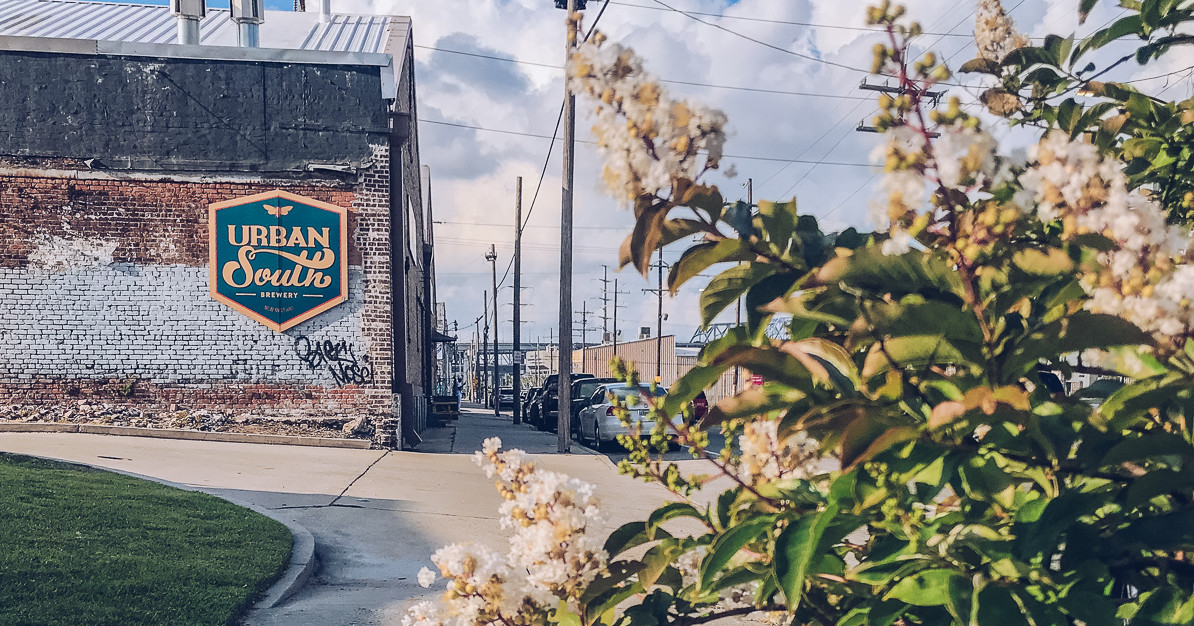 Lucky me, the craft brewery nearest to my Airbnb was Urban South, the #1 brewery y’all recommended me!

Most of you all probably know this, but in case you don’t, New Orleans allows you to drink in public. That’s why you’ll see bars offering cocktails to go, and plenty of cool kids walking around with plastic or Styrofoam cups (usually filled with blood red Hurricanes or fruity Daiquiris).

I have been to New Orleans and am very used to this, but never really considered the possibilities of craft beer. When at Brieux Carre off of Frenchmen Street, I was taken aback by hearing someone order a pint of craft beer to go. I mean I’m not hating, it just felt weird, looked weird, sounded weird.

Maybe it’s just me, but the ‘weirdness’ to me came from my usual experience of ordering a pint at a brewery. Getting to stay and enjoy that pint, gives me a moment to experience the brewery, it’s brand, it’s vibe, and all the good stuff I love about craft beer. It’s almost like I feel that craft beer is too ‘high class’ to be taken to go. Still, and let’s be honest, ordering craft beer to go is something I could get down with… Once I get used to it! 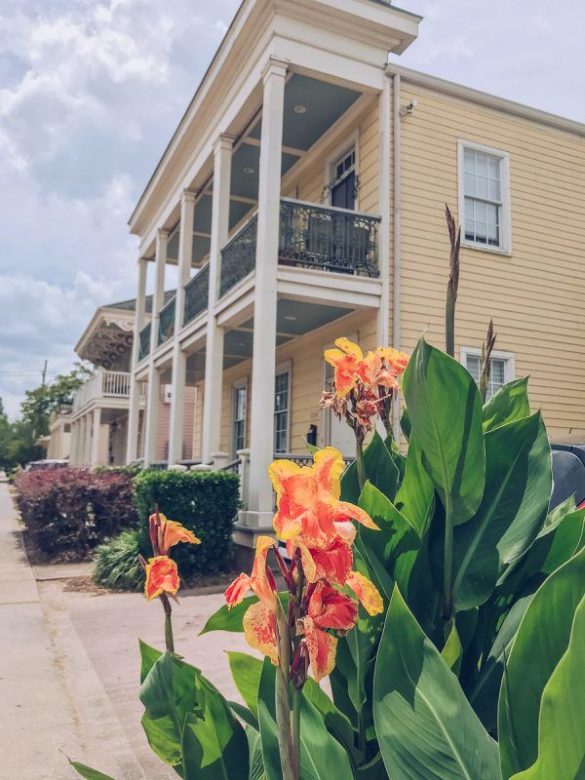 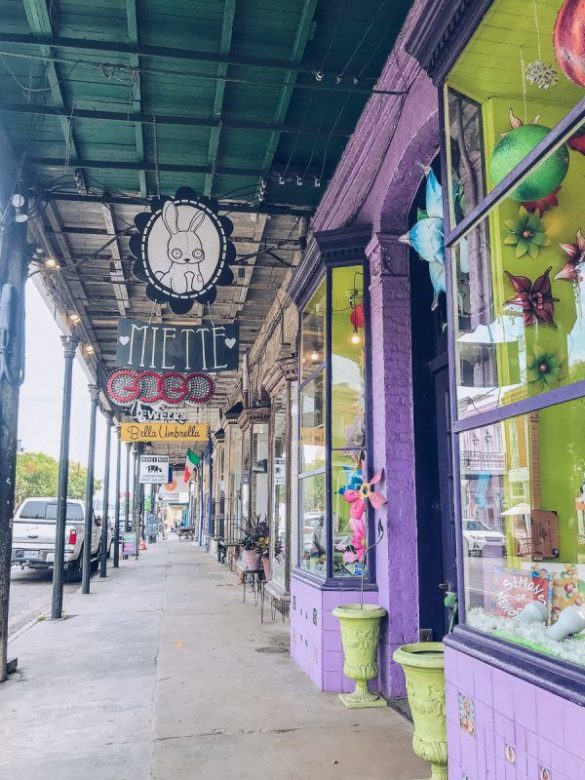 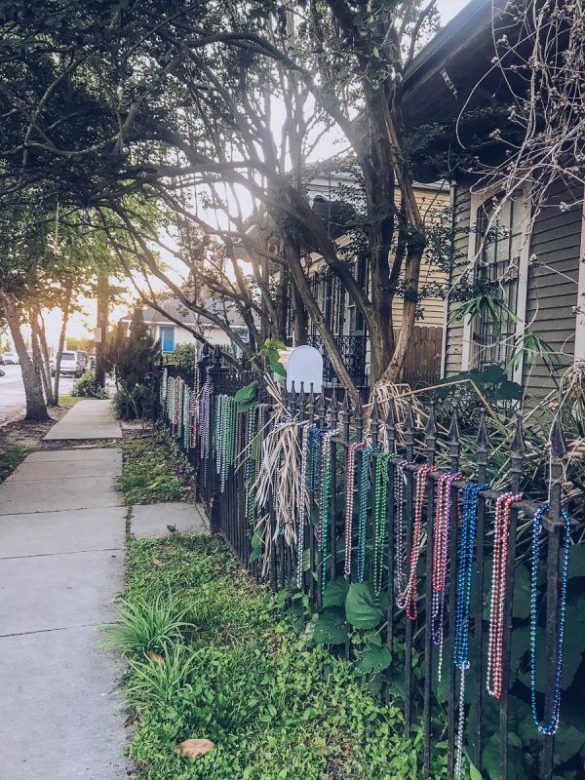 So with that being said, I’ve listed out a complete guide to New Orleans breweries. You might notice some of the breweries are lacking in details. Unfortunately those are the ones that I did not have time to visit. I will say I made a point to visit the breweries that was recommended most by my friends. Take that as you will…

But like I said earlier, New Orleans has a young craft beer scene and still has a lot of maturing to do. In my opinion, that’s pretty exciting news. Along with the 11 breweries in town, there’s a few distilleries, an incredible cidery, and plenty of beer bars to blow your mind in the way that only New Orleans could. (Which I listed out my favorites down at the bottom!) 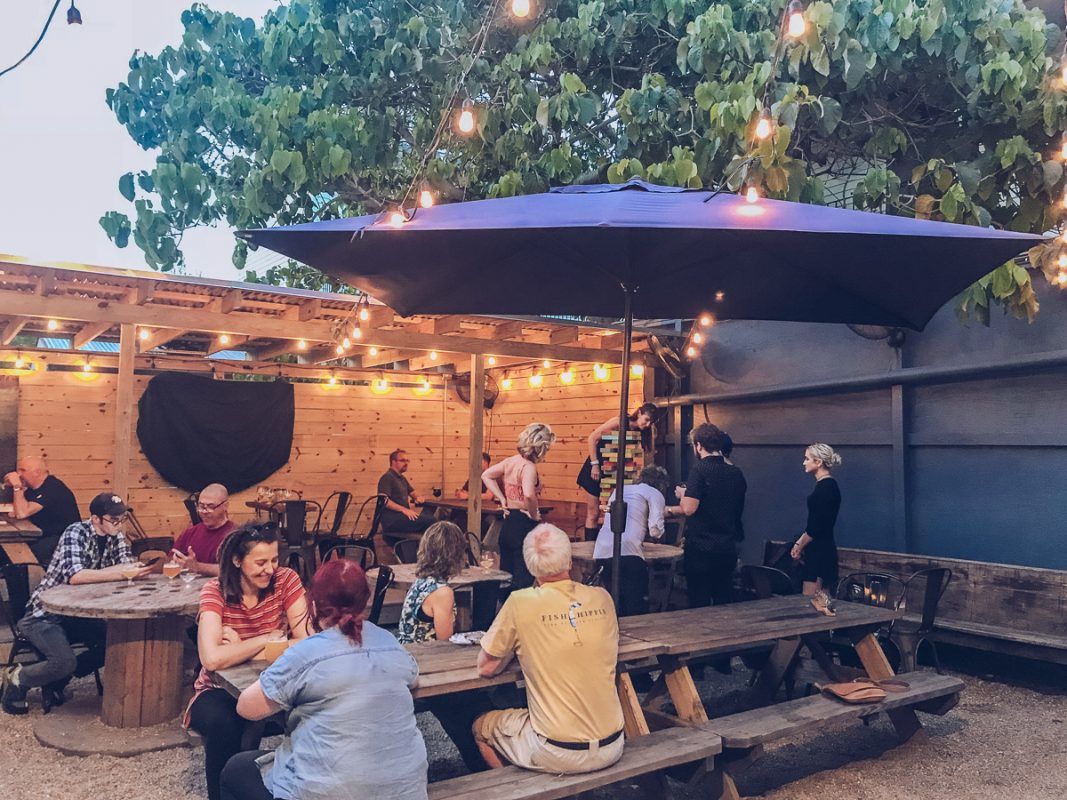 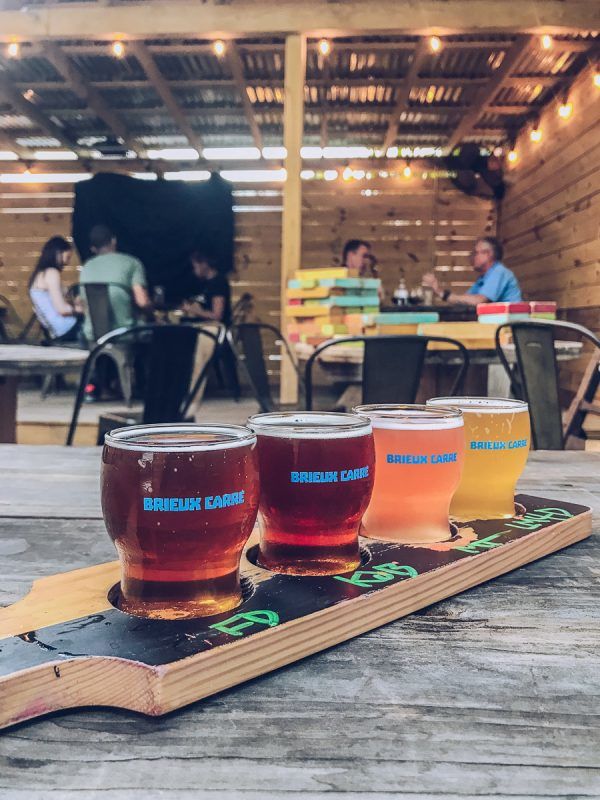 With a laissez faire approach to brewing, Brieux Carre aims to “embody the New Orleans spirit” in all of their beers. This brewery was tucked in right off of the popular Frenchmen Street, giving imbibers perfect access to craft beer. The interior of Brieux Carre in New Orleans is narrow and tight, but keep heading down the hall to get to the back courtyard for more seating.

When it comes to the beers, I really enjoyed the selection and most visitors do too. But don’t get too attached to any! Brieux Carre is always rotating and adding new beers to the board. However, the one exception to that is the “My Tart Will Go On” raspberry sour ale. I’ve got my fingers crossed for you that’ll it be on tap when you visit. I don’t even like raspberry, but in that NOLA humidity, goodness, it hits the spot.

Pro tip: Skip the raunchiness of Bourbon Street, and head to Frenchmen Street for a more authentic New Orleans night out! 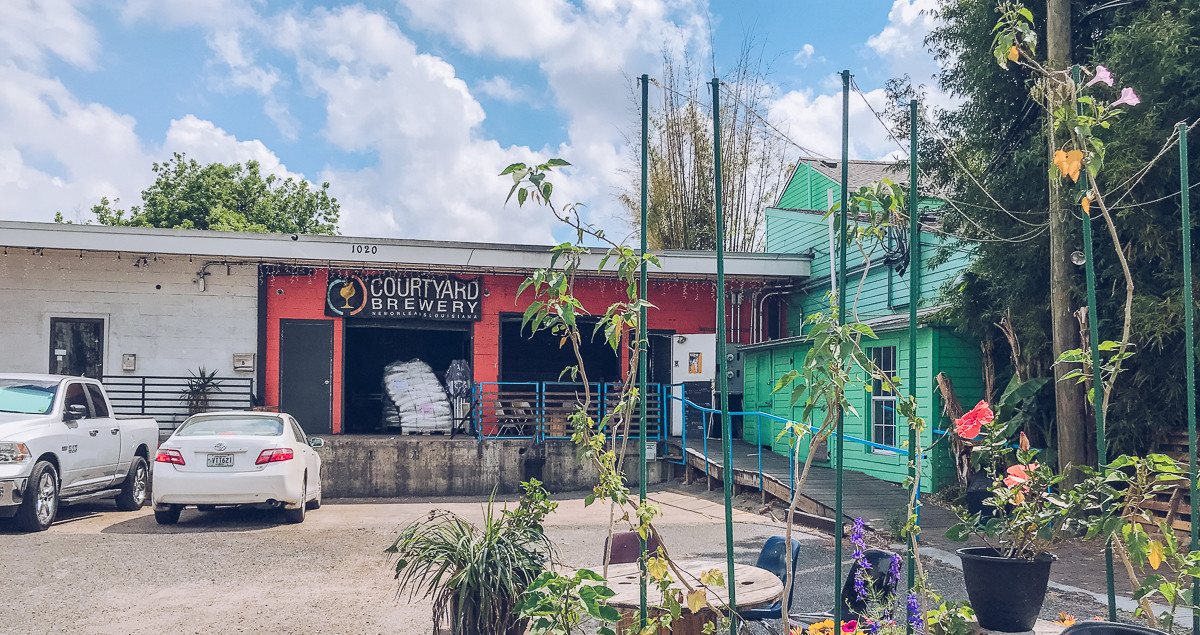 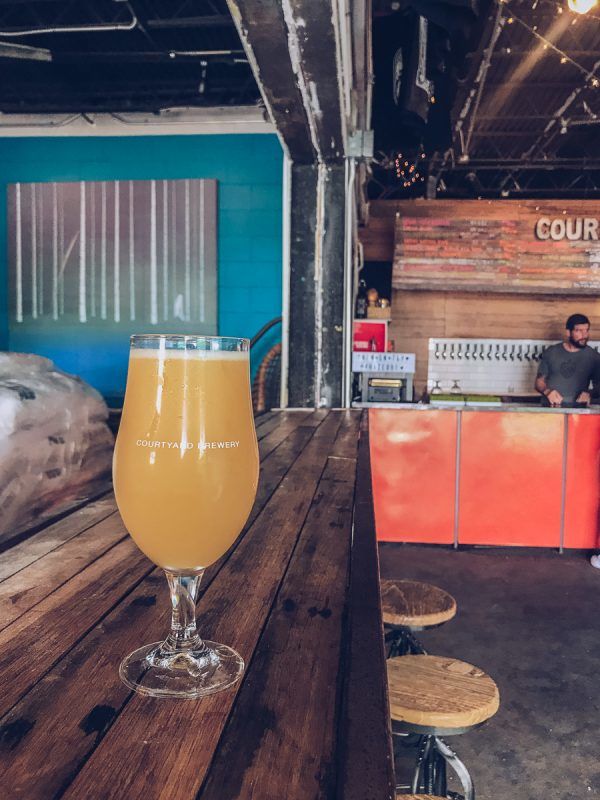 Courtyard Brewery was one of two breweries in New Orleans that everyone said I must visit. This New Orleans brewery had a humble 3-barrel brewing system along with a funky taproom and friendly staff. But I don’t think that’s why it was so heavily recommended to me; it had to have been the IPAs.

The beer board is a mix of Courtyard brews and guest taps, but I quickly noticed most of the beers were hoppy AF. A bummer– at first… After enjoying a pint of their Prose vs. Poetry ESB (extra special / strong bitter), I knew I had to give their IPAs a chance. A huge move for me considering I stay as far from the hoppy, piney, juicy, whatever bombs as I can.

And wouldn’t ya know, Courtyard Brewing blew me away with their IPA. I let the bartender know my preference and he was pumped to help me find the style of IPA I would enjoy the most. And that’s how you know you’re at a great brewery. Sometimes I get embarrassed that I don’t like the IPAs but this dude passed ZERO JUDGEMENT. Something I wish I experienced more often in craft beer… but oh well!

So I ended my visit at Courtyard with The Color of Money (their American IPA using  Mosaic, Vic Secret, Enigma, and Denali hops) and a new excitement to get out there and explore more IPAs!

Chain hangout for house-brewed, German-style beer & a pub menu served in a casual setting. Located right across from Harrah’s Casino and within walking distance of the French Quarter. (Honestly, I’d recommend skipping over this chain brewery and saving time for more of the local brews…)

A rotating choice of small-batch beers served in an offbeat, industrial-chic bar with outdoor seats. 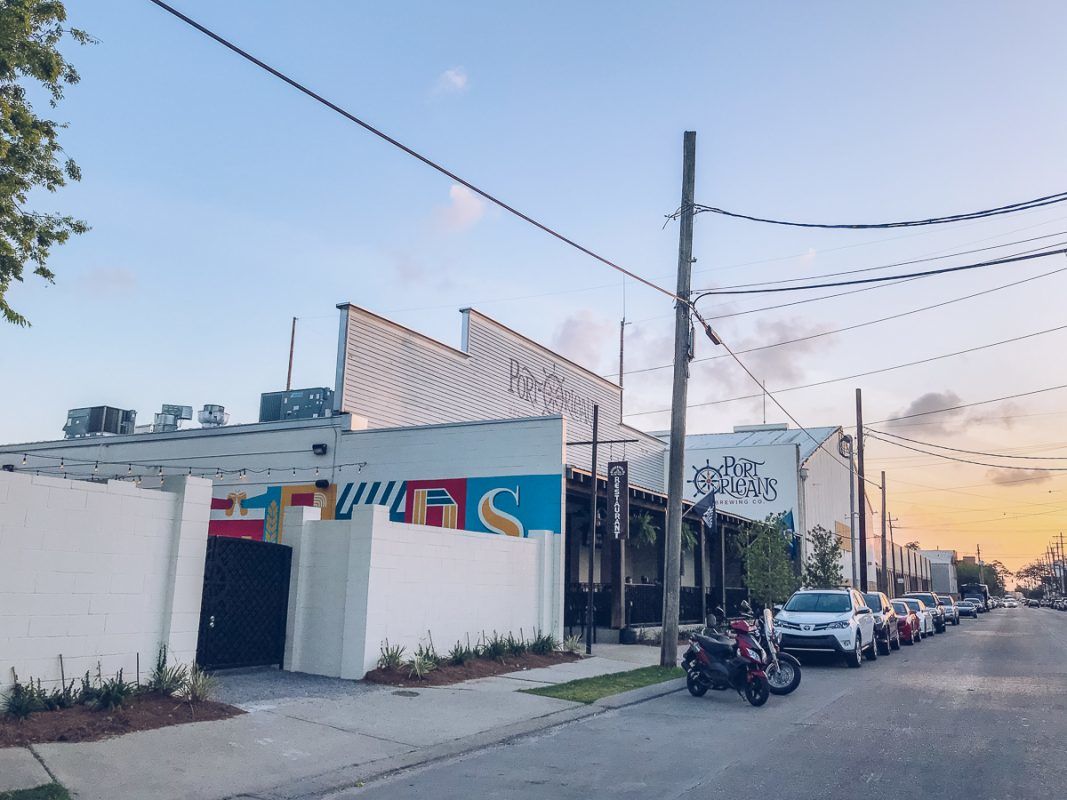 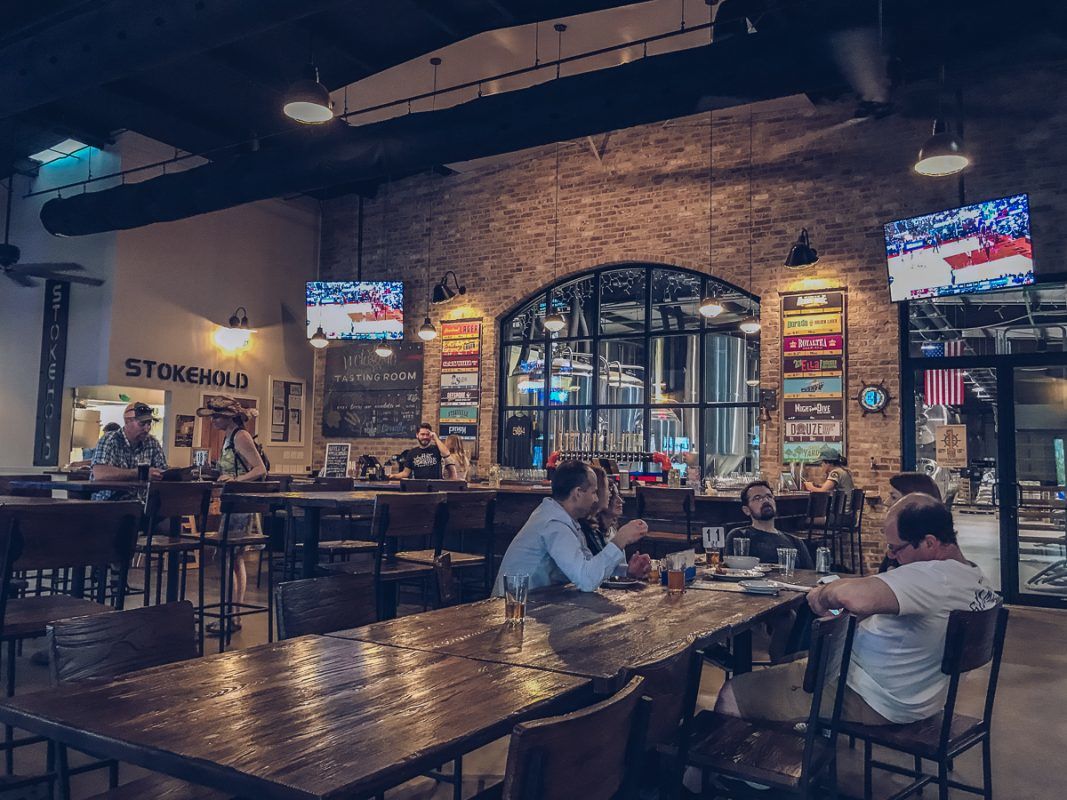 The plates are made to pair with the beers at Port Orleans Brewing’s casual taproom & adjoining brewery. Additionally, they’re just a few blocks down from NOLA’s taproom.

During my visit, there were 15 beers on tap, ranging from classic lagers to boozy and complex bourbon barrel-aged brews. Unfortunately, I came without an appetite. Which was a huge mistake on my part, once I saw their delicious and diverse food menu. Don’t make my mistake, come to this New Orleans brewery hungry (and thirsty obviously)! 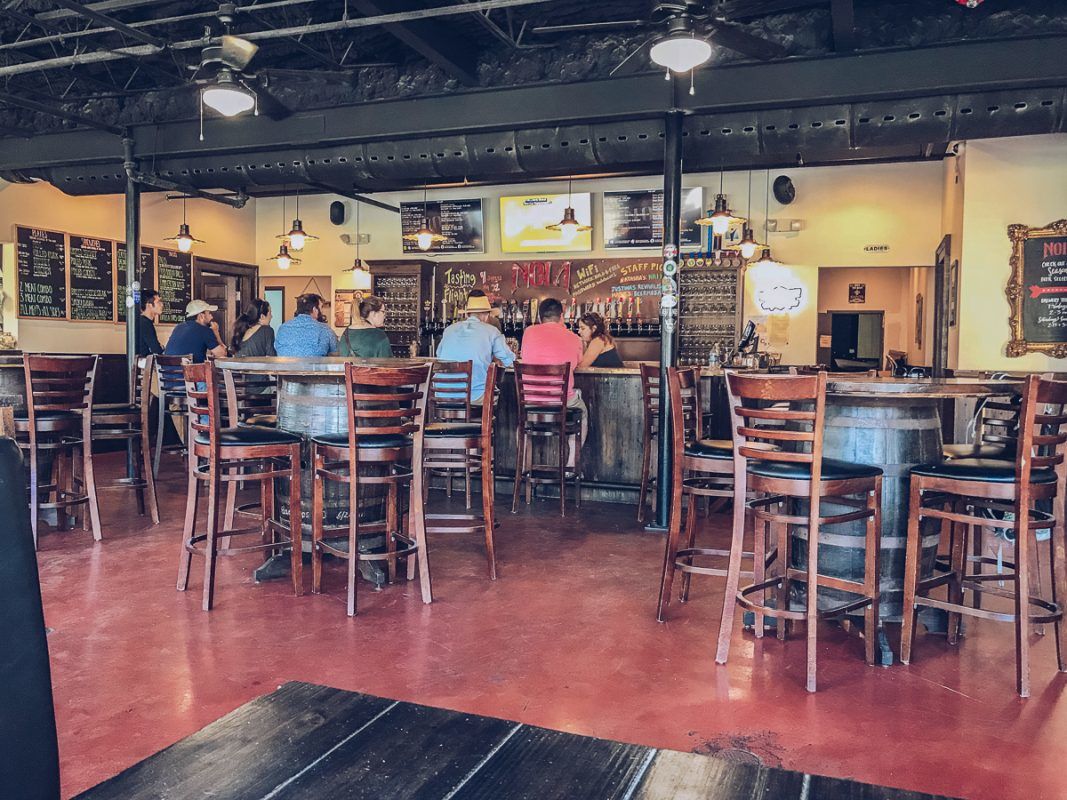 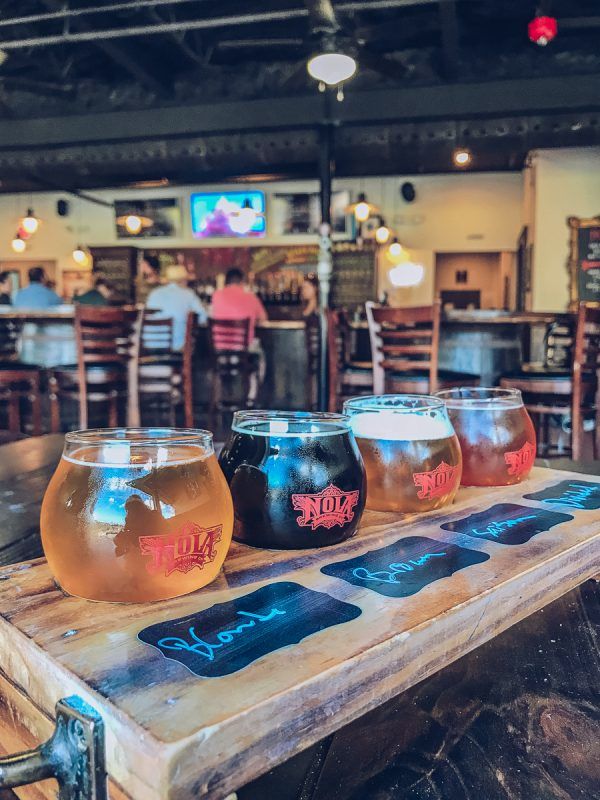 Louisiana’s largest (and New Orlean’s oldest!) independently owned craft brewery right in the heart of the Irish Channel of New Orleans. Currently, they provide nine year-round beers and several seasonals. It was such a huge selection of beer that I felt a little overwhelmed on my first visit.

Don’t worry this brewery offers flights and beer-to-go so you can experience all the great things they are brewing up! Plus, there is McClure’s BBQ on site, and if you love sauce with your BBQ, the pitmasters here will take real good care of you with style ranging from Carolina to Texas to Kansas City!

Craft brewing manufacturing facility with a taproom open on weekends.  Games are set-up around the venue including an area for kids along with a stage for live music.

Located in the Mid-City neighborhood of New Orleans, Second Line Brewing is the go-to spot for great locally brewed New Orleans craft beer in a family and pet-friendly setting. 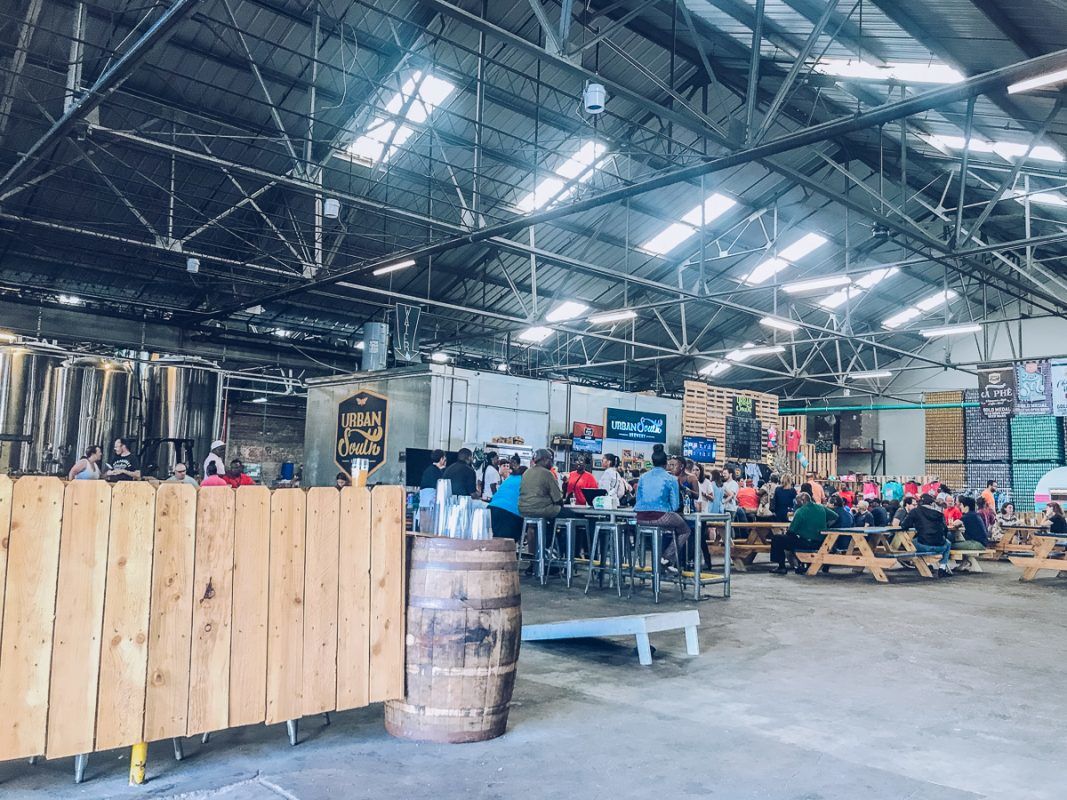 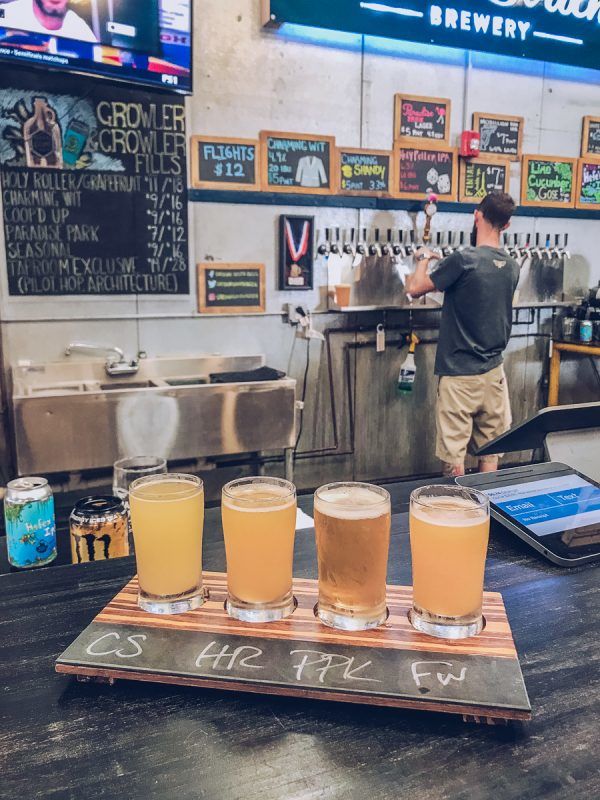 Urban South Brewery debuted in April 2016 with two flagship brews, Charming Wit and Holy Roller IPA. It didn’t take long for them to make a name for themselves thanks to the great IPAs they regularly brew. By far, this was the most recommended brewery in New Orleans and somehow I was lucky enough to book an Airbnb one block over.

This is one of those New Orleans breweries we all need to be keeping our eyes on. They strive to combine the tradition of European beer making with the “brashness” of new American styles. It’s this innovation, and a taproom large enough to fit the whole neighborhood, that makes this brewery  a standout. 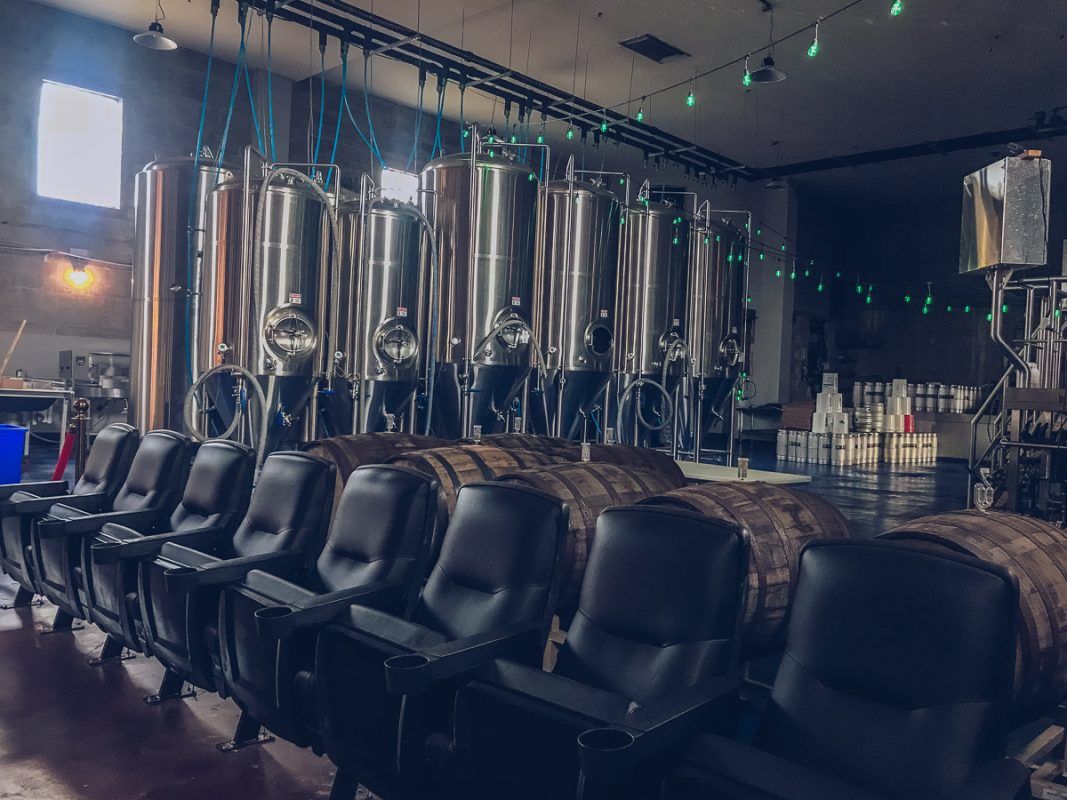 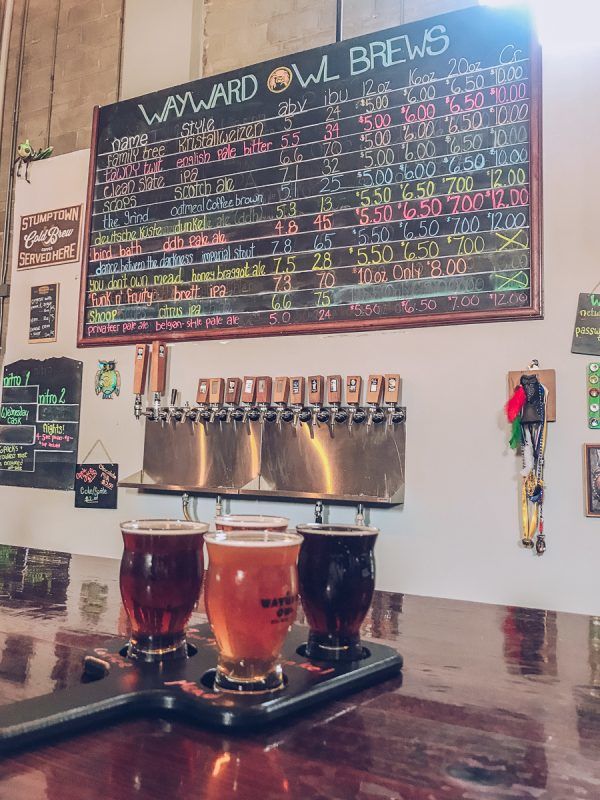 Spacious, brick-walled brewery & taproom offering a rotation of house brews in a historic theater. Justin Boswell, a previous Brewmaster at Black Raven Brewery in Seattle, restored the old historic GEM Theatre in Central City. Wayward Owl Brewing Company is one-third of the exciting Broad Street “Triangle of Craft”. (I just made that name up because they’re a stone’s throw away from a rum distillery and NOLA’s only cidery!)

A Few Other Places in New Orleans That I Loved 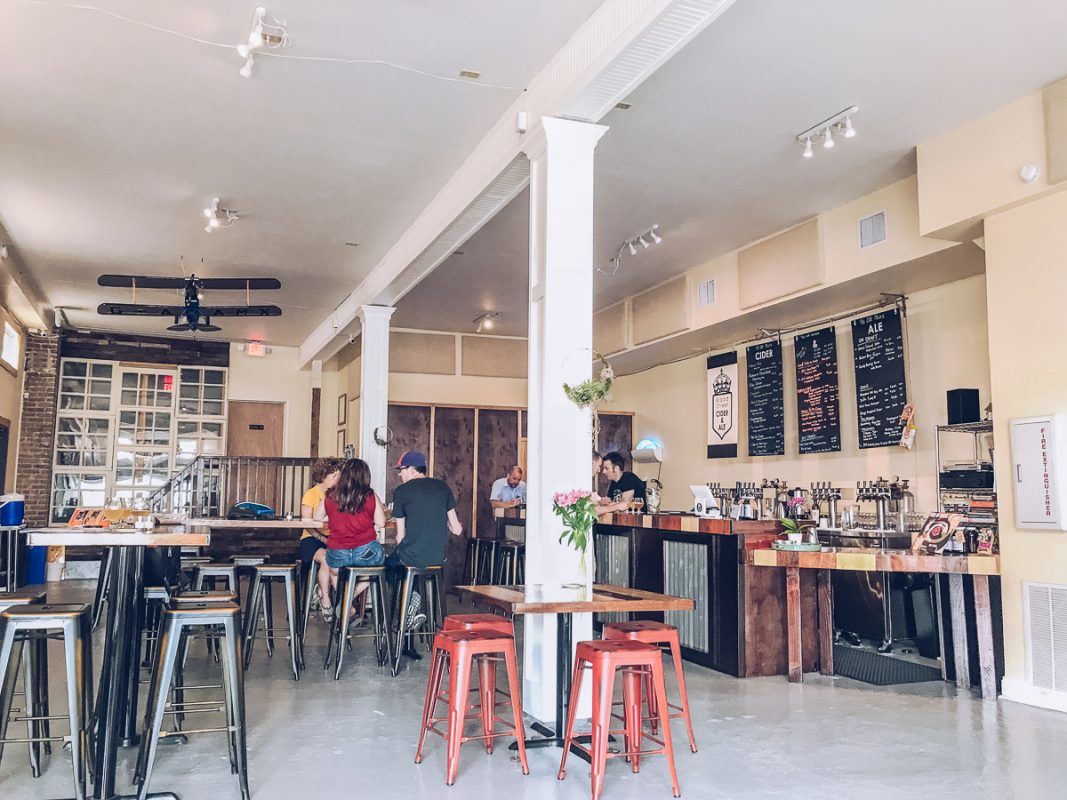 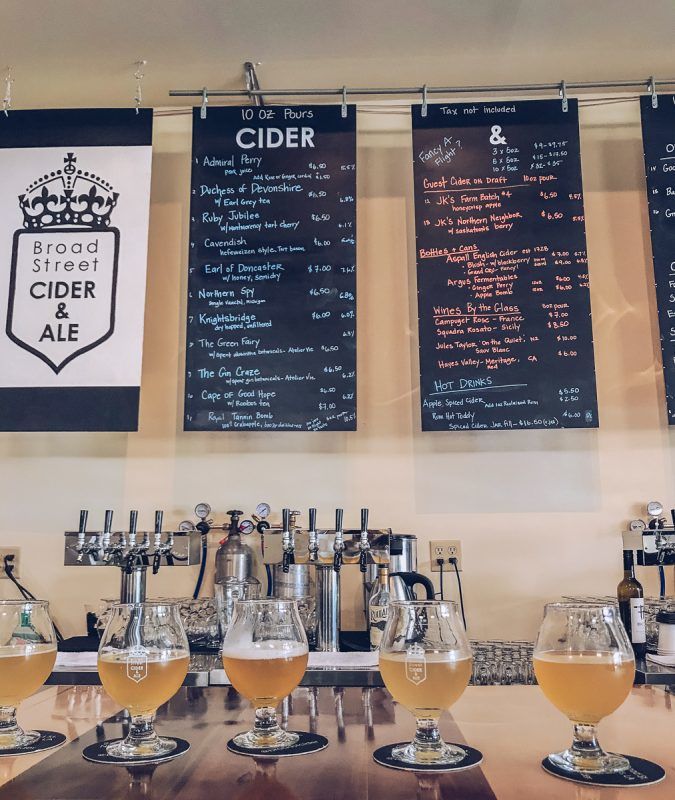 So far, Broad Street Cider is the only cidery in New Orleans. No worries though, they’re pumping out enough variety to keep visitors and locals intrigued.  When I visited there nearly a dozen ciders on tap, plus a number of guest taps. (Even some from Argus Cidery in Austin!)

If you’re a fan of dry cider, you’ll be happy to hear that’s their specialty here. By far my favorite was the Duchess of Devonshire, a cider infused with Earl Grey tea. But out of the six I tried, none left me disappointed. Whether you want a break from beer or something crisp and dry to save yourself from the humidity, come down to Broad Street Cider in New Orleans! 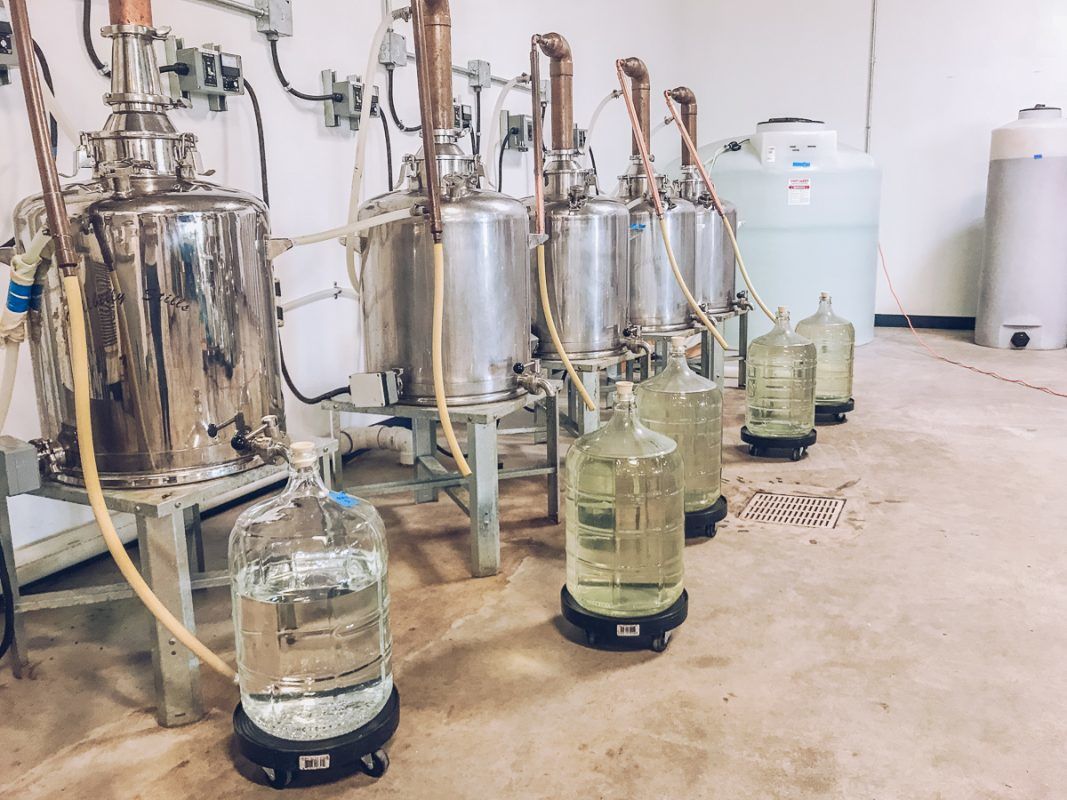 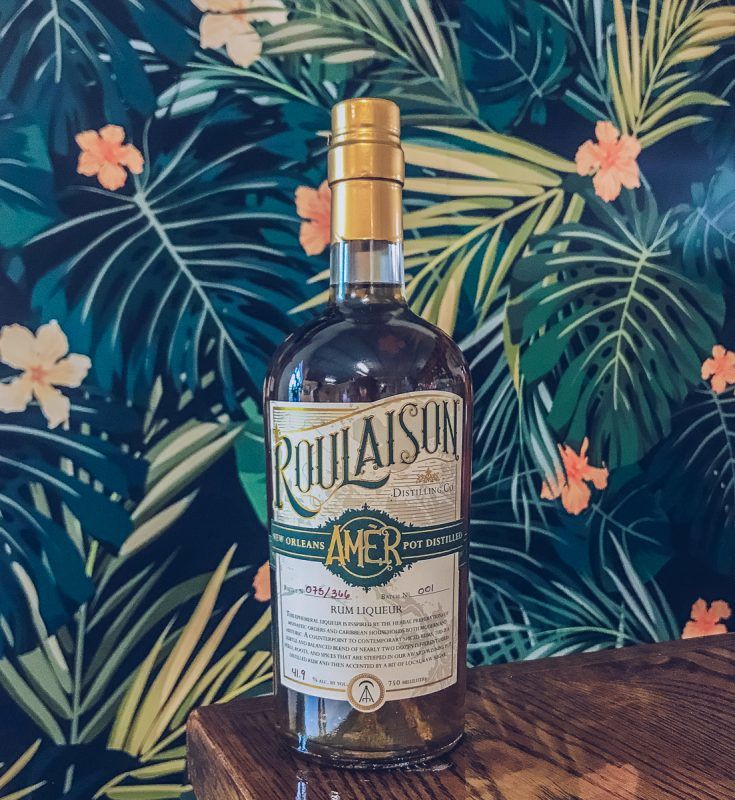 Right next door to Broad Street Cider is the new Roulaison Distilling Company. If you like rum, you’ll love these guys. After graduating from the University of Pennsylvania, Andrew Lohfeld and Patrick Hernandez moved to New York City. Just like all the best stories, after a few drinks Andrew shared his vision for starting a craft distillery with Patrick.  And Andrew felt that the culture, history, and abundance of sugar cane nearby would make New Orleans a perfect for for this venture. Patrick, a Louisiana native was “instantly sold on the idea”!

Roulaison Distilling Company in New Orleans takes a historic approach to distilling rum, using local ingredients to create robust and complex spirits. Unhindered by chill-filtration, charcoal-filtration, caramel coloring or any added flavoring, the seven rums I tried were perfect. Their award-winning rum is currently available on shelves around New Orleans and in my bar cart here in Austin. 😉 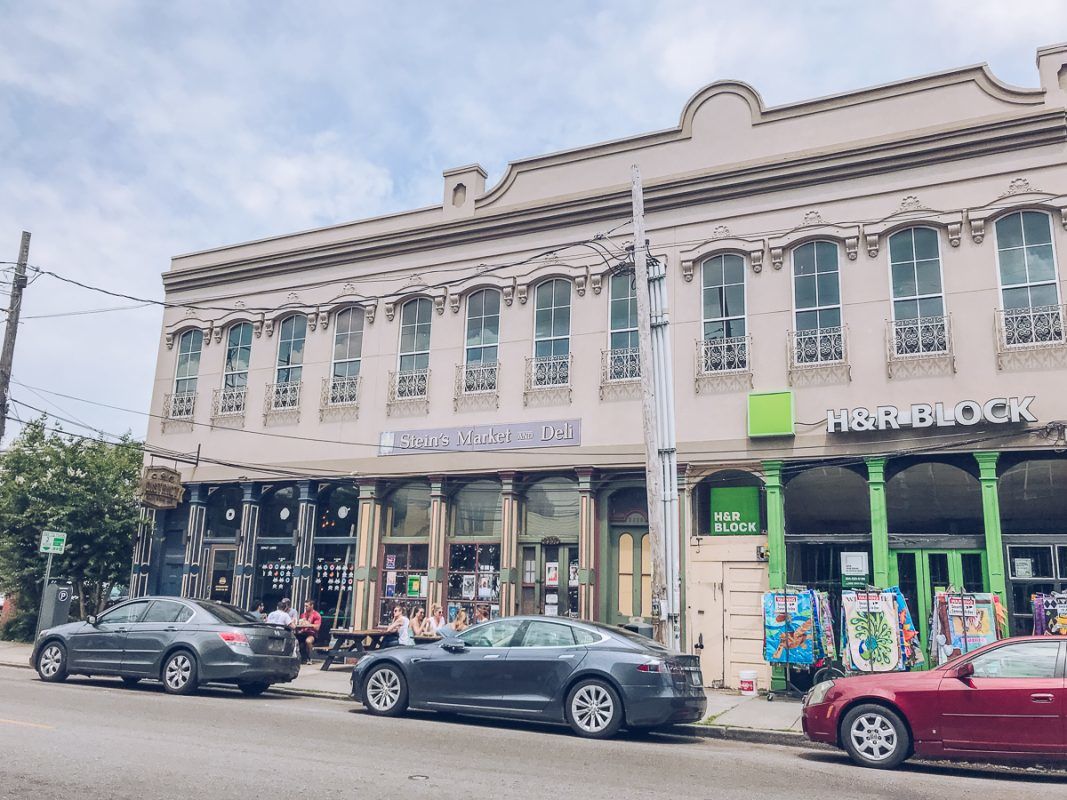 Stein’s Market & Deli is a Jewish-Italian market in New Orleans drawing crowds with specialty meats, cheeses & unique selection of brews. If you’re making a visit here, and every self-respecting craft beer lover should, plan on bringing an extra suitcase. You’ll surely need it once you see the beer cellar in this unsuspecting deli shop. 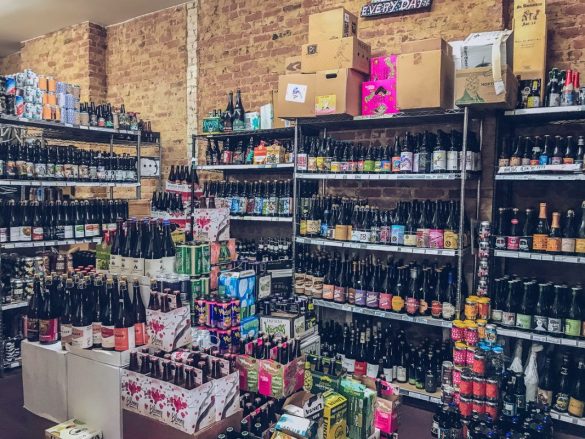 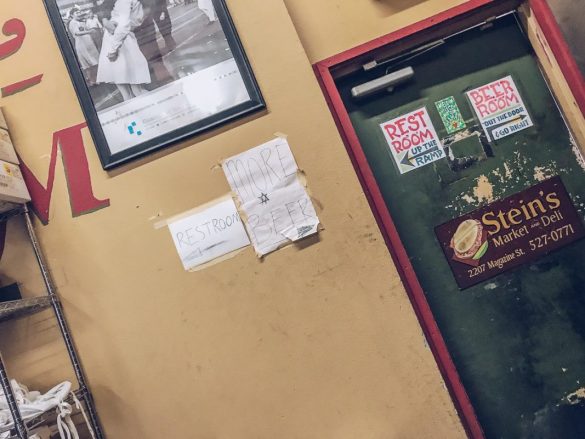 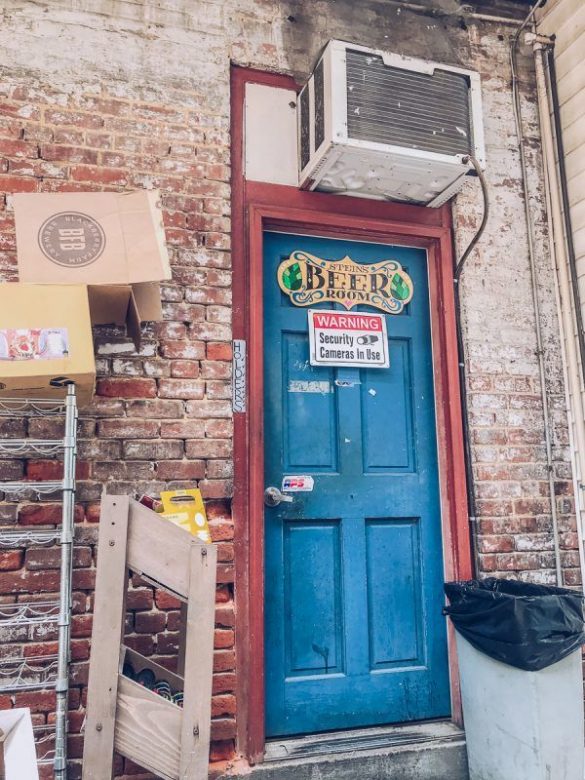 Explaining how to find this incredible cellar is a bit tricky, but just navigate to the back and follow the beer signs. You’ll probably take a wrong turn here and there, but if I can find it, you can as well. Oh, and I hear they’ve got some pretty incredible sandwiches as well… 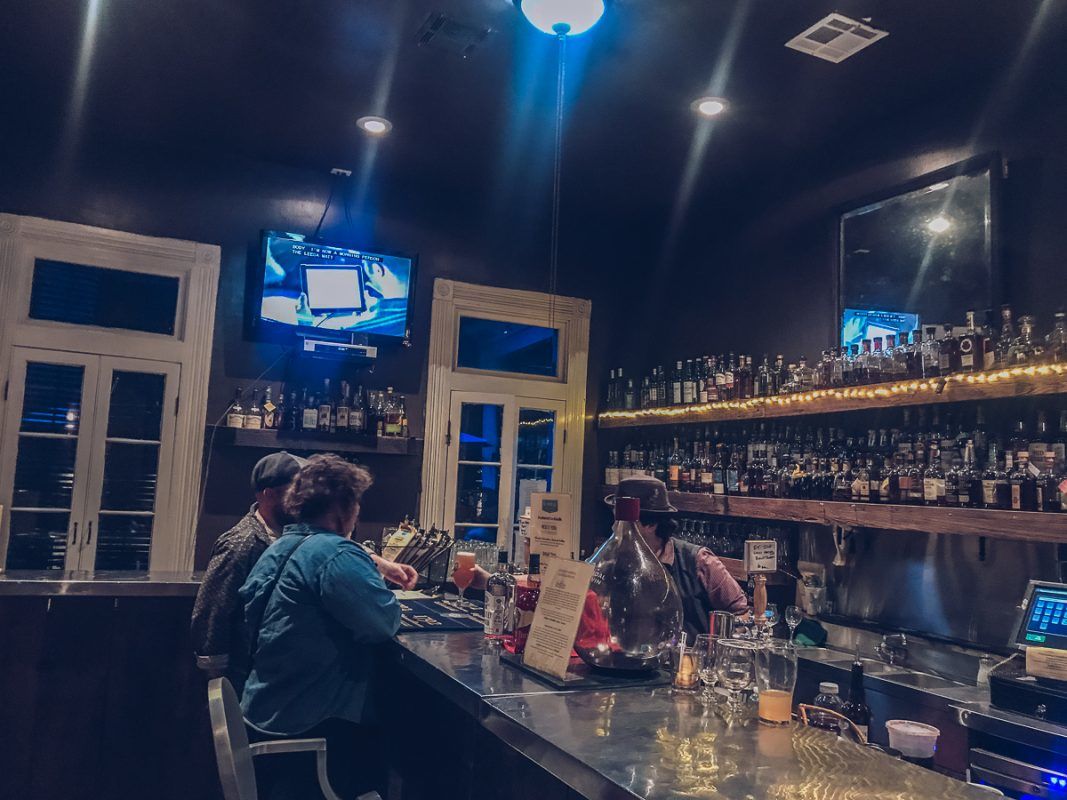 The upstairs Whiskey bar at Avenue Pub in New Orleans. 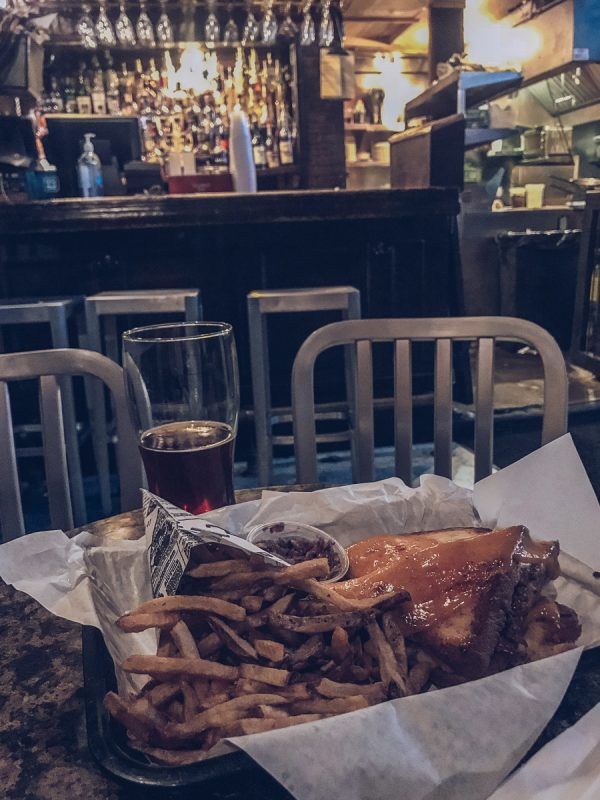 Croque Monsieur and a side of local New Orleans beer.

This beer bar is open 24/7 and is as cozy and intimate as you’d expect to find in a European pub. This bar has to have one of the city’s longest beer lists… And considering how long it took the craft brewery movement to catch on in New Orleans, this pub has beer an oasis for craft beer fanatics for years.

Along with a great beer list, and friendly staff, there’s an upstairs bar that is every whiskey-drinker’s wet dream come true. Plus, there’s plenty of delicious food here to fill up on!

I actually visited this beer bar when I first visited New Orleans several years ago, and on my most recent visit it was once again, heavily recommended. Magazine Street is one of the most beautiful areas in NOLA and should you find yourself over there, grab yourself a beer and relax by their beer tap water fountain.

Have you been to New Orleans? What’s your favorite brewery down there? Let me know in the comments, cheers!

The Best Things to Do in Asheville, NC...

The Best Things To Do in Chicago on...

What to Do in Nashville | A Travel...

7 Things You Should Know About Austin’s Circle Brewing