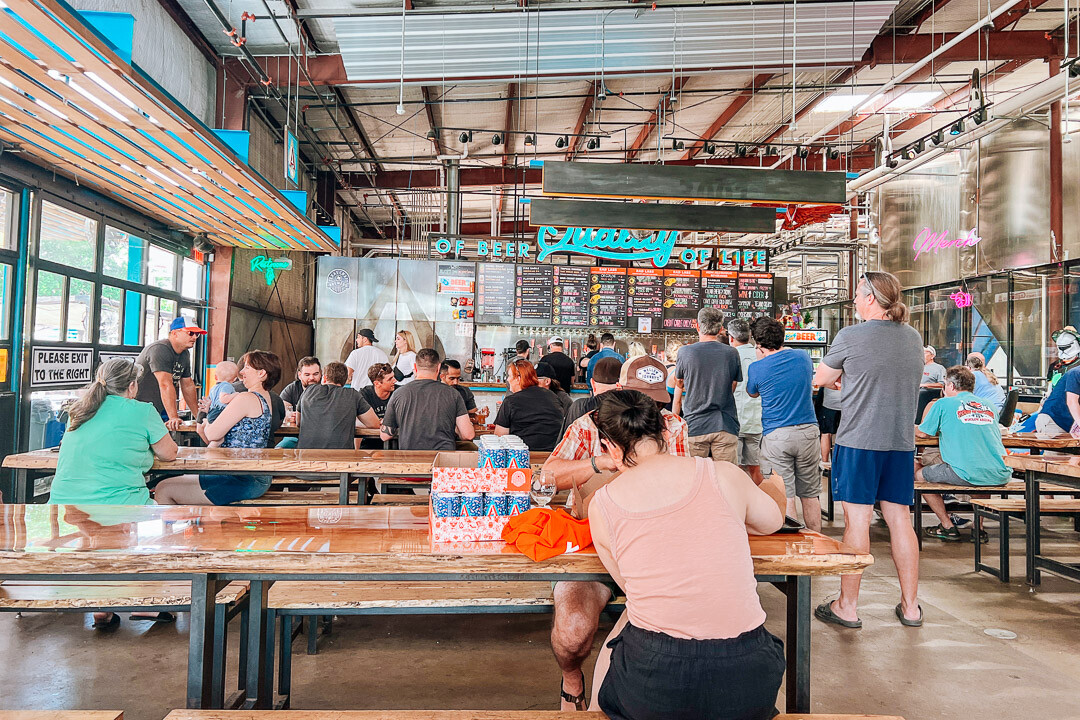 Lucky for me, I live right next to a hot bed of great Austin breweries. North Austin is home to some of the best brews this city has! From the Sputnik at Austin Beerworks, to Hopsquads Italian Pilsner, and now with Oskar Blue’s Dale Pale Ale; this side of town is straight-up a theme park for beer drinkers!

So here’s my reviews (packed with helpful information) of the six breweries who have made a home for themselves in North Austin.

Austin Micro-brewery that specializes in farmhouse and Belgian-style brews.

Adelbert’s Brewery was founded in 2011 and since then they have cranked out innovative Farmhouse and Belgian-style beers from their North Austin brewery.

Austin Beerworks is what many would say the best brewery in Austin. Their bright and color taproom features all of their beloved core beers plus many more seasonal and experimental brews. Both family and dog-friendly, there is also an onsite food truck.

If you’re here in winter, make sure to keep an eye out for their Sputnik Russian Coffee Milk Stout. It’s a beloved treasure for us Austin beer drinkers.

Employee-owned brewery serving beers alongside food such as fish and chips in a large industrial space with a pet-friendly patio.

Members of Black Star created their brewpub to be a democratic workplace, with livable wages for employees, while devoting themselves to using only the best local ingredients.  FYI, The patio is dog-friendly and they’re fabulously located right at Austin’s Crestview Light Rail Station.

Read This: Fill up With Delicious Craft Beer & Food at These 8 Austin Brewpubs

Austin’s first craft brewery founded by famed Belgian brewer and creator of the original Hoegaarden witbier, Pierre Celis. Today the brewery is run by his daughter and granddaughter with a new location that features an indoor taproom as well as a large outdoor beer garden.

Read This: What to Know About Celis Brewery’s Return to Austin

Brewery with a dog-friendly taproom that brews beers following the German Purity laws of only using water, malt, hops, & yeast.

Founded in 2010, Circle Brewing Company has a taproom in North Austin that is just as fun and hip as they are.  Circle Brewing believes in “Purity Through Simplicity,” and this manifests itself in the quality of their beers.

Using only the four main ingredients, water, malt, hops, and yeast, they brew some tasty beers. Their Blur Texas Hefe and Alibi Blonde are my two favorites, but with a constant rotation of seasonal beers, it’s really hard to stay loyal to one or two.

Their taproom is industrial (I mean, basically, all of these breweries are in an industrial/warehouse area) but decorated with fresh succulents and greenery, and a large chalkboard detailed with brews and highlights.

Read This: 7 Things You Should Know About Austin’s Circle Brewing

This brewery in Austin, Texas definitely flies under the radar, but it is a local neighborhood favorite. Along with several of their own brews, you’ll find boards and boards of guest taps from across the country.

I absolutely love this brewery. Their bright and colorful taproom is dog-friendly indoors and has a stellar view of the Q2 soccer stadium. Their tap list features plenty of fine lagers, my favorite is their Italian Pilsner!

Ok, Ok- this one isn’t an Austin brewery by birth, but it’s an Austin transplant like so many of us! So, it still deserves a place on this list. Oskar Blues, most famously known for its Dale’s Pale Ale, opened their Austin taproom just last month. This is a Colorado brewery that knows the game; they’ve been brewing and canning beers since 2002!

The large taproom in Austin features some totes rad art and a sizable stage making it a stellar Austin music venue.

Read This: How to Road Trip to Colorado from Texas

Where do I even begin with these guys? This is one of my “Top 3 Favorite Breweries” in Austin, they’re brewing some of the best IPAs in the country, and I don’t care what you say, but this place has the best pizza in ALL of Austin.

Sadly, this location is temporarily closed for renovations. However they have three more locations around town, including two down south.

Homebrewers Chris and Whitney finally opened their own place and it’s gotta plenty of room for them to expand. Delicious food, even better beer.

Home brewers Chris Rauschuber and Whitney Roberts just opened their brewpub in North Austin making small plates in-house to serve alongside German-style beers. These two have had plenty of practice brewing, so they’ve been able to open up to the public with a long list of clean and refreshing beers.

Slackers is one of the new Austin breweries, but they’re a welcome addition to the Anderson Mills area. I was so impressed by their Kolsch and their latest release, a Ghost Pepper Porter! As time goes on, you can expect to see less and less guest brews, and more from Slackers.

Even though Texas isn’t known for their apples, cider is having quite a moment here in Austin. And now, we’ve got a killer cidery joining the breweries up north.

Even if you’re strictly a beer drinker, you have to make a stop here. Know that the two founders, John Staples and Michael Gostomski, are both beer drinkers themselves! In fact, what makes Fairweather Cider so unique instead of using the typical champagne yeast, they’re using a farmhouse ale yeast.

Currently, the duo have two stars that stand out in their stellar, and long tap list: Common and Tejano Dreams. Their first cider was Common, a super dry farmhouse style table cider that’s, as John says, “one you’re going to be drinking everyday.” Tejano Dreams is  fermented with Anaheim peppers, and you’ll get more fresh chile notes over the expected spicy heat.

Read This: Apples of Our Eyes: a Guide to Austin Cider

What is Your Favorite North Austin Brewpub or Taproom?

Which North Austin brewery is your favorite?! Leave it in the comments! Also, make you’re subscribed to my blog/website. I would hate for you to miss out on any of my Austin adventures & beer discoveries! Heading East? Check out my East Austin Brewery Guide!

Austin Breweries: A Guide to the Best Central Texas Taprooms (2022)