Oktoberfest in Munich, Germany 2022 – Everything You Need to Know 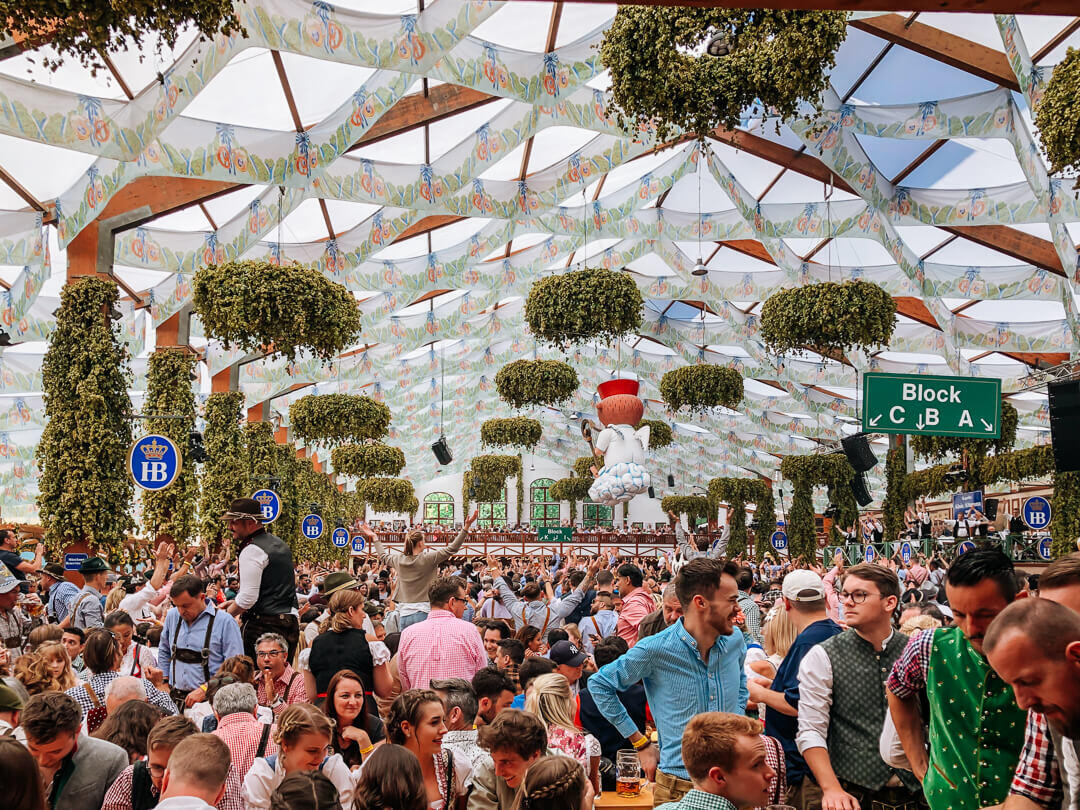 In 2019, I attended Oktoberfest in Munich, Germany. This is a bucket-list beer festival for almost all beer drinkers, and my time to cross this item off the list had finally come.

My expectation vs reality of the Munich Oktoberfest was quite shocking.

I came prepared with research, but no amount of research can prepare you for this festival…

So that’s why I’m here writing this ‘Ultimate Guide to Oktoberfest in Munich’. The best part is, that this guide is written by a passionate beer drinker who loves helping (Yea, it’s me!)

When writing this guide, I set out to write a guide that I wish I had when I visited.

Along with what I wish I would have known, I’ll also share my experience and what you’ll want to prepare for. Yea, you could say this is the ultimate Oktoberfest travel guide.

In 2022, Oktoberfest in Munich, Germany will take place from September 17th to October 3rd.

Typically the festival is 16-18 days long, usually running from mid or late September to the first Sunday in October.

Oktoberfest Germany 2022: What to Know Before You Go

The last time I was at Oktoberfest was in 2019. At the time I had no idea that a global pandemic would turn the world around, just a few short months later.

Because of Covid-19 Oktoberfest was canceled for two years in a row. But it’s back, baby! The Munich festival has only ever been canceled a handful of times in history. I’m sure you can guess when…

Anywhos… Here are some pointers about what to know before you go to Oktoberfest. It might seem like word vomit, but it will be helpful.

Arriving at Oktoberfest in Munich, Germany

When we went to Europe in 2019, we planned on driving by car for 3 weeks throughout Germany, Belgium, and Prague. You can read more about that here. The trip started with a work event that I attended in Prague and ended with us attending the first few days of Oktoberfest.

(By the way… Most of my time in Munich, Germany was taken up by the Oktoberfest so sadly I won’t have too much to recommend beyond that.)

I heard that the opening of Oktoberfest is one of the busiest times and that there was also a whole slew of traditions surrounding the kickoff.

The most notable being the parade of the Wiesn landlords and their breweries.

The parade of the landlords marks the official start of Oktoberfest. It takes place on the first Saturday of the Wiesn before the famous “O’zapft is!”.

There’s also the Oktoberfest tapping ceremony by the mayor of Munich in the Spaten tent. (No one can pour or drink beer before this tapping).

Beginning in 1950, the festival has always been opened with the same traditional procedure: At noon, a 12-gun salute is followed by the tapping of the first keg of Oktoberfest beer by the Mayor of Munich with the proclamation “O’zapft is!” (“It’s tapped!” in the Austro-Bavarian dialect).

I loved this parade! We arrived early for a good standing spot on the sidewalk. But it was magical. All of the horses and outfits and flowers.  I even snuck into a corner shop before it started to grab us a few pre-festival beers.

For more information on events happening at Oktoberfest, visit the official website here.

So after the parade of the Wiesn, it was time to migrate to the fairgrounds, which were a few blocks away. By the time we arrived, they had already tapped the opening keg.

I was a bit bummed out about that. I think to see that, you’ll need to skip the parade, and head to the tent early.

We walked and walked, and then we were finally there. There was a quick bag check and then it was onto the fairgrounds.

Some things that I did not expect at this point:

This brings me to our next festival aspect: BEER.

When you hear Oktoberfest, most likely your mind only thinks about beer. This was the one aspect of the festival that I had the hardest time adjusting to.

Here’s why. As Americans we hear “beer festival”, we think of a festival featuring dozens and dozens of breweries from wherever, pouring tiny, nearly endless samples of wild and unique brews.

You can grab a sample, mingle, and move on. Y’all know the drill. Well at Oktoberfest in Germany, it’s a bit different!

What Beers Do They Serve at Oktoberfest?

First and foremost, let’s talk about the beers they serve at Oktoberfest. In short: it’s just one style but done by all the breweries in Germany’s Bavaria Region. That style is Märzen.

What is a Märzen Beer? This amber lager gets its name from the German word for March which is the time of year the beer is brewed. Märzens use more hops than a typical Bavarian lager, and that’s done to preserve the beer. It was first introduced to the world at the 1872 Oktoberfest.

However, the main style of beer served today at Oktoberfest in Munich, Germany is a Festbier. In the US, you’ll find most “Oktoberfest” brews are Marzens.

What is a Festbier?

Festbier on the other hand is a golden-colored lager style that came to replace the Märzen lagers of Oktoberfest in the 1970s. This easy-drinking beer was first created and pioneered by Paulaner.

Furthermore, only the six Munich-based breweries are allowed to name their beers for the festival Oktoberfest. So any other brewery must call their seasonal lagers, amber or golden Oktoberfest-style beer

How to Order Beer at Oktoberfest?

Secondly, this is always a huge bummer for people to learn on their first time at Oktoberfest in Munich… But to order a beer you must be seated at a table inside one of the brewery tents.

Kind of a bummer, but the tents are quite lively. And full of delicious food and live music. The biggest challenge is getting a seat and deciding whether to stay put (getting a seat ain’t easy) or risk it to visit a new tent.

Now I guess is a good time to move on to our experience with the TENTS.

If you’re coming to Oktoberfest for the beer, the tents are where you’ll most want to go. Each brewery has its unique tent. The festival itself has 17 large tents and 21 small tents, with 14 beer tents in total.

Tip: I don’t suggest trying to get a beer at each beer tent. Unless you have 3-5 days and a lot of patience to find seats.

As the small tents have only reserved areas in the evening, reservation-less drinkers will have to choose between the large ones. You don’t have to make reservations though. Jason and I did not and we went to several different tents.

Finding a seat was a pain, but it happened. You just have to make your way and kindly ask people if they have room to scoot over. (IDK, maybe there’s a better way to do it but I was trying to be polite!)

Overall, to me, I thought all of the beer tents were fabulous. Their energy reminded me a bit of the Quidditch World Cup from Harry Potter. Anyways, which beer tents are the most fun, however, depends on your preferences…

Here are some highlights to know about the beer tents at Oktoberfest in Munich, Germany:

One of the best ways to offset the effects of all those steins of beer at Oktoberfest is to indulge in all of the delicious food served at the festival. One of my most vivid memories of Oktoberfest was the endless trays of food served in the tents.

In the tents, you’ll find hundreds and hundreds of rotisserie chickens, giant pretzels, and all types of sausages. Outside the tents, there are far more options for food, So explore and let your taste buds enjoy all the deliciousness of the festival.

The Dirndl and Lederhosen are the most common pieces of traditional German clothing associated with Oktoberfest. They, however, have roots that go way beyond being a beer festival outfit.

Since we were driving around the Bavarian region of Germany it was relatively easy to shop for amazing, authentic Oktoberfest clothing.  And now, even years later, my dirndl is still such a special outfit for me!

Head over here to learn more about Oktoberfest fashions and get my tips on how to dress.

Looking for More Oktoberfest Guides? Check These Out!

Thank you for making it this far! I hope all of this information is helpful for you and your time at 2022’s Oktoberfest in Munich, Germany. There is so much information, history, and traditions, I certainly wasn’t able to cover it all here.

So for the most complete and up-to-date information about opening times, events, reservations, and maps visit the official Oktoberfest 2022 website here.

If you’re looking for more beer festival or Europe guides, check out these blog posts!

What to Know About Celis Brewery’s Return to...

Best Gifts for Beer Lovers: Guide to the Top Beer Gifts of 2022