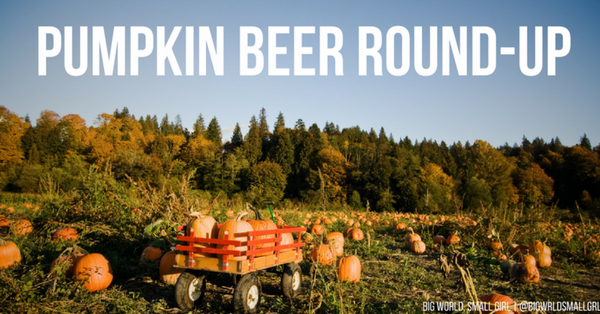 Cold weather brings out the heavy craft beer drinker in me. And it starts at the beginning of Fall when it’s pumpkin season! Pumpkin beers are pretty polarizing in the craft beer community, but I’m 100% Team Pumpkin Beer (and it’s all good by me if you don’t like them).

So I stopped at the nearest bottle shop, Sunrise Mini Mart, to buy every pumpkin beer they had in stock. Sadly, they only had three, so I grabbed those and then a coffee porter, cause ’tis the season, right? Let’s look at the four beers I got to help me bring in the Fall season, even if it’s still in the 80’s here in Austin.

I’m big fan of sours, so you can imagine how excited I was to see a pumpkin-spiced sour on the shelves at the mini-mart! This brew from Boulevard Brewing has been around for a few years, but this was my first time with the Funky Pumpkin. Like fall, this beer has the best golden-orange hue that is accented by an overload of carbonation bubbles and a tall, white head.  The smell is great, the crisp notes of apples mixed with a bit of spice reminded me of picking apples! I was hit first by the familiar taste of a sour beer, then comes the malt backbone and that funk yeast. I was a bit disappointed to not experience more of a pumpkin flavor from this brew but it was very enjoyable and easy to drink. Also, if you’re *not* into pumpkin beers, give this one a try. My boyfriend hates pumpkin beers but thoroughly enjoyed this beer from Boulevard Brewing!

The description of this beer says it all: “full-bodied brown ale brewed with real pumpkin, brown sugar, allspice, cinnamon, and nutmeg.” Ok, now wipe the drool off your keyboard or cell and keep reading! A stunning, deep warm orange color was noticeable right away as well as the carbonation going to town and releasing bubbles like a glass of champagne (clearly I didn’t get the shot in time, but trust me!). The smell is cinnamon and nutmeg, and boy, it comes in strong. The taste of pumpkin mixes for an interesting blend with malt flavor.  The taste was like pumpkin pie, so freaking good. This was my favorite of this round of beer tastings, it is true to what a pumpkin beer should be!

This brew aims to bring back a traditional style of ale that were brewed by the Early American colonialists. Hundreds of pounds of pumpkin are blended into the malt mash, so you’re drinking the real deal with this pumpkin beer.  Post Road Pumpkin Ale is deep gold and color with a bit of an off-white head. The smell is incredible: toasty malts, bready yeast, and both cinnamon and cloves!  Taste, not so much.  A bit too bitter for me, I would have enjoyed some more sweetness to complement the pumpkin and cinnamon and balance out the hops and clove. Just a tad more, that’s all ya need!

Ok, so since the first shopping trip to stock up on pumpkin beer wasn’t the biggest success, I wanted to try another beer style that I like to get down with once summer starts to fade: COFFEE!  Porters and stout season (well IDK if there’s a specific season for those styles, but I like drinking them in winter most, so we’ll go with that!) is right upon us so I decided to get in the mood early.  And I have seriously missed these types of beer.  Boulevard starts with a dark, smooth, rich, and roasty porter and then add to it dark coffee from local roasters, Maps Coffee Roasters, to create a “marriage” of two of the best beverages in the world! Taste, smell, feel, it was all coffee, I’ll save you the time.  But I do want to note how easy it was to drink, considering it was a porter! If you’re into coffee and/or porters this is a good one to go with.

Have any recommendations for me? Good or bad, I wanna hear them!

So that was my first batch of pumpkin beer reviews, but I will be doing another batch so stay tuned. If you want to make it easy for yourself just sign up to receive an email each time I add a new blog!