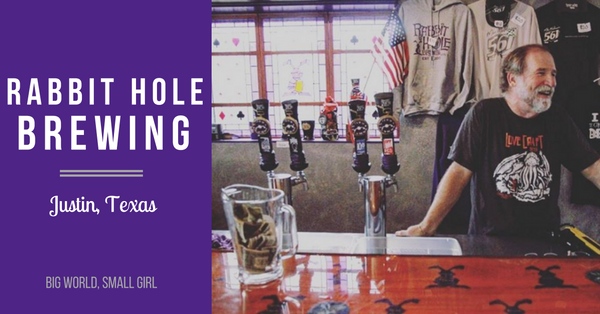 So once again, Twitter suggested I follow someone “related to me” and that someone was Jim Inskipt. Jim works at Rabbit Hole Brewing, just outside of Fort Worth in Justin, Texas. And as fate had it, we got connected right before my trip to the DFW Metroplex and right as Rabbit Hole were gearing up to hit the shelves in Austin.  Jim invited me down to check out the brewery and hear a little bit more about what makes them awesome and why they’re so excited for the Austin craft beer market. And let me tell you- they’re gonna fit right in with this city and its craft beer connoisseurs.

This Friday, December 9th, Rabbit Hole Brewing’s beer will hit all Austin HEB stores in a unified launch. Rabbit Hole beers will also be on draft in the city in the coming weeks. Expect $7.99 (special pricing for the first 15 days of their Austin craft beer debut) six packs of their three core beers: 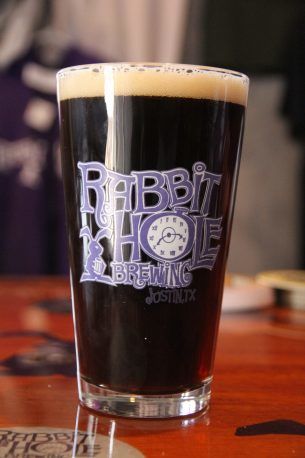 Rapture Fusion Brown Ale – A rich, toasted malt characterizes this English/American Fusion Brown ale with Pacific coast hops that provide a balancing bitterness and the most subtle citrus character. Rapture has won Rabbit Hole Brewing many awards and I look forward to being able have another incredible Brown Ale to stock the fridge with!

Mike Modano’s 561 Kolsch Style Beer – Another award-winning Rabbit Hole Beer, this Kolsch-style is clean and crisp, yet complex. Mike Modano’s 561 delicately balances between soft malt and subtle, fruity hoppiness. If you’re a hockey/sports fan you probably recognize the name and number since Mike holds the record for career goals for US-born hockey players. Mike’s also a big fan of Rabbit Hole Brewing since his first taste back in 2014.

10/6 English Pale Ale – This English Pale Ale has won some noteable awards (including GOLD in 2016 for Best of Craft Beer in English Pale or IPA category) thanks to a unique and prominent English hop character supported by a smooth, bready malt backbone.  Not a huge fan of IPAs but this Rabbit Hole brew is an exception for me now. 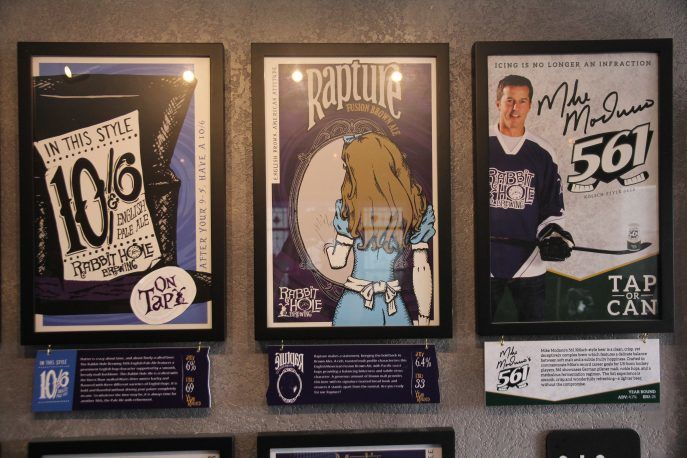 Hitting Austin beer shelves one day before their 3rd birthday, 2017 holds nothing but more growth for the guys at Rabbit Hole Brewing in the DFW Metroplex!

When I got to check out the brewery, Laron Cheek, Founder/Owner/President, and Clint Stapp, Brewer/Culinary Genius at Rabbit Hole, were more than happy to talk to me. Alongside Jim, we all talked about their incredibly unique brewery, they’re plans for expansion, and why they think they’ll make a great fit for Austin’s craft beer drinkers. 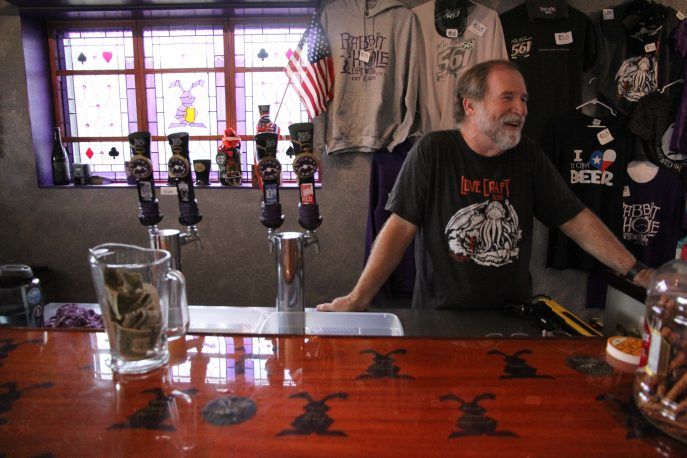 So, immediately upon walking into this DFW metroplex brewery, you’ll feel like you’ve stepped into the rabbit hole and fallen into Alice’s Wonderland. All of the beers are a play on words from C.S. Lewis’s much beloved story and the little purple rabbit logo with crooked ears can be spotted everywhere. 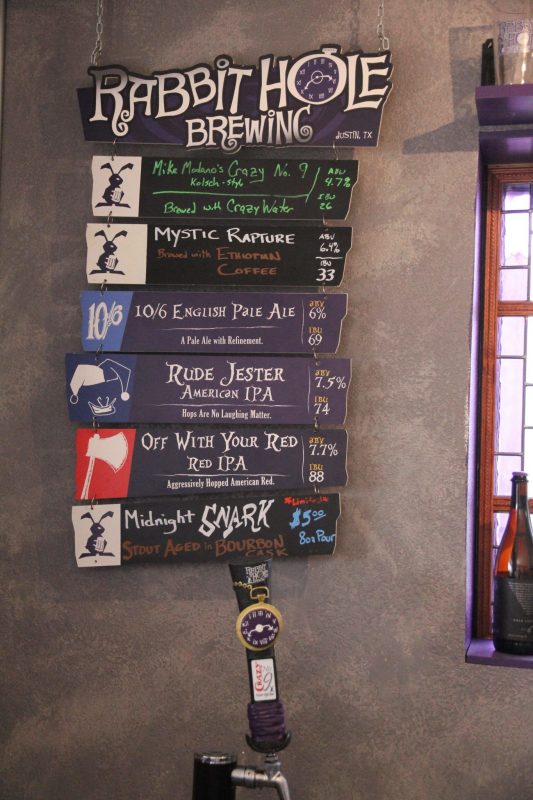 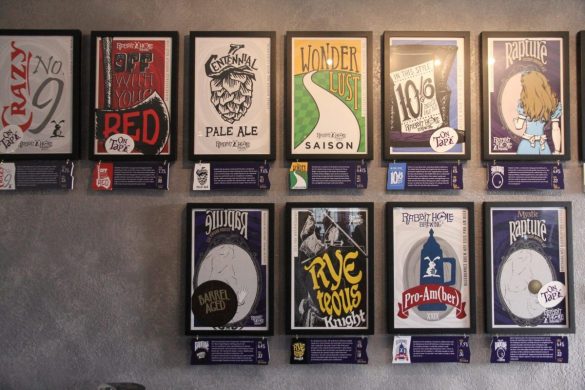 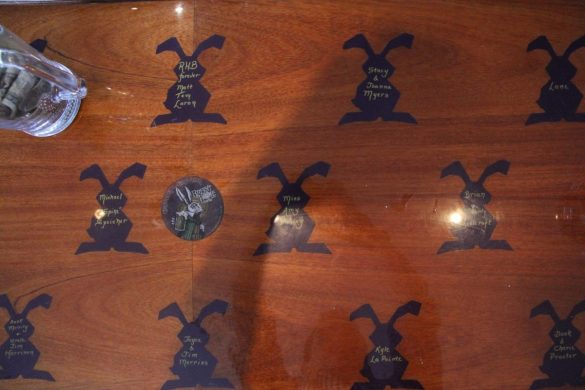 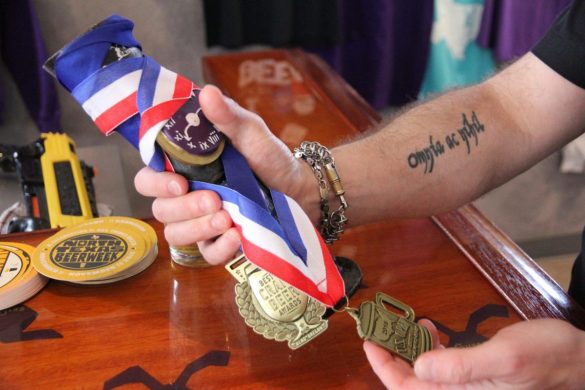 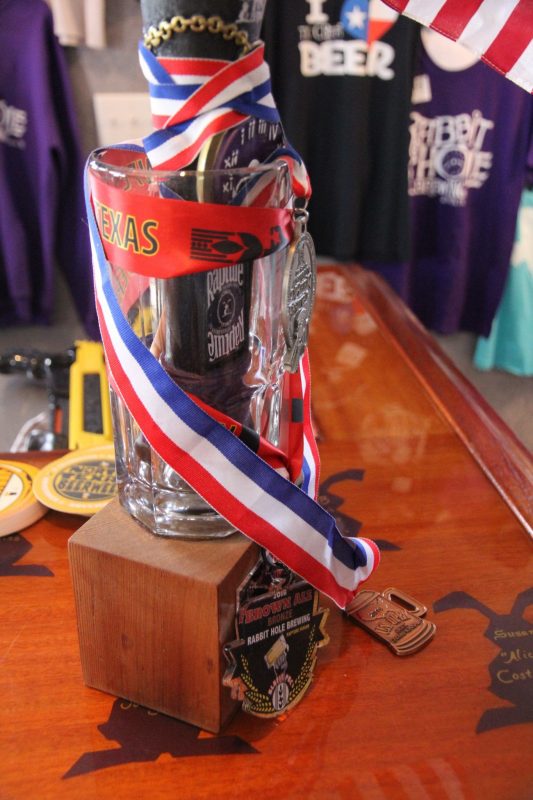 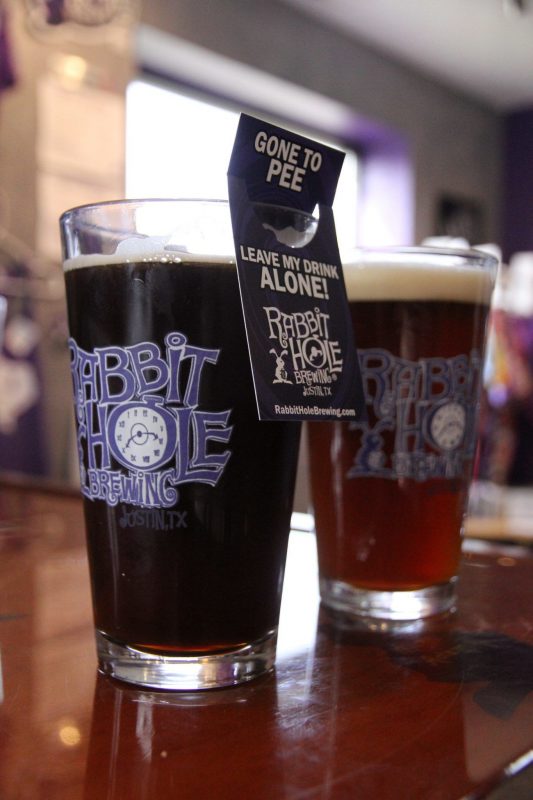 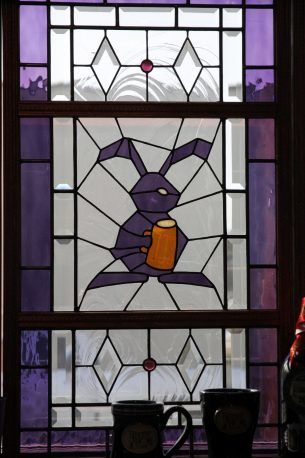 The stained glass windows behind the bar are eye-catching and have a great story- Head brewer, Matt Morriss, has an extraordinary mother who is a skilled stained glass worker.

Created by Joyce Morriss over 280+ hours, she hand selected and cut each piece of glass so the grains/waves match from piece to piece.

Copper was then placed in between the pieces of glass and soldered into place revealing the beer bunny logo.

293 pieces of individual glass, it is no doubt a true masterpiece!

We all know there are four seasons, but Laron explained to me that Rabbit Hole said screw that, “We’ve gotta do something different.” So at Rabbit Hole Brewing the beers they choose to create are controlled by the three seasons in Alice in Wonderland:

Season of Fear happens between September to December and it’s controlled by the Red Queen. During this season, you’ll find strong, high ABV beers such as their Off With Her Red, an “aggressively” hopped red IPA with a massive malt backbone and captivating dark ruby/garnet color.  Don’t mess with this one or you just might lose your head!

Season of Dellirium is controlled by the Mad Hatter and comes next, lasting from the end of December into May. This season is the one for all of Rabbit Hole Brewing’s crazy beers, as the Mad Hatter is the one in control during this time! And it’s their way of brewing popular world styles that are commonly sold here. Coming soon during this season is their Hole Lang Syne (which will have a limited bottle release) is a Belgian Golden Strong Ale brewed with raspberries and blackberries. Other releases during this season have included Dark Snark, a complex, fruity-aroma filled stout.

Finally, Season of Virtue comes from May until September and is controlled by Alice herself. The season has lighter beers that fit right in during Texas’ hot summer days. One notable brew from this season is their Wonderlust Saison Ale. It’s perfectly bright, spicy, and crisp; just what you need for getting in the mood for sunny weather!

Rabbit Hole Brewing is taking these seasons to the next level in 2017 though.  Starting this year, Rabbit Hole will have three seasonal releases named specifically after their season and they’ll be available in bombers! That will definitely be something to look forward to as these guys grow in the Austin market. 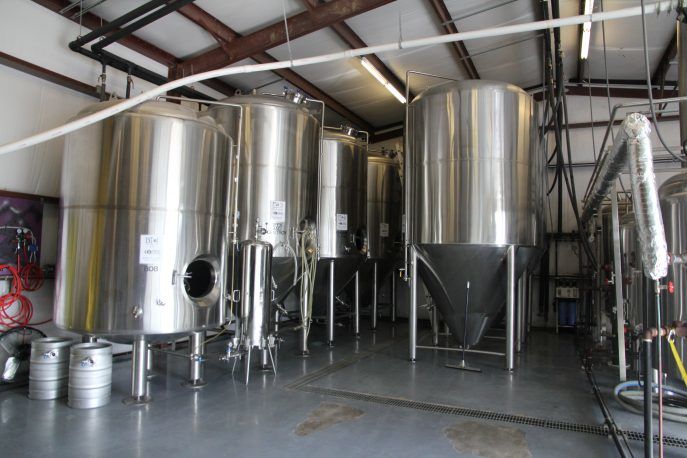 Where the magic happens!

While I was there, I also got to sip on one of their bourbon barrel aged beers (OMG it was so good), taste first-hand the difference minerals and PH levels in water have on craft beer (Massive!), and given the run-down on the proper way to tap a firkin. These dudes treated me like a friend and their desire to brew the less represented beers has me very pumped for their Austin arrival!

After I got the low-down on what makes the guys (and beers!) at Rabbit Hole so different and delicious, I was curious to know: why Austin?

Laron had a great reason for why the brewery is so exciting to be expanding their distribution to Austin, “When you go down to Austin, there’s a more mature market, you have such experienced people.”  The DFW market’s palette just hasn’t developed or matured to the level that we’re at down here in Austin.

They’ll always love and adore the DFW metroplex market that has supported them, but that area is “still young in terms of the craft beer scene.” And that has translated into much of the market not understating a lot of the things the brewery aims for. 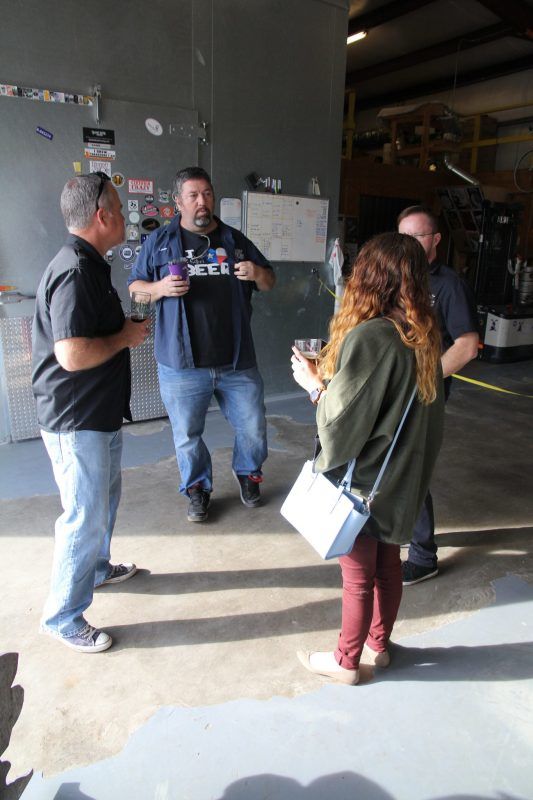 From left to right: Clint, Laron, and Jim

A perfect example of this is their 10/6 English Pale Ale.  Rapture English Brown Ale has been very successful among beer drinkers in DFW,and so has their 561 Kolsch-style, but their 10/6 just hasn’t shared in that success.  Many people in the DFW metroplex aren’t comfortable yet and people have told these guys, “I don’t know that an English Pale Ale is, so I’ll just avoid it and stick to what I know and like.”

That attitude is very rare for craft beer drinkers in Austin. Here in Austin, we look at a new craft beer style that we might not be familiar with and think, “I don’t know what this English Pale Ale (or whatever other style) is, but I want to know. I’m going to go do some research about it, I’m gonna read about it, and I’m going to go have a few different types of it.” This is what has Laron and the other Rabbit Hole Brewers excited for Austin.  Laron feels that the DFW metroplex will be at that point someday soon and his beers are helping that market get there even quicker!

So far, all of Rabbit Hole’s expansions have been in small markets like Amarillo or Lubbock and they did that very specifically since they still wanted to support and have great craft beer for their DFW fans. Their first venture into a big city market left them with the choice of San Antonio or Austin and Laron says “it took a lot of soul-searching and decision-making,” to choose Austin.  And that’s because Austin is one of the hardest beer markets in the state!

He continued saying, “I think the people in Austin are really going to be excited about some of the stuff we do. It will be a little left of center, kind of outside of the core styles. The concept at Rabbit Hole Brewing is doing things that unique. I think the Rabbit Hole mentality is going to work really well in Austin.” 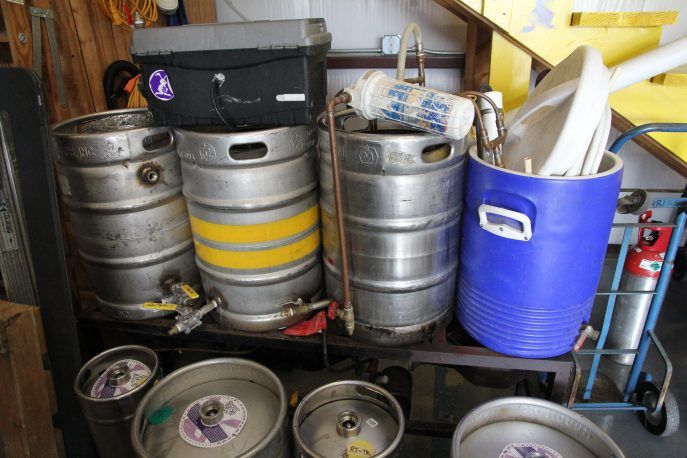 Laron, Clint, Jim, and I all had such a long conversation about how interesting and mature the craft beer market is in Austin, and they opened my eyes to another big reason why craft beer is booming right now. And you can blame it on them damn millennials! 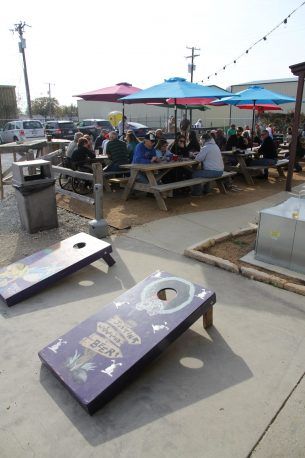 Laron explained to us the difference in choices that he had as a teen/young adult and the choices his teenage son has now. Laron told me, “When I was a teenager and wanted a burger, we had two choices: McDonald’s and Burger King. Now when I ask my teenage son if he wants to grab a burger, he doesn’t suggest McDonald’s, Burger King, or even Whataburger. He suggests a place like Kenny’s Burger Joint, or Five Guys, or some gourmet burger made by a chef.  And that’s what millennials are used to. If I asked my son if he wanted fast food, then he would most likely suggest McDonald’s or Burger King.

“Millennials, what they look at is, ‘I have this much spending money. I can either take my $25 and get two cases of Miller because I want to get hammered, or I can go grab some food at Taco Bell because I’m hungry.’ And of course, there is a time and a place for that. But the Millennials also have the experience of going, ‘I want a really good burger, I want a really good beer.’ And to get that really good beer they’re going to spend $8.99 or $10.99 for a six pack.  They’ll spend $12 or $15 or a burger crafted by a chef. This is the first generation that truly understands the difference.”

And what he said, makes perfect sense to me as a Millennial.  This generation—my generation, values (and basically treasures) quality and craftsmanship, we are proud of supporting local businesses and having a variety of options for what we consume. This makes total sense to me when I wonder where this craft beer revolution came from and how has it grown so fast!

All in all, after my afternoon spent with Rabbit Hole Brewing, I’m super excited for them to be selling their products in Austin (they’ll be in H.E.B.’s December 9th, so grab a six pack of their core beers while it has special pricing!!).  The people and passion behind the beer being brewed at Rabbit Hole will be a perfect fit for the craft beer drinkers of Austin. 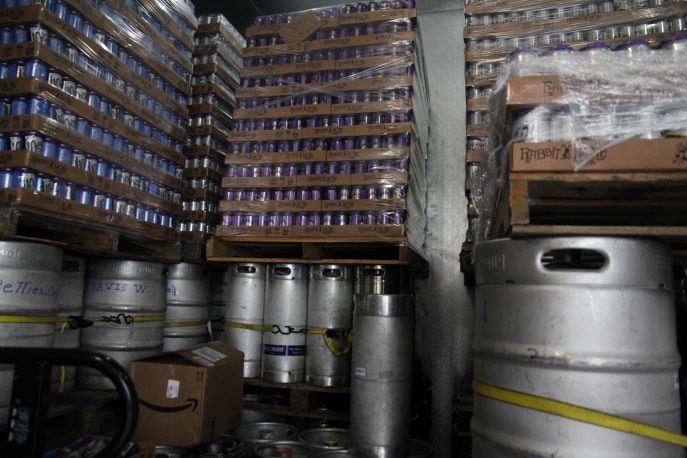 And if you’re ever in the DFW metroplex, make sure to stop in to Rabbit Hole Brewing for more underrepresented craft beer styles! And tell ‘em Caitlin sent yall! Cheers!