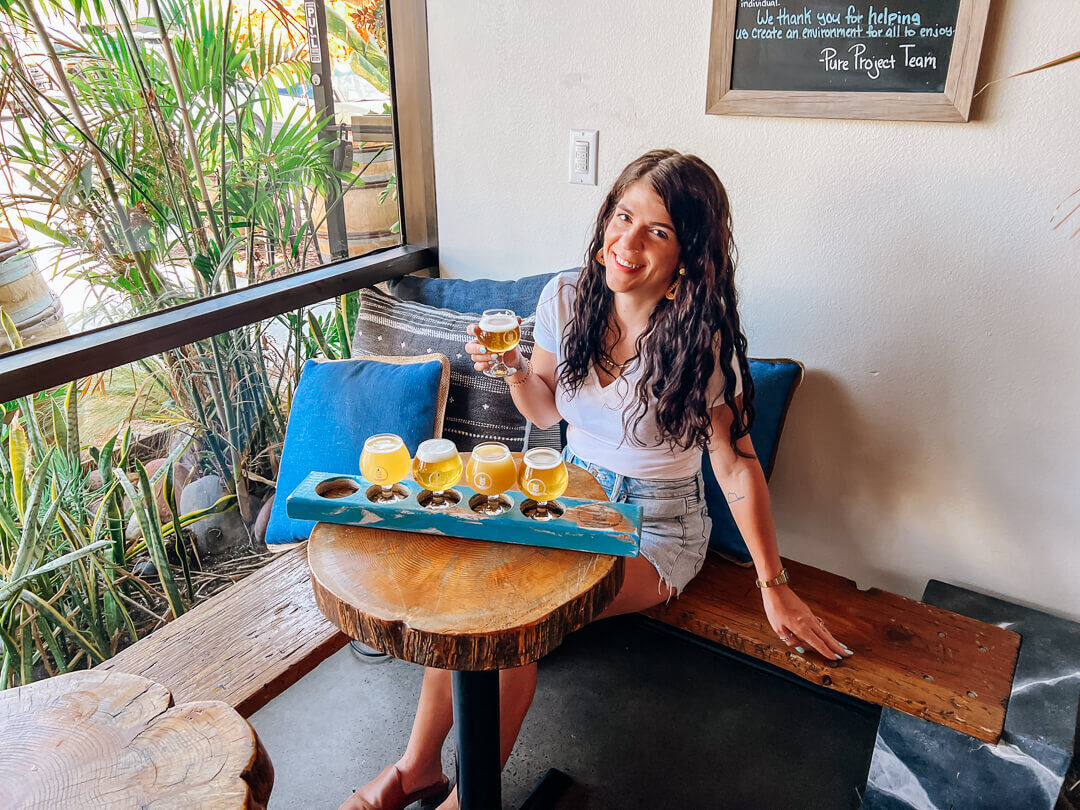 So you’re looking for the best San Diego breweries? With around 150 microbreweries, taprooms, and brewpubs throughout the area, it can be quite overwhelming. Even for a seasoned beer nerd like myself.

Luckily, I’m fresh from a trip to San Diego and eager to share all the amazing craft beer we had there. While I didn’t get to visit them all, we visited a lot!

In this post, you’ll learn about my favorite breweries in San Diego. As well as some breweries that we didn’t visit, but still highly recommended from other beer lovers.

How Many Breweries are in San Diego?

You might be wondering exactly how many breweries are in San Diego, California? Well the answer is one that will surprise you. Per the official Visit San Diego and San Diego Brewers Guild sites there are over 150 “independent craft breweries” in San Diego. BUT it’s getting closer to 200.

The number “over 150” has not set well with me. So I went to the brewers guild website linked above, and used their search function to browse their members…

And well the actual number of breweries in San Diego? 178! That number comes from the number of brewery members in the guild. It also accounts for breweries that have multiple taprooms. (Each taproom/location counts as 1.)

That is something else to note about the high number of San Diego breweries. Many of these breweries have 2-4 taprooms!!

So when coming up with a list of what are the best breweries in San Diego to visit, I relied heavily on recommendations and going to some of the bigger establishments.

If you didn’t know, this city is also the birthplace to some of beer’s biggest and most respected breweries. Most notably, Stone Brewing and Ballast Point.

But enough chit-chat, let’s get into the 12 most essential breweries in San Diego, hand-selected by me!

AleSmith Brewing has one of the largest taprooms in San Diego, but that’s not the reason why it was so heavily recommended. Founded in 1995, this brewery is a San Diego establishment that produces multiple award-winning beers.

Today the brewery sits two blocks from its original taproom. From what was a 15 bbl system, they’ve grown into a massive 85 bbl brew system allowing them to deliver their amazing beer to the masses.

At their dog-friendly taproom in Miramar, you’ll find cool and refreshing AC. While they don’t have food on-site, there is a food truck outside to help you keep your belly full.

Ballast Point started from just a small group of San Diego homebrewers who in 1996 decided to take their hobby full-time. Now, their beer is enjoyed and loved all over the world. With three taprooms in San Diego, you won’t ever have to travel far to taste their brews straight from the source.

While their beers are available in grocery stores (mostly all over), I still highly recommend making a stop here a priority. Alongside their popular Sculpin IPA and its many variants, you’ll find many, many more styles and special batches not available in stores.

We visited their taproom in Little Italy, which also offered food. Personally, I love getting flights at Ballast Point. The way they serve them is an art, and not to mention how stunning their glasses look. (I became familiar with Ballast Point when they had their East Coast location in Virginia, close to my hometown).

This was the first taproom in San Diego we visited, and goodness, did it set the bar high. We stumbled upon EPPIG’s Point Loma waterfront beer garden, and had the most relaxing, sea-breezy chill time.

Not only were the vibes good, but the beers were 100% something to write home about. Overall, from the dog-friendly and open taproom to the friendly regulars, this San Diego brewery is not one to miss.

Granted, I can’t speak to their other taprooms, but looking at the reviews for them, they seem to be well-loved all over!

A post shared by Half Door Brewing Co. (@halfdoorbrewingco)

Right between the Gaslight Quarter and San Diego’s East Village, sits a cozy brewery with a bright blue door. Located one block from Petco Park, this taproom offers it all, plus some.

What caught my eye the most, besides the beer, was their delightful array of charcuterie boards. If you come with a bigger appetite though, whether it be for brunch, lunch or dinner, you’ll have your choice of many delicious dishes that pair perfectly with their brews.

Mike Hess Brewing is another one of San Diego’s very-well-known breweries. While not quite at the level of a Ballast Point or Stone Brewing,  Mike Hess has taproom locations all over San Diego and Southern California.

Since starting in 2010, back when they were one of only 1,700 breweries in the country, they’ve stayed focused on their original mission: to bring people together over great craft beer. And in case you were wondering, yes all of their taprooms are dog- and family-friendly.

Tip: We sadly didn’t visit this brewery, but if he had, I would definitely do their large flagship brewery in North Park.

Modern Times is a craft beer icon. From their signature brightly-colored striped can designs, to their perfectly brewed IPAs, they’ve made a name for themselves in the crowded San Diego craft beer scene.

Both of their taprooms are brightly and colorfully decorated, but the photos in this post are from their Point Loma location. Side note: If you’re a coffee fan, you’ll love being able to bring home a few bags of their own coffee beans!

In recent times however, the brewery has fallen under some scrutiny regarding the layoff notice they gave to employees during their sale to Maui Brewing. You can read more details about that here.

Sadly I was unable to visit North Park Beer Company on this visit to San Diego, but due to all the recommendations I got, it will be a high priority next visit. Opening in 2016, North Park is one of the newer breweries on the scene. Since then, they’ve pulled in medals for their beers.

Their standout though is their Hop-Fu! IPA which has become “ the single most award-winning homebrew recipe in history and in the most competitive category — the American IPA”. Dang, very impressive!

One of my favorite San Diego breweries is also the one that you’ll hear locals recommend most often. Sitting just a few blocks from the beautiful Ocean Beach is Pizza Port. It’s an unpretentious brewery that has a never ending beer list of amazing brews.

Even longer than the beer list is the  pizza menu. Who knew there were so many amazing pizza toppings and combinations (well, Pizza Port obviously did)? You can also get a New-York style slice of a classic pepperoni too if you’re not feeling too adventurous.

Pure Project in San Diego is my favorite brewery that I’ve visited in the area. And considering they have 5 locations, I don’t feel like I’m alone in this obsession with Pure. Yes, the name might be simple, but it’s one of those, after you visit here, you’ll totally get.

We went to their Miramar taproom which had an impressive beer selection considering the size of their brewery. The small and cozy taproom was overflowing with plants, as well as loyal regulars and curious tourists (like myself).

All of their beer was amazing, I highly recommend getting a flight so you can experience all they have to offer. Personally, their saison was one of the best that I have ever had.

Additionally, something I learned while there was that they are using completely compostable 6-pack rings. Heck yes for Mother Nature! This is currently pretty rare, but I do hope we see more breweries following their lead.

This spot is another San Diego brewery that I sadly missed visiting. But from all the recommendations and reviews I’ve read, you don’t want to make my mistake! Since opening in 2016, this brewery has won countless awards, from a local level all the way up to the Great American Beer Festival.

Stone Brewing is an icon, and not just in San Diego. They are one of the first breweries that really got me into craft beer. Coming here is like coming to Mecca, it’s a must! When you go, make sure to order my favorite beer: their Arrogant Bastard Ale.

Last but not least is one of the more unique places on this list of San Diego best breweries. And I promise you, you’ve never been to a brewery like White Labs. First you need to know that this brewery is dedicated to educating beer and food lovers about the impact of yeast. Especially in beers.

With two locations, Asheville and San Diego, both coasts can get an education. What I loved here was that many of the beer styles on tap had 2 variations. The only differences between the two are the types of yeast used. And boy, oh boy, I had no idea yeast could play such a role in the beer taste! Make sure to visit and see for yourself.

Now It’s Off to You!

Do you think there’s anyone who has been to all of the breweries in San Diego? If so, I’d love to meet them! If I left off any of your favorites from your list, please let me know!

This was my first trip to San Diego, but it won’t be my last. So y’all know I’ll need more recommendations!

There Are 100+ Denver Breweries, Here are my 13 Favorites