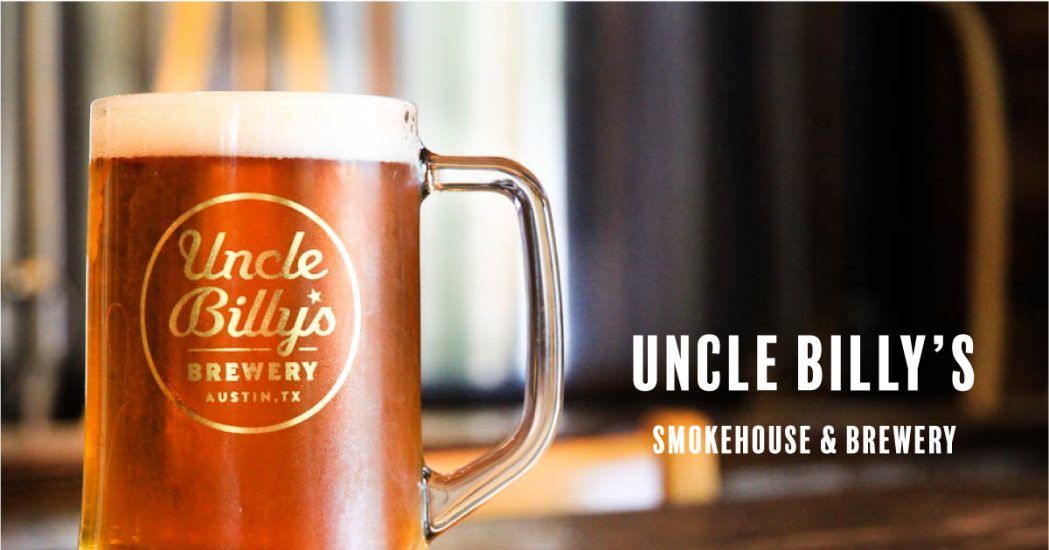 Uncle Billy’s Brewery in Austin, Texas is one of the oldest brewpubs in the city. This weekend, they’ll be celebrating 11 incredible years of brewing craft beer. The brewery and smokehouse will celebrate its 11th anniversary with a specially brewed Belgian Ale (plus, firkins!!) and a series of awesome events.

But more on that later…

Founded in 2006, Uncle Billy’s Brewery and Smokehouse in Austin is right in the middle of Barton Springs’s funky restaurant row. The brewery’s name is inspired by William “Uncle Billy” Barton, whose 1830’s tract included the renowned springs.

Uncle Billy’s has the perfect combination of slow-smoked Texas barbecue and award-winning craft beers. The current head brewer, Trevor Nearburg creates special brews so frequently, you can always bet on trying something new when you head down to Barton Springs for a visit.

Over the years, Uncle Billy’s has produced dozens of styles of beers, but currently they have three year-round brews being distributed throughout Texas: Lazy Day Lager, The Green Room IPA, and Barton Springs Pale Ale.

All three of Uncle Billy’s current core beers were created and designed to represent the best things about Austin. When I sat down with Uncle Billy’s head brewer, Trevor Nearburg, he described them to me perfectly.

The Barton Springs Pale Ale is the “go-to, everyday beer,” but he suggests drinking the malty, slighty hoppy Lazy Day Lager on hot Austin days when you’re hanging out on the water. Finally, he explained that The Green Room is a solid, “middle-ground beer with great flavor.”

Most Austinites have their favorite Uncle Billy’s core beer, Lazy Day is my go-to, but the Green Room IPA is Uncle Billy’s original. Named after the city’s reputation as the Live Music Capital of the Word, it’s a solid beer that has helped countless musicians get ready for their Austin shows.

The original Green Room IPA recipe was reworked when Trevor came on as head brewer a few years ago. In order to make a beer that is easy and fun to drink back-to-back, they worked on toning down the hoppiness while keep the same hop profile and high ABV.

During our visit, every tank inside the brewpub was filled with Green Room IPA. Not to mention the 80 barrel fermenter outside that is just for Uncle Billy’s Lazy Day. Those are both beers that the brewery distributes (along with the Barton Springs pale ale) and keeping up with the market demand is restrictive at times.

Keeping up with the market demand for their core beers doesn’t mean Uncle Billy’s Brewery in Austin isn’t experimenting with new styles. Head Brewer, Trevor Nearburg, is very much into the brewing process, telling me, “as long as my beers aren’t flawed I can get away with experimentation.”

Good thing he has the process down; Trevor loves experimenting and brewing different beers as often as he can.

One great result of those experiments is their recent Brew Oyster Cult, an oyster stout I got to try that I totally hogged all for myself. :) Uncle Billy’s brewers are also working on a coffee IPA that I am super curious to try.

Another craft beer I loved during my recent visit to Uncle Billy’s was their ‘happy mistake’ Crazy Day lager. It was the result of one of Uncle Billy’s brewers mishearing Trevor and accidentally adding 50% more malts into a batch of Lazy Day. They went with the flow and the outcome tasted delicious, and strong. Unlike Lazy Day, the Crazy Day lager packs a punch at 8% ABV.

Uncle Billy’s Head Brewer, Trevor Nearburg, joined the team in 2014 after working his way up the ranks in Austin’s craft beer scene. Before all of that he was working a “soul-sucking” NYC finance job. He didn’t last long before quitting to explore other passions.

After long days at the office, he usually headed out to happy hours with friends. One friend in particular had a huge impact on the future head brewer’s interest in craft beer by introducing him to some of the best Belgian craft beer bars in New York City.

In those days, he wasn’t too familiar with American craft beers and homebrewing. That is, until Trevor tasted an Allagash Dubbel Ale and then everything changed. The dubbel wasn’t his first craft beer, but it was the first one that left him wondering, “how did I not know this existed?!“

As Trevor continued developing his love for craft beer, his brother entered the ‘real world’ and felt he had to leave his college homebrewing hobby behind. So he passed down his kit to his brother. Trevor made good use of the kit, diving head first learning everything he could about craft beer.

Trevor began reading beer blogs, going to festivals and special releases, and traveling to cities just to visit breweries. All of those great experiences and adventures learning about craft beer really stuck with him as he worked on his homebrewing.

Good Things Come to Those Who Bust Their Ass

Five years ago, after moving back to his Native Texas, Trevor was on a mission to find a brewery to volunteer with. That’s when he met Bob of Hops & Grain in east Austin, who was the volunteer coordinator in those days.

After being a Hops & Grains volunteer for awhile, they were about to offer Trevor a permanent spot on the team when Real Ale in Blanco offered jobs to both him and his brother.

The two are incredibly humble about being financially able to start on the packaging line at Real Ale to work their way up. They did so in order to further their brewing knowledge and understanding how a brewery is run.

Through Trevor’s new connections in the Austin craft beer scene, he was introduced to Uncle Billy’s co-founder, Rick Engel. One beautiful spring day in particular, Rick invited him to come check out Uncle Billy’s on Barton Springs.

The two hit it off right away. One thing they felt strongly about was creating beers with emotional ties. When they were talking about Uncle Billy’s packaging, they were discussing how to capture the mood and feeling of living in Austin.

Engel ended up inviting him to join the team and assist with the brewery’s distribution program. Now, Trevor is well-adjusted to his role as headbrewer at Uncle Billy’s. And he’s making a name for himself in the industry by keeping things exciting with the brewery’s ever-changing and reliably solid taplist.

This year Uncle Billy’s Brewery & Smokehouse in Austin, Texas is planning a weekend full of exciting evens as they celebrate their 11th anniversary. To commemorate the milestone, Trevor created a light and dry Belgian Saison Ale.

He described the special release Saison as a refreshing brew with “fruity esters and spicy phenols from the Belgian yeast.” Since it was dry hopped with St. Celia hops to highlight the floral and sweet spice flavors, it sounds like it will be a perfect beer for hot summer days.

The Belgian Saison will be released this Thursday, May 4th at Uncle Billy’s Honkey Tonk Happy Hour.

Come back Friday though, 5pm specifically. That’s when Trevor is tapping two special firkins using the Belgian Saison, before it was dry hopped. The first is aged with charred oak and dandelion greens. The second firkin is infused with dried apricots and blackberries.

The celebrations don’t stop there. Check out the complete list of weekend events to celebrate Uncle Billy’s 11th Anniversary!

Uncle Billy’s brewpub is incredibly dog-friendly, your dog will love their delicious spent-grain treats! Plus, there’s always a great happy hour or event going on. So head down to Barton Springs to try out some of these beers firsthand (and I didn’t even mentioned their delicious Texas barbecue)! 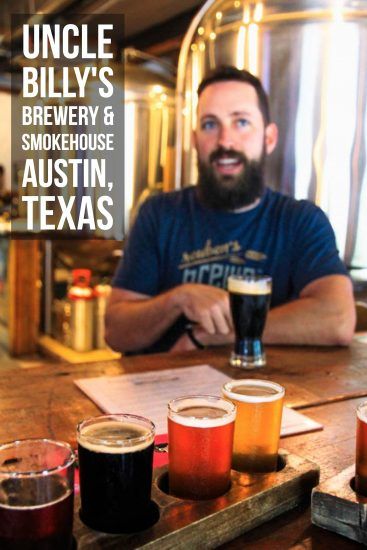 What’s your favorite of Uncle Billy’s core beers? Let me know in the comments!

A special thanks to Pen and Tell Us Agency for setting up this interview and especially Trevor Nearburg for taking time to talk to me and showing me your craft beer!