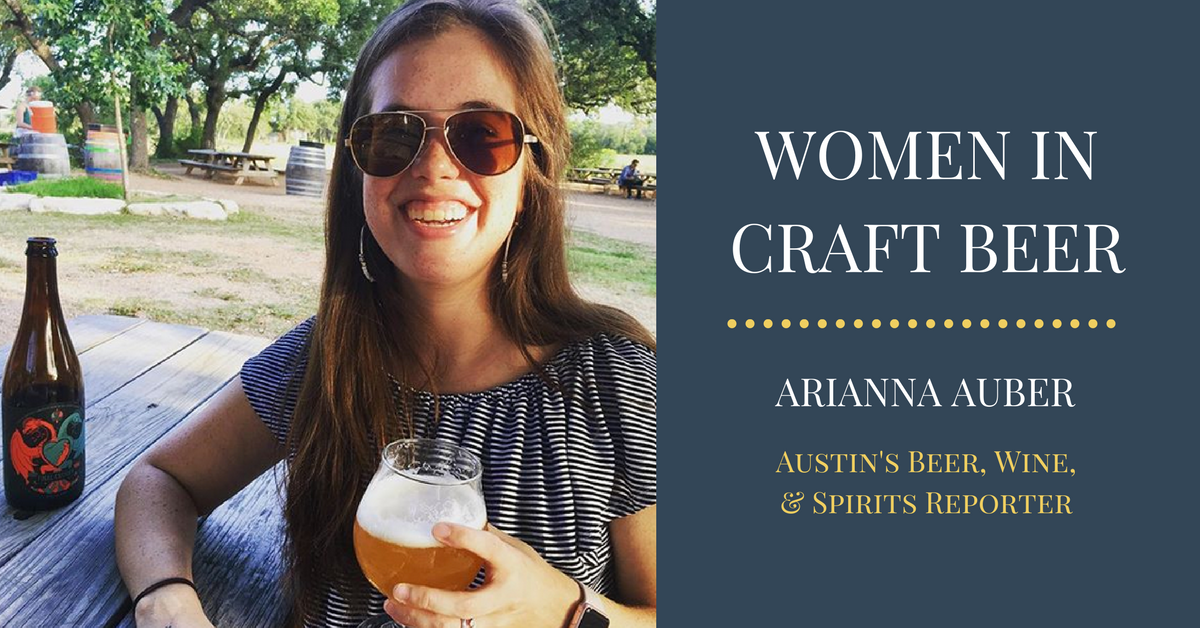 Keeping up with beer news is hard, especially in Austin, Texas where we see new breweries and distilleries pop up left and right. But there’s one woman in Austin who is on top of it all.

A few days before the craziness of SXSW kicked in, I met up with Arianna Auber for a quick chat. As the beer, spirits, and wine writer for the Austin American-Statesman, the city’s major daily newspaper, she keeps us all in the know when it comes to booze.

Arianna and I met for a beer at Hi-Hat Public House in East Austin, where she grabbed the latest release from Austin Beerworks, Flavor Country, a hoppy pale ale and I, a Primus Weizenbock from Live Oak. As a beer blogger and writer myself, I wanted to talk to her about so many things:

She answered all my nosey questions and a few others, and now I get to share the interview with you! 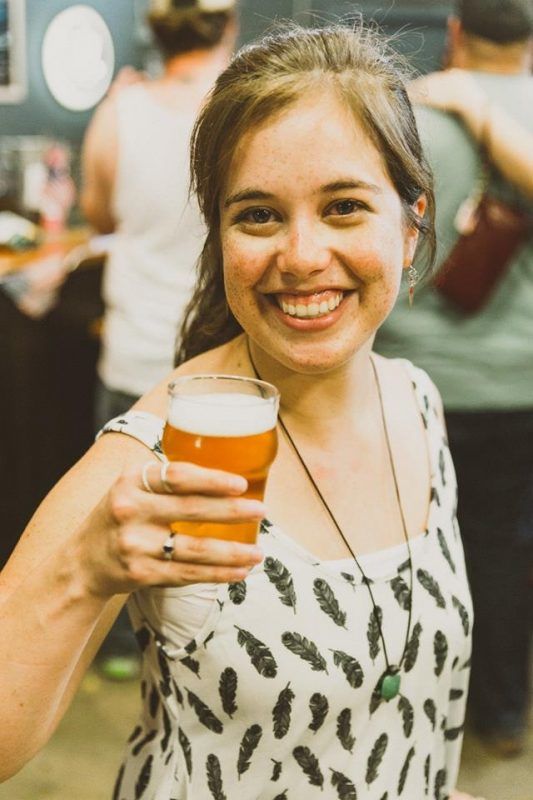 Photo courtesy of The Second Shooter

How did you start writing about beer?

Arianna: Actually so, Bitch Beer was basically how I got into beer. My friends and I were all editors or writers at Hilltop Views, the student newspaper at St. Edward’s University. We wanted a way to kind of hangout outside of work and so, we started going to local breweries and stuff. Then we noticed you know, there’s not really a whole bunch of women here just on their own like we are. There here with like, their boyfriend or not at all. So, in 2012, we formed Bitch Beer just kind of as a way to bring women into beer.

Above, Arianna Auber and Caroline Wallace, two bad-ass ladies and part of the founding team at Bitch Beer.

When did you start working at the Austin-Statesman? Was being the beverage reporter a role you stepped into?

Arianna: That was a role I stepped into eventually. I started the Statesman actually the same month that we started the [Bitch Beer] blog. But I started as an editorial assistant of the Statesman just kind of writing whatever they would let me write about. So it was like, almost another two years for Emma Janzen, she was the original Liquid Austin writer. She is with in Imbibe now and is one of their editors.  She left for Chicago and the position basically opened up and they knew I had already experience with Bitch Beer and like, “Here, it’s yours.”

What’s it like to cover beer and spirits for Austin, one of the ‘drunkest cities in the country’?

Arianna: Honestly I have trouble just keeping up with all of it because there’s something new everyday. I always find out, “Oh my gosh, I miss something sometimes,” which is never fun but it’s just what happens. Then you know, you’re always having to look, keep an eye on social media and you get emails about things happening. You have to kind of also just be out there and so, it can be kind of exhausting.

Arianna: The craziest just because of what it was last month with Family Business Beer Co. So, that was an interesting story. Normally we get readers [at the Statesman] because they like beer and what’s going on in Austin. In this case, it was a bunch of Supernatural fans from all over the world, you know? I had never watched an episode of the show but I mean, he [owner, Jense Ackles] was really nice and everything. It was fun talking to him about beer too, he knows his beer.

One of my favorite [stories] I’ve done was when Real Ale turned twenty a couple years ago. That was so much fun because it was kind of like, a look back through their twenty years so it was like you know, back– like, talking to people like the guy who had actually essentially invented the Fireman’s #4 recipe.

Has anyone made assumptions about your experience and knowledge because you’re a woman?

Arianna: A couple of times, you know? It hasn’t happened in awhile I think, because people know me now. They know my name and who I am and what I cover and stuff? But I do remember a couple of instances in when I was still with Bitch Beer and we would go to a bar or something and we would get mansplained like, I’m like, “Hold on. Hold on.”

Arianna: I think, I hope so. Sometimes, I do still hear, “Oh yes, we carry wine for the women.” I don’t say anything but it’s like, “Don’t say those things anymore because it’s not.” For me, personally, if I have a choice of beer, wine or spirits on the menu, I’m going to choose a beer, you know?

As one of Austin’s top craft beer and beverage writers, where do you go for beer news?

Arianna: If I’m looking for like a kind of drinks trend piece or inspiration for that, I love PUNCH. Also, I’m always keeping an eye out on my fellow beer writers like you and then, Eric Puga he writes for the Austin Chronicle, he’s great. Austin Beer Guide always has something too. Just constantly, constantly reading.

What’s the best beer to drink when writing?

Arianna: Generally, it’s whatever I have in my fridge at the house which a lot of times is often stocked with Austin Beerworks.

What are some of your favorite places to go and write outside of the office?

Arianna: I love going to St. Elmo Brewing on Friday’s. They have like, a two-dollar Carl can then you could get a chicken sandwich for like six-bucks at the food truck, Soursop. Friday is also when they like, release their latest beer, you know?  Oh, that’s my favorite. [Carl Kolsch] That’s my all-time favorite beer, it’s really good. It’s like, I probably shouldn’t tell you that I have a favorite beer but that’s my favorite beer.

What do you drink when you’re not drinking beer?

Arianna: Lately, my husband and I have been drinking a lot of wine actually. We had a really good Texas wine from William Chris the other night, yes. It was a Mourvedre.

BWSG: What are some of the wines that you think Texas does right?

Arianna: Well, I would say Mourvedre is one of them for sure. Tempranillo, everybody will tell you it’s like basically between– as far as red grapes go it’s between like, Tempranillo, Mourvedre and like, Tannat. Just about I’d say every big Texas winery  well, not big — but you know, significant Texas Winery is making at least one of those wines.

I’m sure you’ve been kept busy with all the new brewery openings in the area, but which one are you most excited about?

Arianna: So, I checked out Oddwood for the first time this weekend, and fantastic place. It’s kind of got this like cabin-vibe to it a little bit. They have fantastic beers!

You can keep up with Arianna and her adventures covering Austin’s beer, wine, and spirit scene by following along with her on Twitter and Instagram.

Want more interviews from my 2018 Austin Women in Craft Beer series? Keep checking back all during the month of March for the latest stories. Or, you’ll never be out of the loop if you follow me on Instagram and like my page on Facebook!