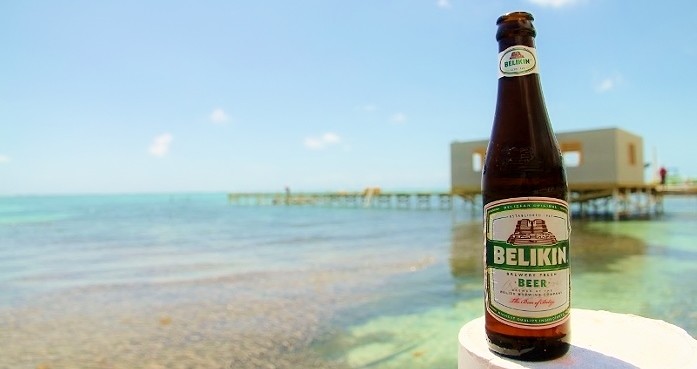 Discovering each country’s unique food and drinks is hands-down, one of the best parts of traveling. Even though Belize is a tiny country of about 300,000 in Central America, it’s a huge fusion of several unique cultures.

All of these Belizean cultures come through in their dishes. Traditional Belize food and drinks include an incredible amount of local, fresh seafood options (especially if you  love lobster). All of the typical Belizean dishes pair perfectly with the ever-flowing Caribbean rum punch and Belikin beer.

If you’re traveling or vacationing to Belize, here’s what you need to know about the traditional Belize food and drinks: 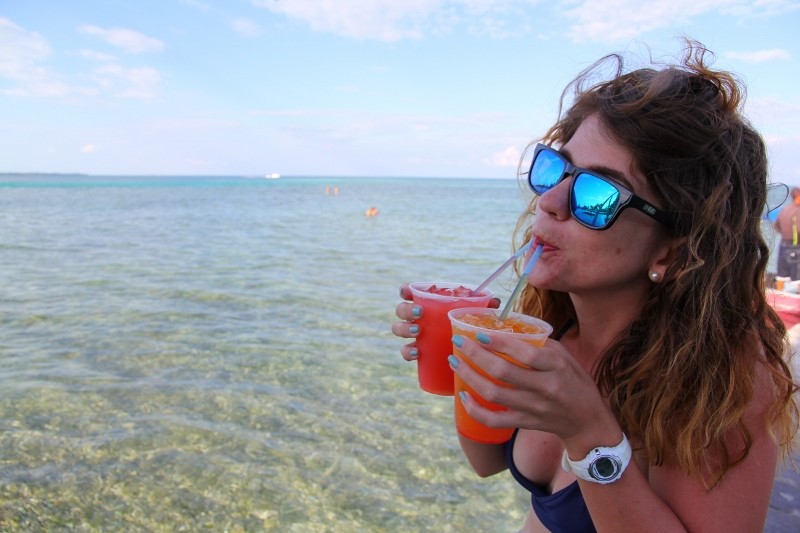 Trying out both a Panty Rippa and Rum Punch after a long, slightly terrifying day of snorkeling. Also, yes, there’s some slight sunburn :)

Drinking in Belize & What to Know

There’s two things to know about drinks in Belize: Belikin Beer and Rum Punch. Ok, actually there’s a ton of other great Belizean drinks and cocktails but those are going to be a constant companion for you here.

Rum Punch is light and dark rum mixed with cream of coconut, sours mix, grenadine and is topped off pineapple juice. If you love rum, pineapple, or have a pulse, you’ll love this.

The drink’s coconut flavor is so subtle thanks to the sours mix. You can grab a recipe for Belize Rum Punch here. 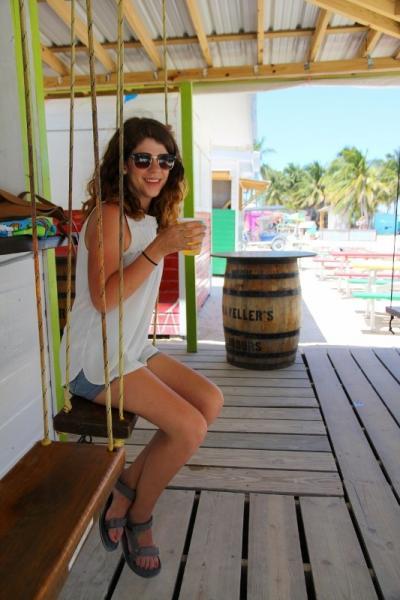 Top off a shot or two of coconut rum with pineapple juice, and you have a Panty Rippa! Here’s a link to a more official recipe.

Around Belize, a single drink usually runs for $2-4 US dollars, depending on where you go (tourist vs local). There’s usually great happy hour specials for local rums running about $1-3 US dollars for a drink.

If you’re wanting a bottle of your own Caribbean rum, you won’t need to spend more than 10 or 15 bucks.

Myself, and many others will recommend Barrel 1. Some do say it is a bit sweet, with too much vanilla for their personal tastes.

Finally, another popular Belize drink option is some of the homemade wines that you can find throughout country.

If you’re buying local wine in shops, stick to Marie Sharp’s. She’s making a wide variety of wines using local ingredients such as sorrel and cashew. These wines are pretty sweet, but I loved them!

In the more rural areas of the country,  homemade fruit wines are a bit like hard cider. Take caution with these homemade wines though. Buying from a roadside vendor might mean they made the wine with contaminated water that’ll upset your stomach! 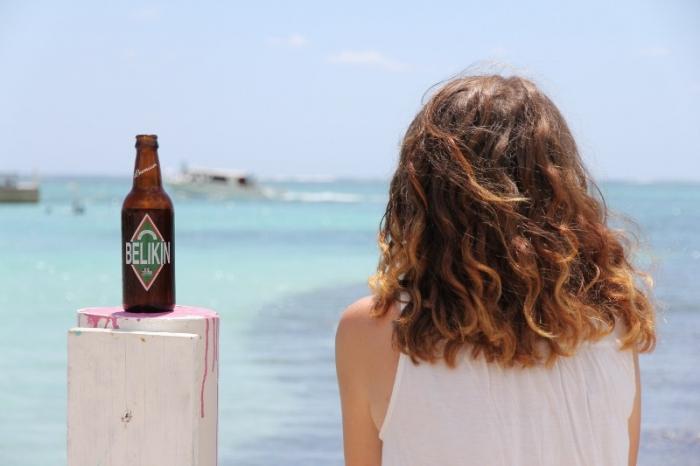 For my craft beer lovers, you won’t have any craft breweries to visit when you vacation to Belize.  Though there is one big beer company in the country and they’re brewing all of Belize’s beers.

Beliken beer is the “National Beer of Belize.” They brew two main styles of beer: Belikin Lager and Belikin Stout. Both are full-bodied, hearty beers. The recipes and original brew masters all came from Germany. 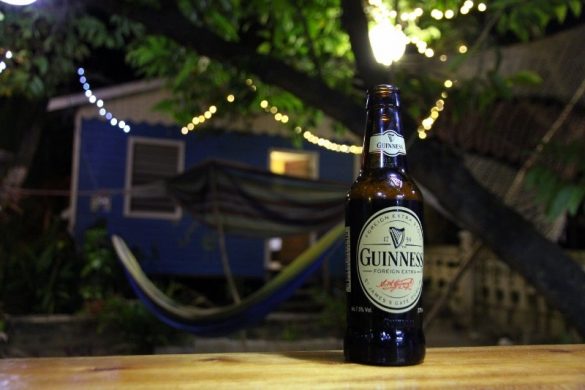 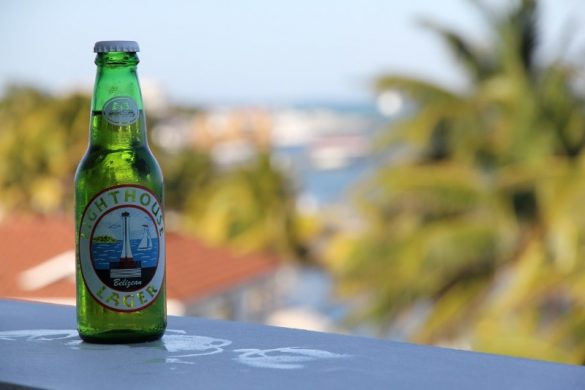 Belikin is also behind Lighthouse Lager, which is a lighter beer that tastes pretty bad. Also, Belikin bottles a locally produced Guinness Foreign Extra Stout that has a ‘full body and taste.’ Standard flavors, but the beer doesn’t taste bad.

If I had to rank these beers Belikin Stout would be at the top. Belikin’s Lager is pretty damn good though for a cheap Central American brew.

The Guinness usually runs a bit more expensive than Belikin, so that’d be my third choice. Lighthouse Lager though… you’ll just want to steer clear of that! 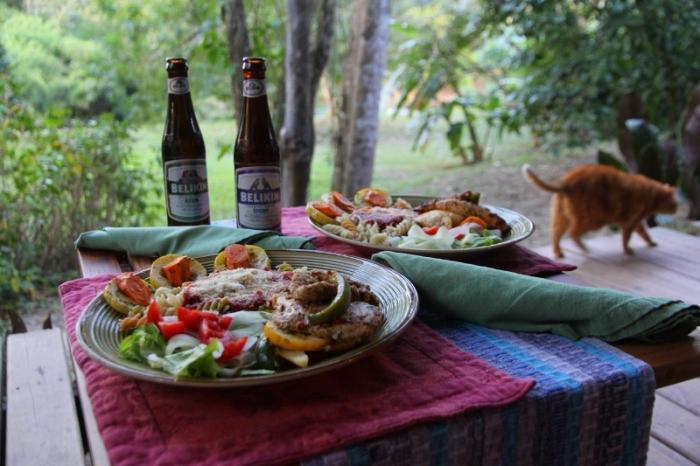 One of our final meals of our trip/ PLUS, a photobomb from the fattest cat ever. Dinner served at Parrot’s Nest Lodge in Bullet Tree Road, a small village just outside of San Ignacio, Belize.

The small country has a mix of Caribbean, Mexican, African, Spanish, and Mayan cultures which play a huge influence in the traditional Belizean dishes.

Belize is a seafood lover’s paradise. With all of its fresh fish, lobster, shrimp, and conch widely available at cheap prices, you won’t run out of options.

Belize Travel Tip: Don’t wait till evening to order a specific seafood dish. Since it is fresh, a restaurant’s supply depends of what/how much the fishers caught that day.

Belize has historically been a huge exporter of lobster, but recent over-harvesting has caused the population to decline. So now you can only get it in season, which runs from  from June 15 to February 14.. Though it will still be relatively inexpensive.

Additionally, rice and (red) beans is a major staple. So expect it as a side at every meal. 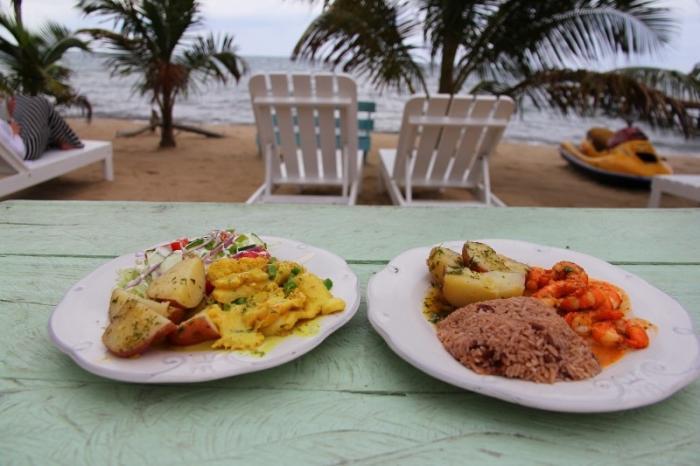 Belizean Curry Conch and Creole Shrimp at Hopkins Beach, so good and fresh! All flavors that have been influenced by the Garifuna culture. 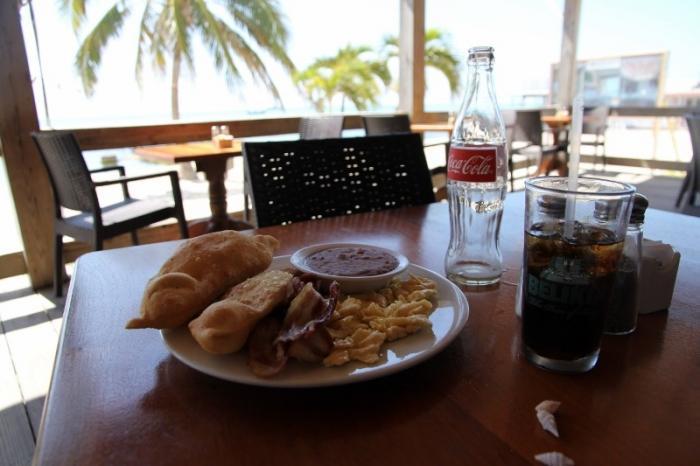 Fry jacks are the deep-fried, puffy things on the left!

Another awesome Belize food, that’s very distinct to the country are fry jacks! They’re usually eaten for breakfast accompanied by refried beans, sausage, bacon and eggs. I recommend ripping the corner off and stuffing all those ingredients inside. #PROtip

My Picks for the Best, Can’t-Miss, Dishes and Restaurants in Belize

Laid back, casual restaurant offering a new flavor of Caribbean food using the freshest local ingredients. Not only is the food great, but so is the company. You’ll definitely feel like you’ve stepped into the neighborhood BBQ joint at Geckos! The food is cheap and good, and their drink selection is pretty legendary. 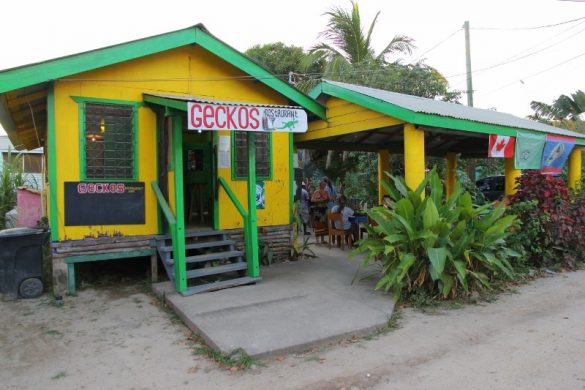 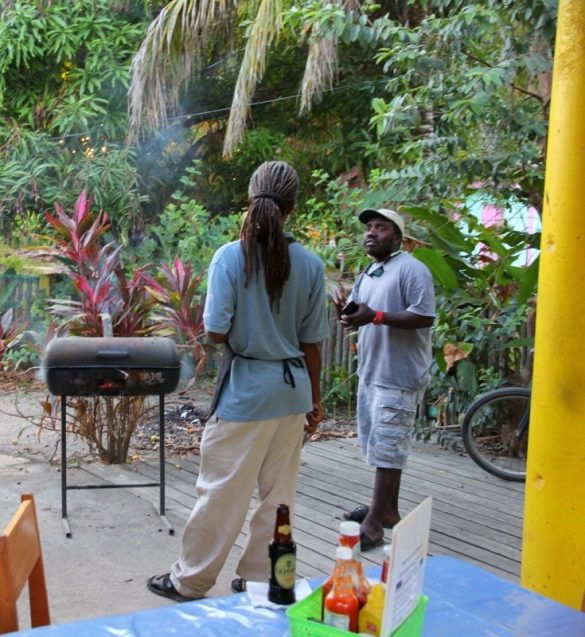 This is an awesome place to come to buy local fruits and veggies, as well as fresh, inexpensive empanadas and pupusas.  Open just about everyday, the farmer’s market is best to visit on a Saturday morning. Additionally, the place normally shuts down by 4pm, and Sunday, most stalls are closed. 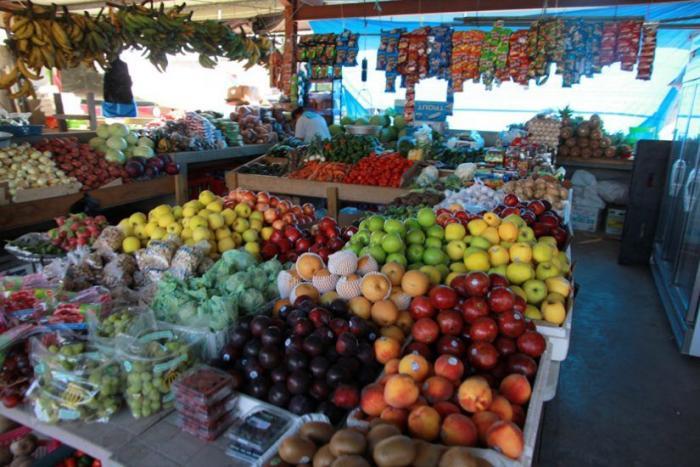 The Country Barn Ice Cream on the way to San Ignacio

Traveling to San Ignacio, we came across the CUTEST little ice cream shack in the middle of the mountains. For $.50 cents you can get fresh black cherry, or whatever flavors they have that day, ice cream right from the cows out back.  Plus milkshakes, goat cheese, and fresh milk. Either way, you’ll most definitely pass it on your way to San Ignacio, so don’t miss it! 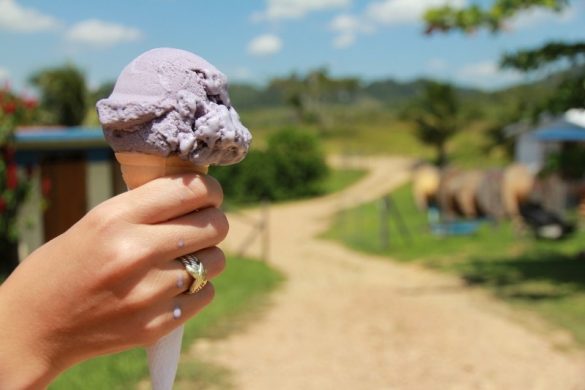 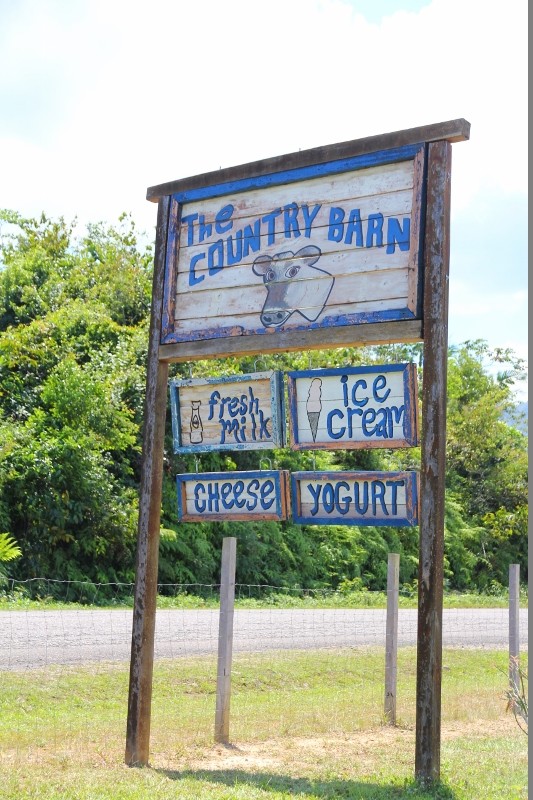 You’ll most likely work up an appetite climbing exploring the Xunantunich ruins near San Igancio. When you ask any local or tour guide for a lunch recommendation, every single one of them will tell you to “follow the signs to Benny’s Kitchen.”

Benny’s is a staple and the menu is extensive and cheap. Since they’re just a few minutes away from the Guatemalan border, there’s a big influence of that country’s cultures in the dishes.

It’s a huge spot, tons of seating, and they welcome everyone from locals to travelers. 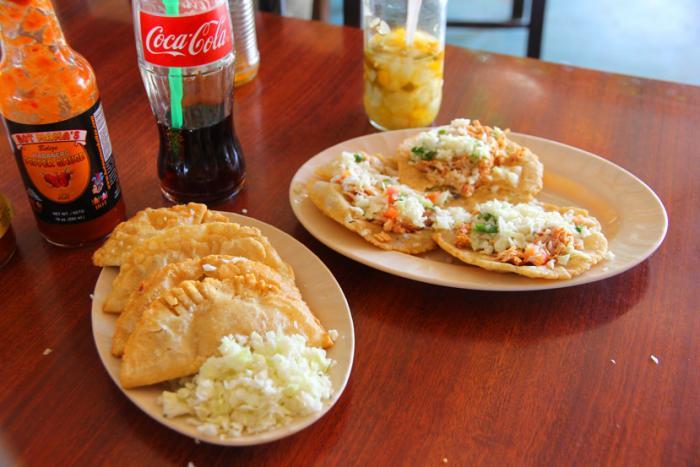 At AJAX Chocolate & Crafts Making chocolate like the Mayans! This is something I’ve wanted to do for so long! You think after all the time I’ve spent in Central America, it would have happened by now. Well, I’m glad I waited until I was in Belize.

AJAW gave us such a great, educational, hands-on, tasty experience. Check em out, tours are offered daily, on the hour, for $35 US dollars per person!

When you’re traveling to San Igancio, check out here tourist center where for $5US  you can taste her entire line-up of products. Including all of her hot sauces, jellys, and new line of wines. 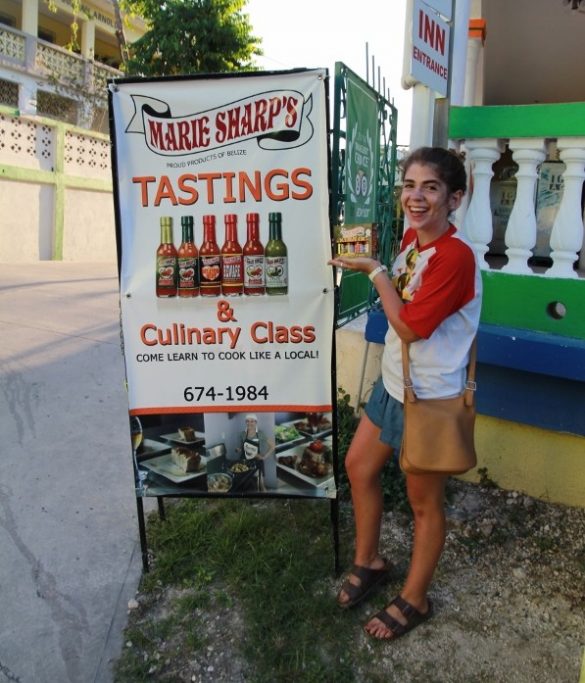 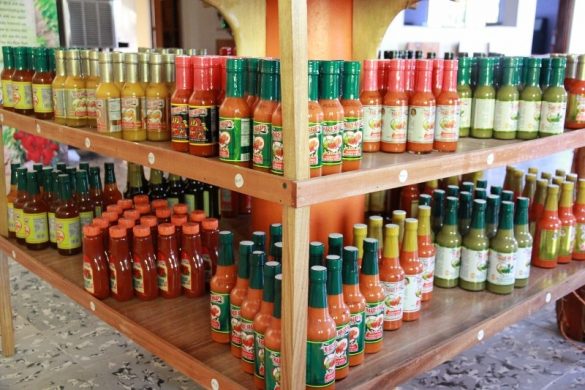 Have you guys ever been to Belize? What was your favorite beer or best meal?! Let me know in the comments. 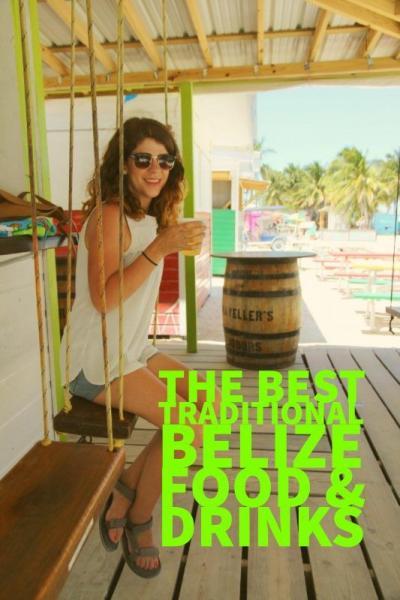 Want more Belize!? I have you covered:

Things To Do in Fajardo, Puerto Rico |...

Things To Do in Rincon, Puerto Rico |...

Things to Do in Puerto Rico: The Ultimate...

Culebra vs. Vieques: Which Puerto Rican Island Should...

What to Expect on a Guided Brewery Tour Through Austin

Tubi 60: the Israeli Liquor You Need to Taste ASAP